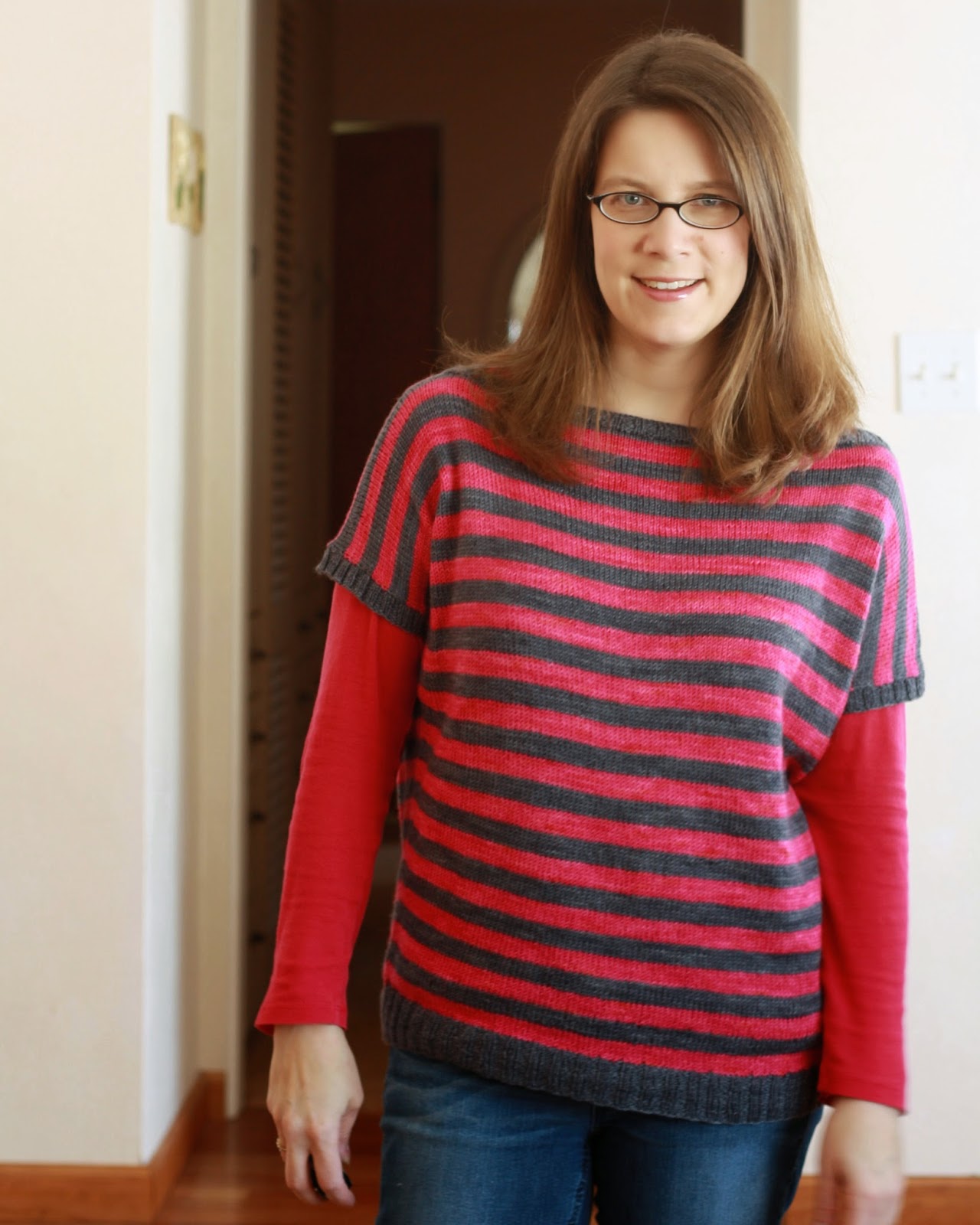 There's been a whole lot of knitting and not a lot of posting going on around here.  This winter has been chock full of projects...most of them samples for new patterns, but I did squeeze in a couple "fun knits".  This one was a quickie - it might have taken me a week.  It's a dolman-sleeve sweater made out of Three Irish Girls Adorn Sock yarn.  I happened to be loitering at my local yarn shop on a day they received a bit Three Irish Girls shipment.  I fell in love with the bright pink and bright turquoise yarns that I saw. They had a very 80's vibe to them.  I took a few days to make sure I knew what I wanted to do before I made my purchase, and when I saw this 80's-inspired sweater, I knew it would be a good match.  I couldn't bring myself to go full-on 80's pink & turquoise stripes though, so I just went with one of those colors and mixed it with a nice gray from the TIG collection. 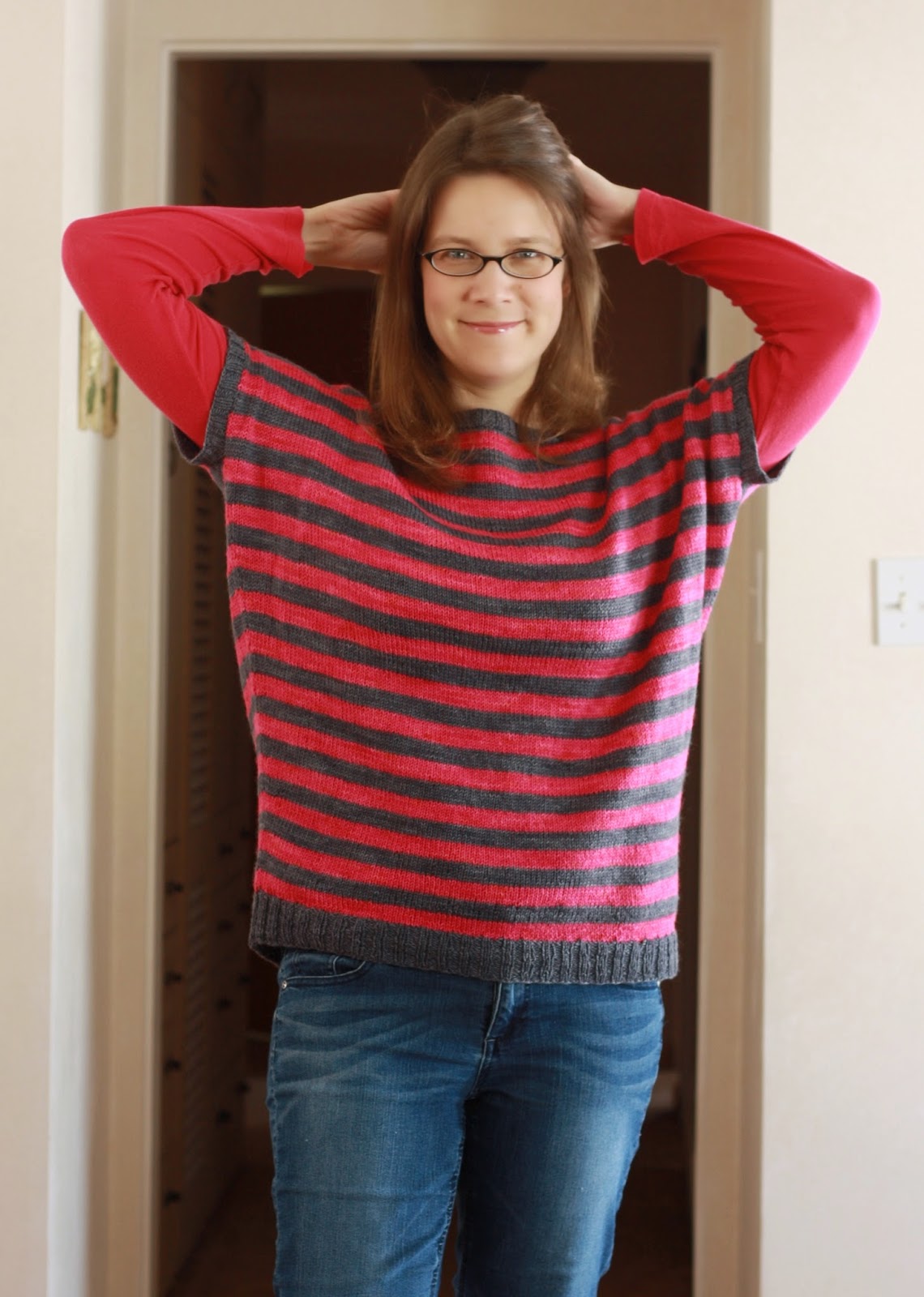 This is a super, super simple design.  The sleeves are not knit separately - the sweater is basically a rectangle that gets wider toward the top, and the sleeves just grow out of the extra ease built in from all the side increases.


I believe my stripes were 6 rows each, which makes them a little less than an inch wide.  This sweater is great for wearing over a long-sleeve t-shirt in cold weather (it was my favorite "running errands" outfit in the dead of winter because I was warm, but this wasn't bulky under my coat like a bigger sweater would have been.  It's also great for wearing over a tank top in warmer weather.  The fingering-weight yarn makes it quite a versatile piece.

I did a minor modification to the neckline.  Rather than picking stitches up in a circle around the neck, I worked a flat ribbed strip along the front neckline and another along the back neckline, then stitched the down, overlapping at the sides of the neck.  For me, this helped close up the neckline just enough that I can usually keep this sweater up on my shoulders.  The neckline width is easy enough to adjust though - you'd just need to bind off more or less stitches for the neckline, making sure it's evenly centered across the bind-off row.  If I made this top again, I would knit a few extra rows after the neckline bind-off just to drop the neck down an inch or two because right now it does sit a little higher on my chest than I really like.

Posted by Nicole at 5:42 PM No comments: 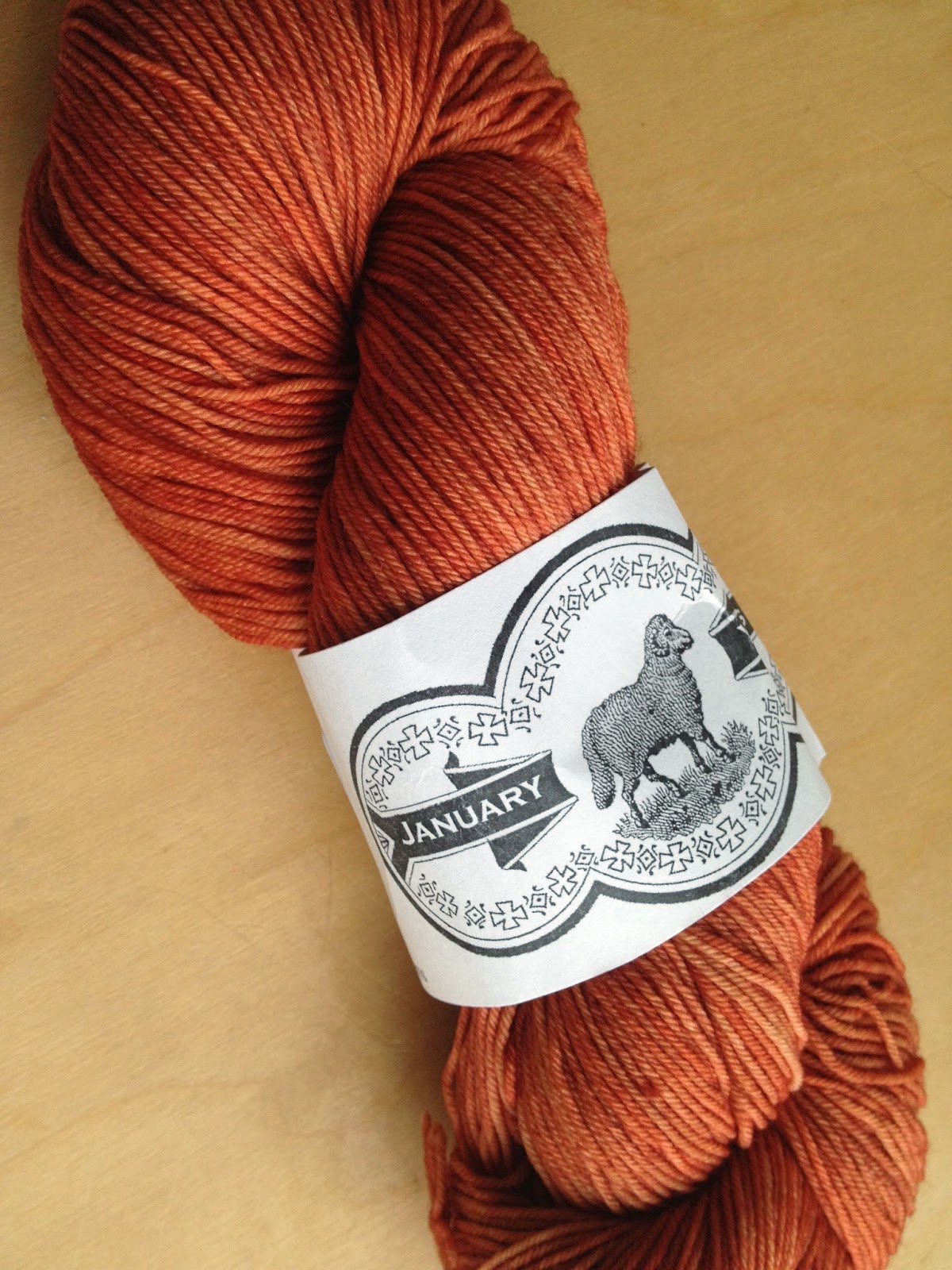 A couple months ago, I had just released the Snowy hat pattern.  One of my Knit Night friends was making one for herself and she brought the yarn she had ordered to Knit Night.  She had two gorgeous skeins of 100% merino in a tonal gray and a tonal red.  I picked up a skein, looked at the beautiful depth of color and felt how soft it was and said, "Oh!  You picked up some madelinetosh dk?"

I was very surprised when she told me that nope, it was from an Etsy shop called "January Yarns".  Honestly, even after she told me it wasn't madelinetosh yarn, if you put a skein of that next to a skein of the merino dk yarn from this Etsy shop, I am not confident at all that I would be able to tell them apart.  The shop quickly went to the top of my "New Yarns I Need to Try" list. 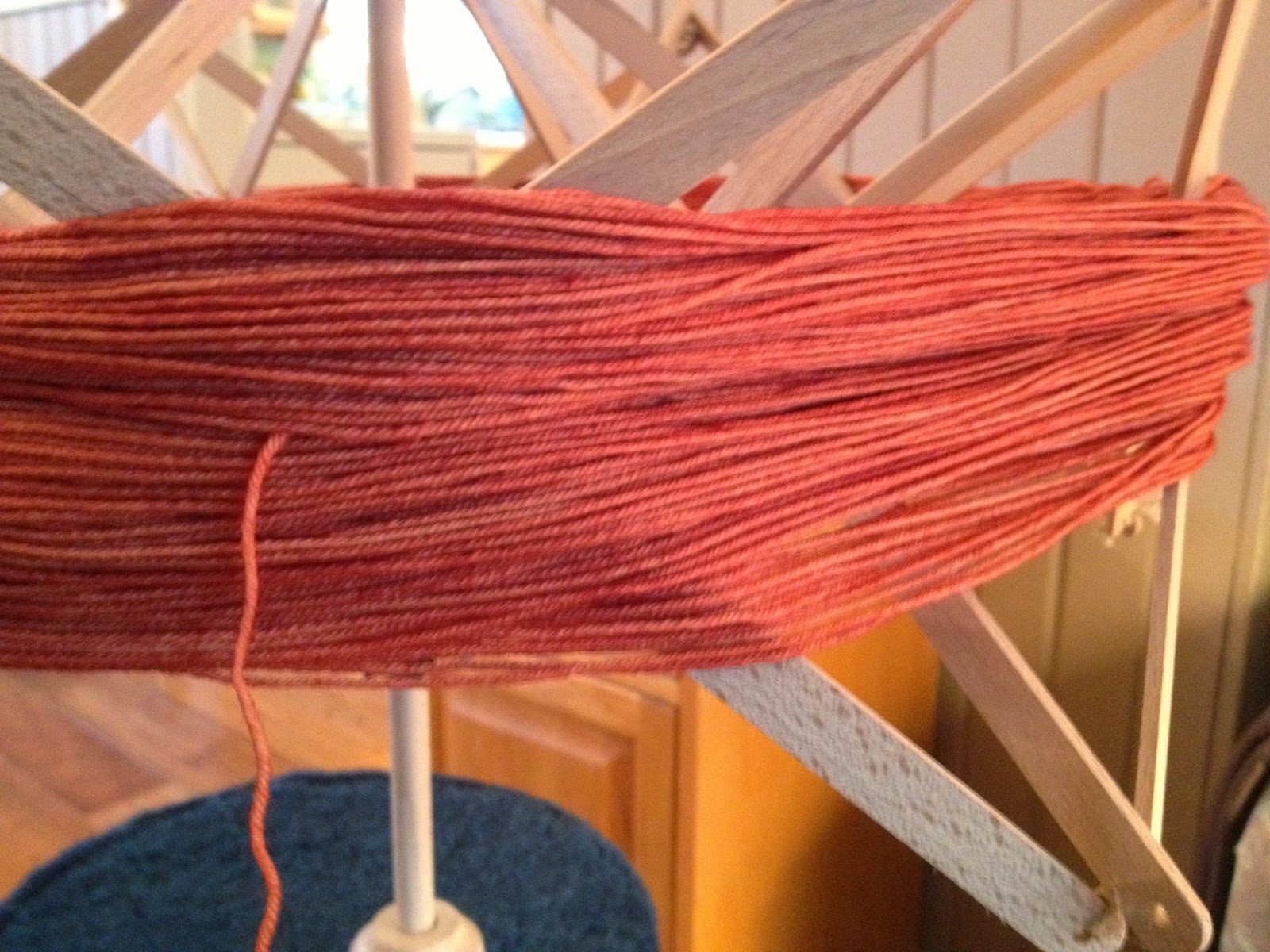 Imagine my surprise when a couple days later, I noticed in my "User Activity" feed on Ravelry that a Ravelry user by the name of "JanuaryYarns" had put my new Snowy Hat on her "Favorites" list.  When I saw that, it jogged my memory about seeing the yarn at Knit Night, so I sent her a little note saying I had seen a friend with some of her yarn and I thought it looked like it had outstanding quality.  She sent me back a message saying she liked my designs and if I ever wanted to propose something to her as a collaboration between her yarn and my designing, she would be open to that. 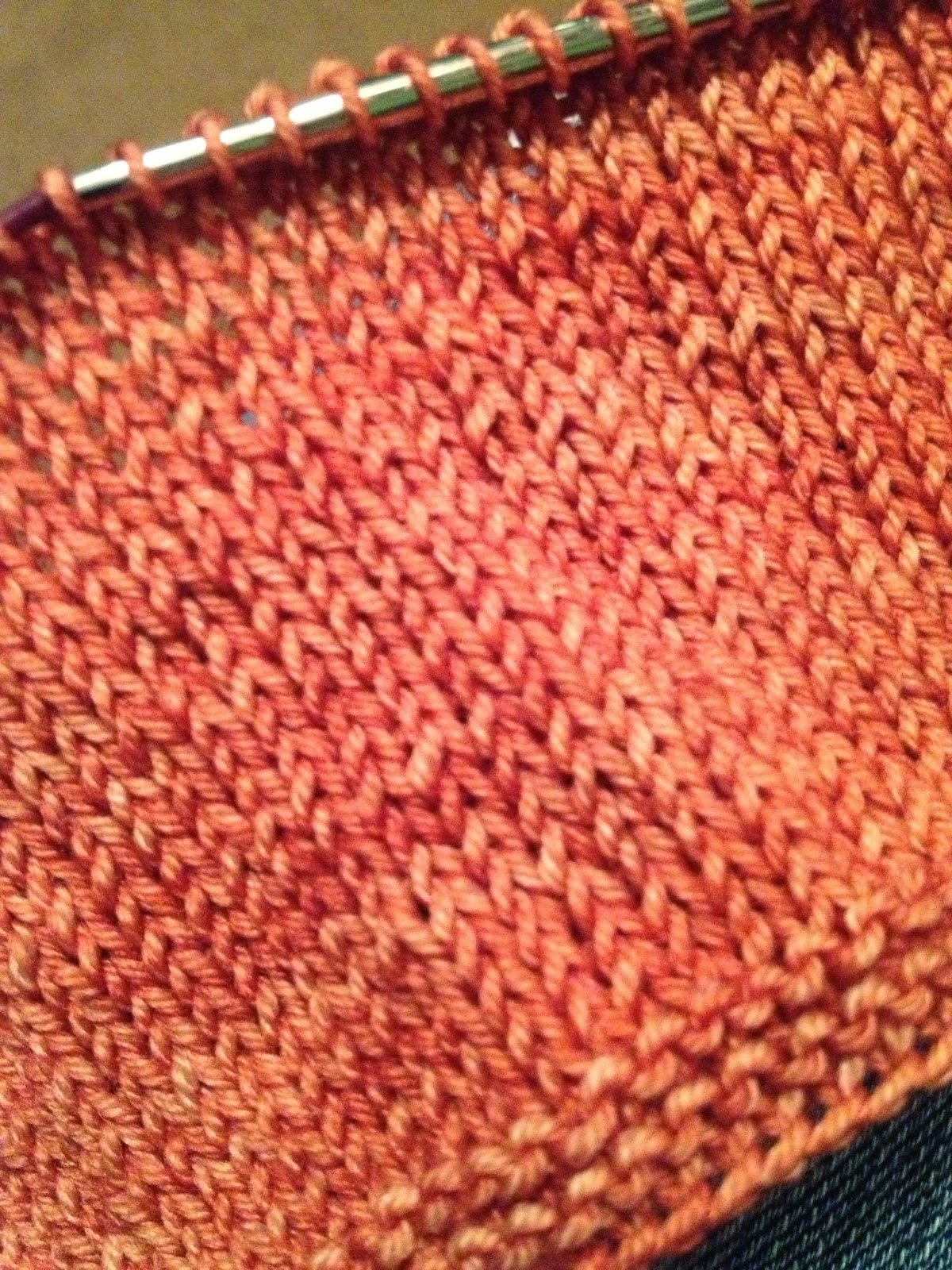 Well, she didn't have to ask me twice!  I thought I was going to be busy with projects through the summer, but as it turned out, one of the designs I thought I was going to pair with a yarn from my LYS didn't work out because of timing, but I knew it would be a good match to January Yarn's sock yarn.  I sent her a proposal and she responded quickly, then dyed 3 beautiful skeins that came out exactly as I would hoping they would.

Side note: See the yarn all stretched out on the yarn swift above?  I was SO happy that when I untied this hank of yarn, the strands were all untangled and very easy to wind into a cake.  Tangly yarn can be the bane of your existence, especially when you favor yarns on the thinner side that often come in skeins with 400+ yards in them.  There are definitely yarn companies out there that send out skeins that appear to have been thrown in the back of a pick-up truck, undone, and driven over hundreds of miles of roads that are full of potholes.  I've had moments with a few sock yarns where I think, "Ok, the time it's going to take me to untangle this is not worth the $20 I spent on this yarn."  But then I sit there and do it any way...I'm no stranger to spending an hour or two untangling yarn, rolling it into a ball so I can thread it in and out of the tangled strands, then finally winding it into a cake so I can knit from it.  What I'm trying to say here is THANK YOU, January Yarns, for sending us yarn that is actually a pleasure to work with from start to finish!

The Staple Sock yarn base that I'm using is a merino / nylon blend.  It is plump and soft and just a pleasure to knit with.  It is among the more "springy" sock yarns I've worked with - there is definitely a bit of bounce here.  The fabric this yarn creates isn't exactly elastic, but it does easily spring back into shape, and when I blocked my swatch the gauge only changed by 1 stitch over 4" before and after washing.

So I'm happily in the middle of knitting my sample for a new summer top.  Between this one and the one I just finished using a new linen yarn from my LYS (more on this one soon!) I'll have a couple fun new women's releases this summer!

I just noticed today that Webs is having an anniversary sale.  Included in the sale is  Elsebeth Lavold's Silky Wool, the yarn I chose when I wrote my Hearth Sweater for Girls pattern.  If you have any future plans for making that sweater you'll save $3 per skein if you order your yarn during this sale!

And that's just one of the 70 different yarns they have on sale.  I saw a cashmere blend and a cotton blend that I'm thinking about ordering.  Lots of good cotton, linen & tencel yarns...those fibers might be good choices for whatever summer projects you are planning.

Happy Hunting!
Posted by Nicole at 2:57 PM No comments: 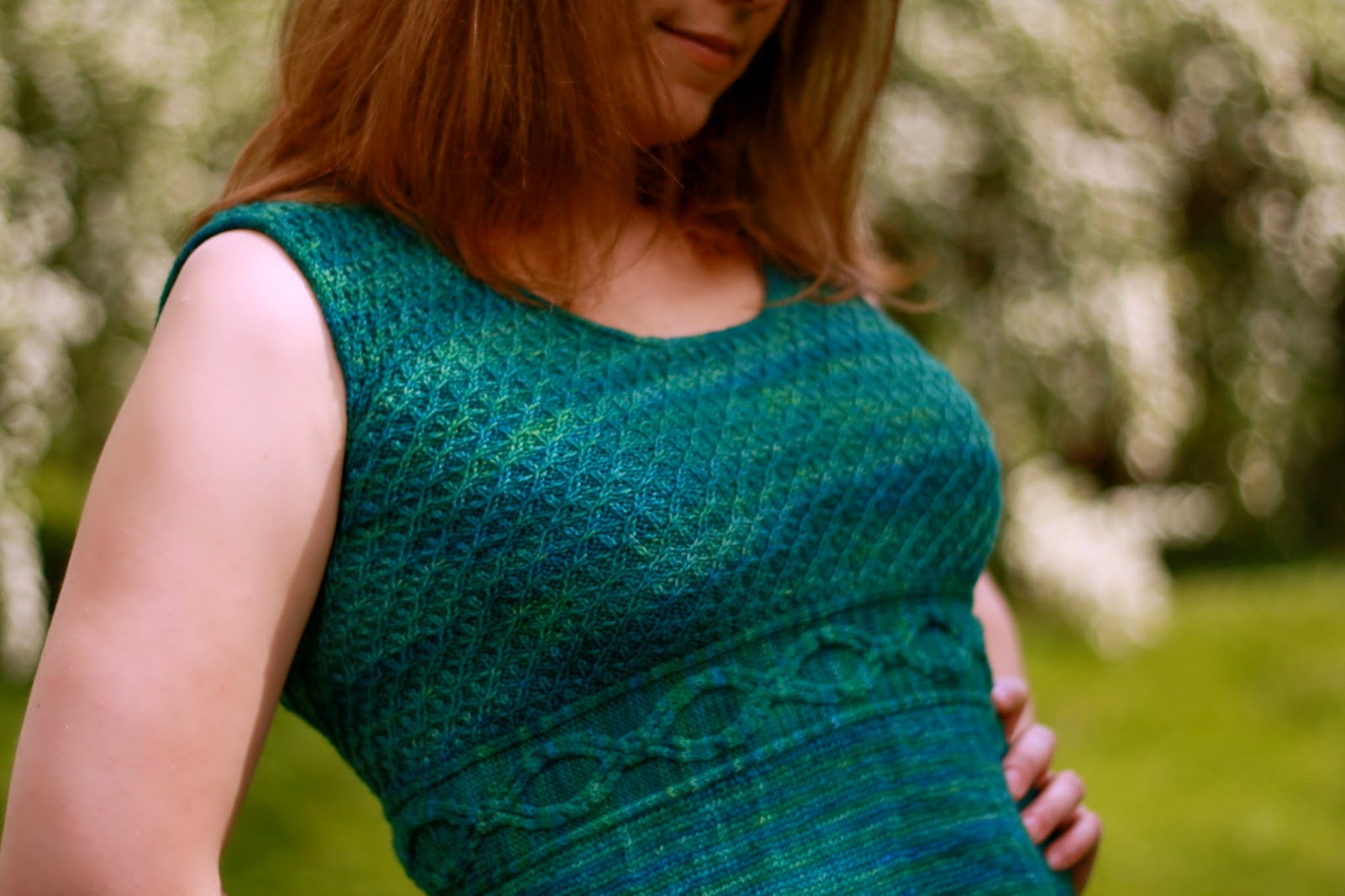 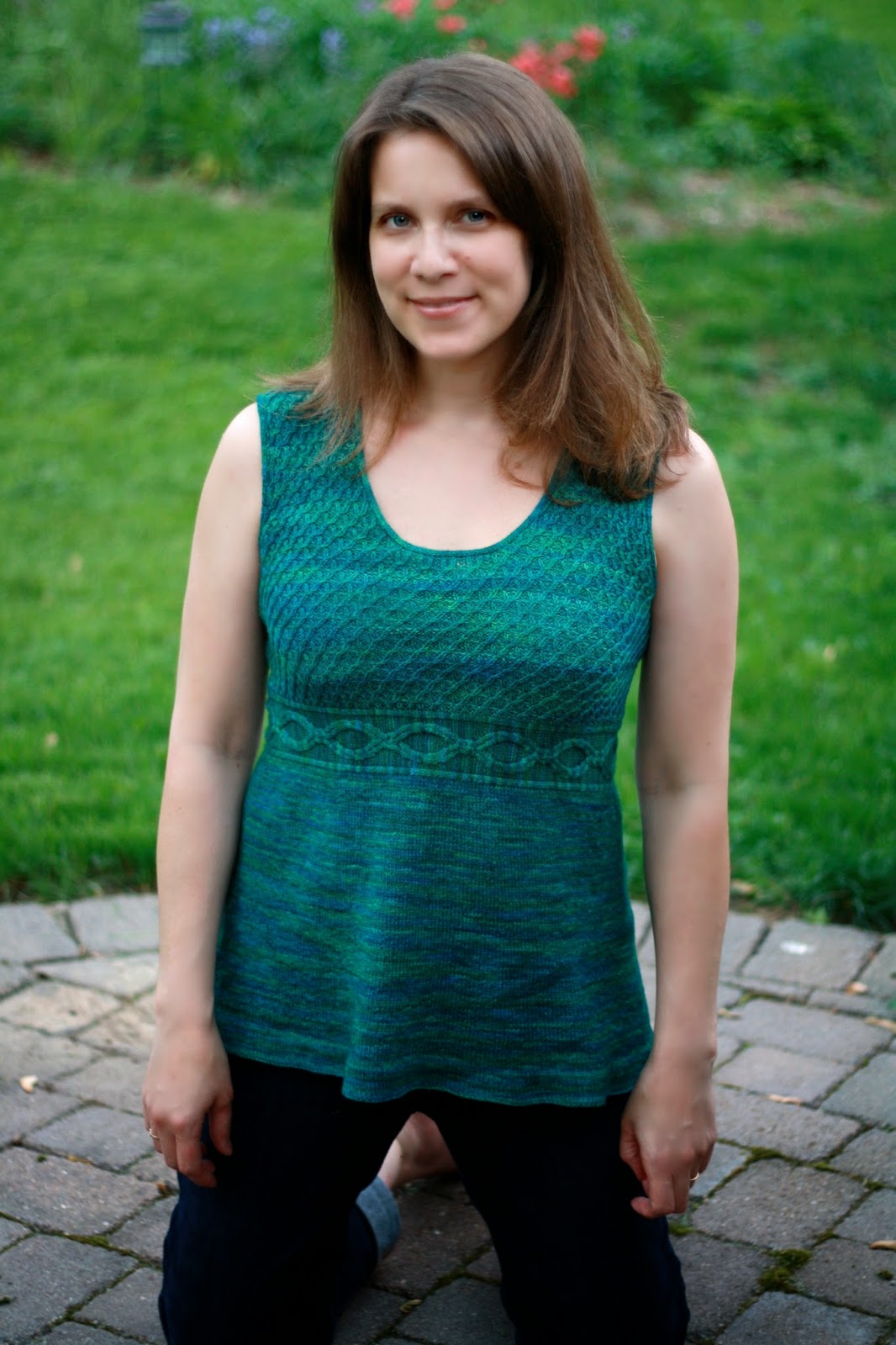 As I write this, the predicted high for today in Central Illinois is 48 degrees.  But we've had a couple nice days in the past few weeks, and I'm optimistic that warmer weather really is on its way.

Last spring, I started hearing chatter about my high school class planning a 20-year reunion.  At the 10-year-reunion, I was still an at-home mom/ private piano & voice teacher, so I knew I'd get some looks of confusion when people asked me what I was up to these days and I replied, "I write knitting patterns."  So I decided I'd design something unique and fun to wear to the reunion.

At the time I was working on this design, I still didn't know if the reunion was going to be a fancy dinner or a night at the carnival beer tent, so my goal was to come up with something that would look equally good paired with shorts or dressed up with dress pants and jewelry.  My favorite way to wear this top is over dark denim capris. 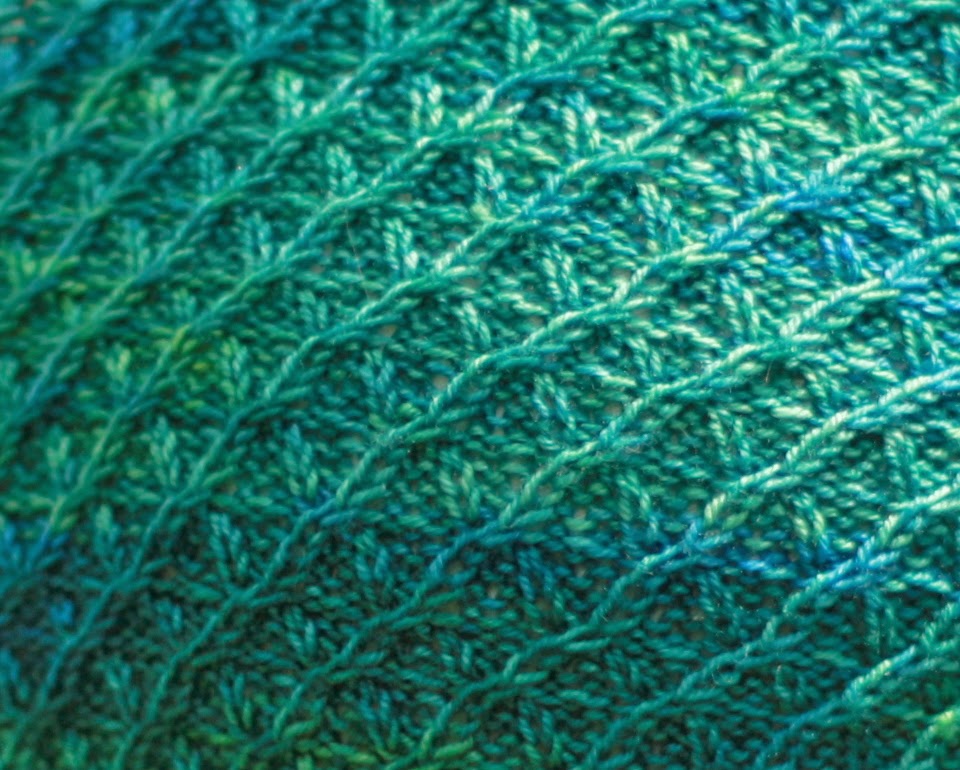 As it turned out, only 10 couples bought tickets for the dinner a couple of my classmates so generously planned, so the whole thing was cancelled due to lack of interest & funds.  But I am still pleased with the summer top that I now have and can wear to all sorts of warm-weather occasions!

You can find the pattern on Ravelry and in my Etsy shop.  Size/skill/materials needed information are listed in those two places.