I touch on my vicarious Rhinebeck experiences and the Knitting Pipeline Retreat that I'm looking forward to attending in February.  (KP Retreat info isn't posted yet on the day I'm publishing this blog post, but when it is released, you'll be able to find a thread about it on this message board.)

I show you the hat pattern that I released last week (the Stone Stacking Hat), and the one that will be released tomorrow (the Swirlygig Hat).  Both are available as single patterns, or as part of the #SquadHats eBook collection.

A little math lesson begins just after the 23 minute mark.  I talk about how I mathematically figured out exactly how many extra sleeve cap rows I could work without running short on yarn (and how you can do that, too!)  I also talk for a minute about how I fudged the neckline on my Cala Luna sweater, and how you shouldn't be afraid to do the same.

I show you a new project that I cast on for Mom's Christmas gift (which I'm not linking, just in case Mom is reading the show notes.  I posted the name on the screen as I was beginning to talk about the project, so you can just search it on Ravelry if you want to know more about the pattern.)

There's a little bit of enabling, as I show you 4 new recent purchases.

And I have a couple new podcast recommendations for you: Arne & Carlos and On Being with Krista Tippett.

I also talk about the Indie Design Gift-a-Long, which begins TOMORROW!  There is a 25% off sale that runs Nov 21 (8pm EST) to midnight (EST) on Nov 28.  Use the code "giftalong2017" on any sale bundle patterns from any of the participating designers...you can use the code as many times as you wish!  Then, hop on over to the KALs and join in on the camaraderie, games, and knitting support that will be available until December 31st.  Work on your holiday knitting, or knit a gift for yourself - it's always a lot of fun!

Oh my gosh, you guys....something amazing happened at my house recently.  Legendary, really. 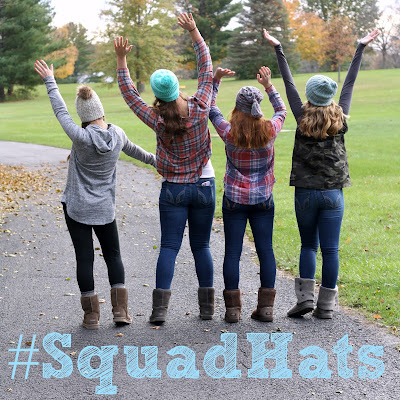 I designed and knit a hat for a new pattern, and laid it on a pile with a couple other hats.  A day or two later, my teenage daughter happened to notice the pile of hats, and she picked one of them up.  "Now THIS is something I'd actually wear," she told me.  SHE. WOULD. ACTUALLY. WEAR.  Did I mention that she is 14?  Did I mention that since the age of about 3 she has not been shy about letting me know that she's happy to be in charge of choosing her wardrobe because I "have no fashion"?

I did it to my own mom, too.  We would go clothes shopping together and she would helpfully pick things out of racks to show to me.  99% of the time, I'm sure my response was something like, "No," "No way," or "I'd never wear that if it was the only article of clothing left on earth.  Ok, I wouldn't have said that out loud, but I would have thought it, then tried to say "no" in a way that wouldn't result in me having privileges revoked.  When I was in high school, my mom was on a mission to get me to buy a blazer.  I wouldn't say that is the reason my favorite clothing style is loose and flowy, but knowing what I know of teenagers, she certainly didn't help her cause by consistently pointing out blazers and telling me how great I would look in one.

So imagine my surprise when my own 14-year-old complimented the hat I made, completely unprompted, and said it was very trendy and something she would actually wear.  It's not an occurrence I would count on to happen again....at least not until she's paying her own bills. 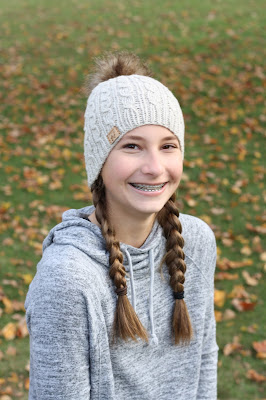 You probably guessed that the hat I'm talking about is this week's pattern release, number 2 in the #SquadHats eBook collection.  This one is called the Stone Stacking Hat, and it has an all-over faux-cabled texture.

It has a nice, rounded crown, so it looks great on its own, but it looks extra trendy with a pom pom, especially a faux fur one like the ones I currently have in my Etsy shop.  I started making my own, because the commercially produced pom poms I've come across have been both heavy and have had way more "center" than "fur".  I purposefully make my pom poms very lightweight, and I choose faux furs that have relatively long "hair" length, so the center of the pom pom isn't the main event.

The Stone Stacking Hat pattern is available now on Ravelry as a single pattern, but it's also available as part of a 4-hat pattern eBook called #SquadHats.  Two hat patterns will be available immediately if you purchase #SquadHats, and the remaining two will appear in your library over the next two weeks, until they are all released by the last week in November.  As a bonus to eBook customers, the first 50 people who purchase the eBook will have a Trappings & Trinkets ultrasuede garment tag sent to them in the mail.  (Tag will be sent to the mailing address associated with your Paypal account.)  You might receive a single-sided brown tag like the one shown on this hat, or a double-sided gray tag like the sample hat pictured on the At the Game Hat pattern page.  Make sure to send me a message on Ravelry right after making your eBook purchase if you have a preference about which tag I send. 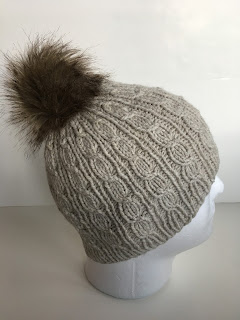 You can check the Stone Stacking Hat's Ravelry pattern page for specifics about yarn & needle requirements and the techniques this pattern uses.  There is an unusual increase included, so there is a detailed written explanation of the increase in the abbreviations section of the pattern & a link to a video tutorial demonstrating how the increase is done included as well.  Many, many thanks to sandyvar & mlb, the fantastic test knitters who helped to work the kinks out of this pattern!

Posted by Nicole at 6:05 AM No comments:


This week's podcast begins with my Top Ten List - Pieces of Craft Show Advice.  Things I wish I had done differently, and things that I'm glad that I did.  If you ever serve as a vendor at a craft fair, you will find a few valuable nuggets in the first 20 minutes of this week's podcast!

On to finished objects:

Easy Knit Boot Cuffs (Actually called Thermal Boot Cuffs...sorry, I got that name wrong in the podcast subtitles!)
Lace Boot Cuffs - I changed the crocheted ribbed cuff to a knit one for more stretch
Baby Goshalosh Boots
Saartje's Bootees - the pattern doesn't give specific instructions for making the button loop at the end of the strap, so here's what I did:  After binding off the last stitch along the top of the shoe, I cut the yarn to about an 8" tail and did not pull the tail all the way through the last stitch.  Instead, I inserted a small crochet hook into the last loop and chained 6 or 7 stitches (this depends on how large the buttons you are using are), and then I pulled the tail all the way through the last chain stitch.  I threaded the remaining tail onto a yarn needle and used it to sew the loop down to the strap, creating a sturdy button loop.

And on my needles is the Cala Luna Sweater

Last but definitely not least, this week's new pattern release is the At the Game hat! 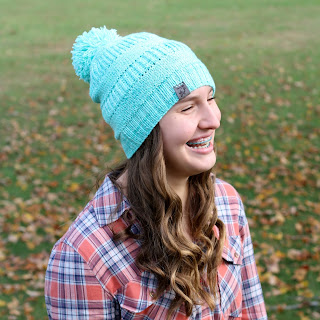 This pattern is available as a single pattern, and also as part of a 4-pattern eBook called #SquadHats.  The eBook only contains one pattern at the moment, but each of the next three weeks, and update will be sent to early purchasers of the eBook, adding one hat pattern a week until they are all published by the end of November.  And as a little bonus to early eBook customers, the first 50 people who purchase the eBook will receive a Trappings and Trinkets ultrasuede tag (similar to the one shown on the hat pictured) in the mail.  It will either be a double-sided gray tag (like the one pictured) or a single-sided brown tag.  If you have a preference of which you'd rather have, make sure to send me (colie75) a Ravelry pm as soon as you make your eBook purchase to let me know your preference.

Posted by Nicole at 6:44 AM No comments: