You can find quite a bit of info on my t-shirt sewing hacks in the two blog posts that precede this one.

New sewing patterns I discuss and show in this episode:

I know....doesn't look like I talk about much for a 50 minute podcast, but I swear, this is everything!


Here is the long, long list of links for Episode 33 of the Trappings and Trinkets Podcast!

Simplicity Pattern #8422
I used this paisley fabric from JoAnns
and a Sushi-print fabric that is very similar to this, but a darker gray color for the background, also from JoAnns

Here is the Kathryn Morgan video that is the most similar workout to what my gym class does, but she has all sorts of videos on her YouTube channel, and if you work through a bunch of them, you will definitely build your strength and your skills as you progress.

A couple links where you can buy ballet shoes.  Amazon and Discount Dance Supply

I can't track down online the shirt pattern that I talked about in the podcast.  I accidentally bought the pattern twice this spring, once at JoAnn Fabrics, and once at Walmart, so I think it probably is still available in stores.  I'm not sure why I can't find in online.  It is the "New Look" pattern line from Simplicity, and I see the pattern number listed as "S0184" and as "50184" on the packaging.

I can give you a link to the fabric I used though, over on fabric.com.

Here is a video that will walk you though how to make your own necklace.

Design Project in progress is made from Sweet Georgia Cashluxe Fine yarn.  I can't overstate how great this yarn is.  The ONLY negative is that if you have to frog & reknit it, it can start to look a little shabby from the friction.

WIP #2 is a pair of socks made from Brew City Lucky Charms Sock yarn in the "Spectacular Spectacular" color way.  Gorgeous, saturated, variegated color with flecks of gold sparkle.

Atul Gawande - I have personally really enjoyed the following books authored by him:
Being Mortal
The Checklist Manifesto
and Better: A Surgeon's Notes on Performance

The Resident (it's terrible, but it totally sucked me in.). You can find it on Hulu, and apparently it is also airing Monday nights on Fox.

Finally, get your laugh on with Hasan Minhaj: Homecoming King! 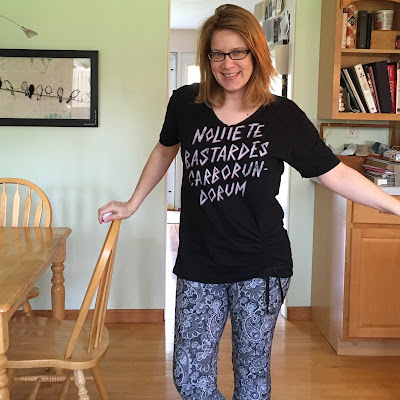 It's Me-Made May!  I am headed to ballet barre class this morning, so I am sporting an exercise-y Mostly Me-Made Outfit, which includes some fancy gray & white paisley leggings that I made yesterday (Simplicity Pattern #8422), plus a t-shirt that I definitely did not make, but hacked to have a much more flattering fit on me.

My main objection to this shirt was that it was just too long and shapeless.  I, of course, did not think to take a picture of it before I started my hacks, but it was a t-shirt with no shaping that was a fairly close fit (not a big, baggy thing), and the hem hit me right under my butt.  So it was kinda sausage-y, if you know what I mean.  It also had a fitted crew neckline, which is my fashion nemesis. 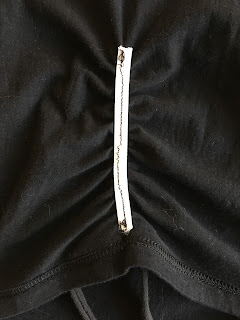 Step One of my plan was fixing the neckline.  I don't understand why fitted crew necks are the style du jour for t-shirts, because I hate them.  I tend to take scissors to them in order to create more of a scoop neck, and indeed I did that last year when I bought this shirt.  I've been wearing it with a raw cut edge ever since.  But recently, I cam across a great sewing tutorial that shows you how to finish off the edge of a knit piece.  The tutorial focuses on sleeves, but you can extrapolate and use the same idea to finish the edge of a neckline.  I used some lightweight black knit fabric that I picked up at JoAnns as my new neckband, but if your t-shirt is super long, you could hack a 1.5"- 2" wide strip off the bottom and use that instead.

Next, I cut a 1" strip of black knit fabric (This was the same fabric I used when I finished the neckline.)  I divided the width into thirds and folded one side over the other like so: 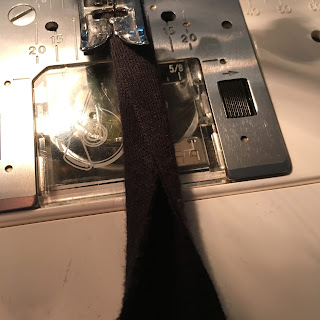 then I just sewed right down the edge.  There are probably fancier ways to do this, but it looked fine and I knew it probably wouldn't be a problem since the fabric was so dark. 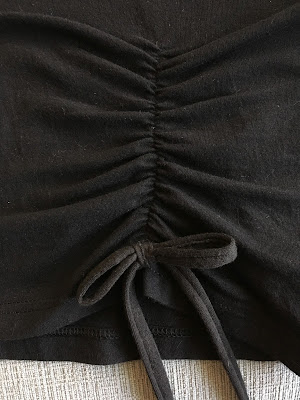 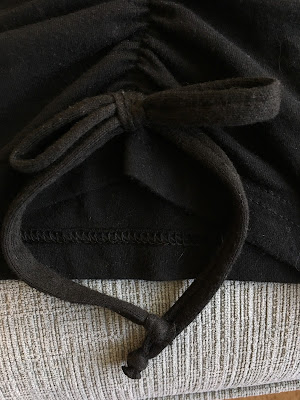 I tied it into a bow, knotted the ends and cut them off, then sewed the bow onto the bottom of the ruched seam. 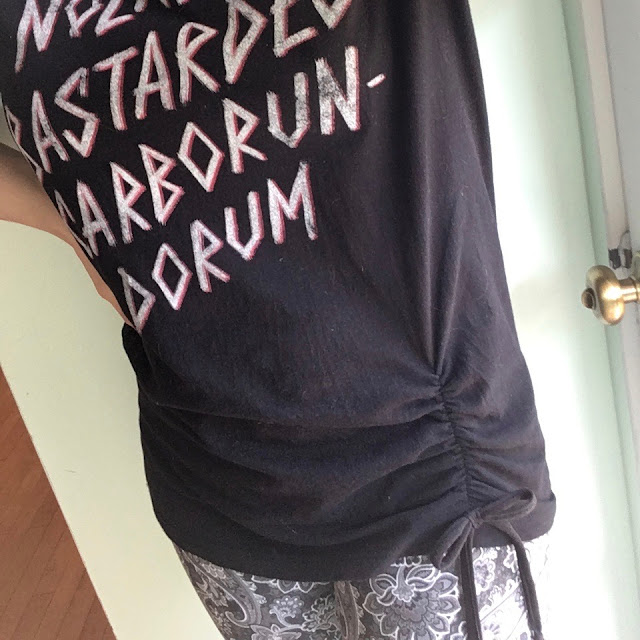 SaveSave
Posted by Nicole at 8:30 AM No comments: