Well, this morning was supposed to be dedicated to making a chart for a new pattern.  Unfortunately, I couldn't find one of the stitches I need in my chart-making program, and I'm stumped about how to create a new stitch to my collection.  Luckily, this chart-making program has a Ravelry support group, so I'm hanging out now, hoping someone will reply to the SOS message I posted there. 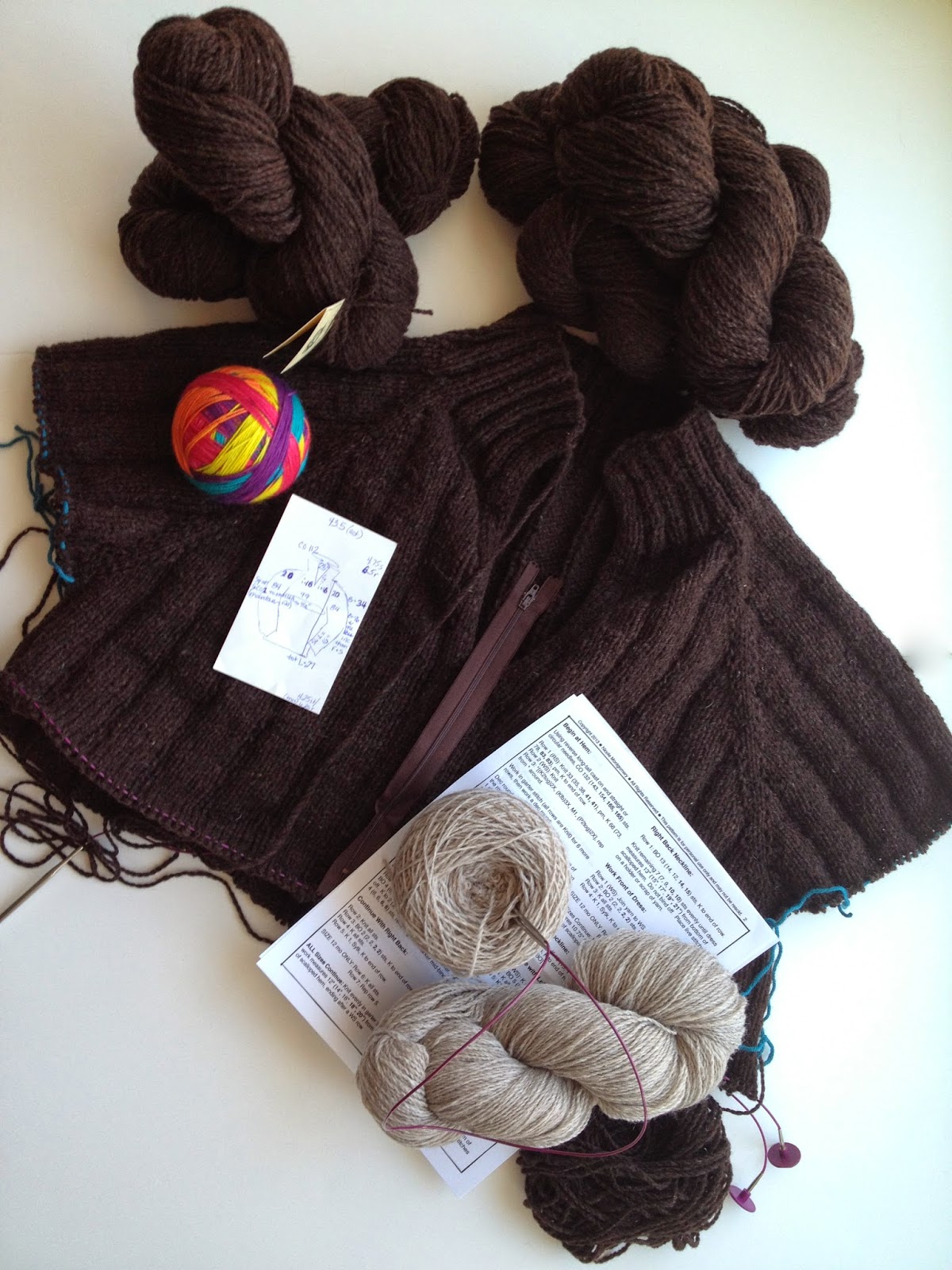 While I wait, I thought I could use this time to write a post about the projects I worked on during the Ravellenic games!  I know I put bits and pieces up on Facebook, but if you are exclusively a blog reader, you may not have seen what I knit over the Olympics.

This was my pile or yarn and patterns on the day of the opening ceremonies.  I started Jason's sweater a few days before the Olympics began, mostly because I was excited to get going on it, but also because I wanted to make sure I'd have enough time to get my socks and dress done, too.  So the sweater fell into the "works-in-progress" event.

I used Beaverslide Dry Goods Natural Heather worsted-weight yarn.    It was really nice yarn, and is left the natural color of the sheep it came from - there's no dye on this dark brown yarn.  It did have a nice heathered appearance, which broke up the monotony of knitting a full mile of brown yarn.  It was also VERY sheepy - I definitely felt the lanolin from the wool as I worked with it. 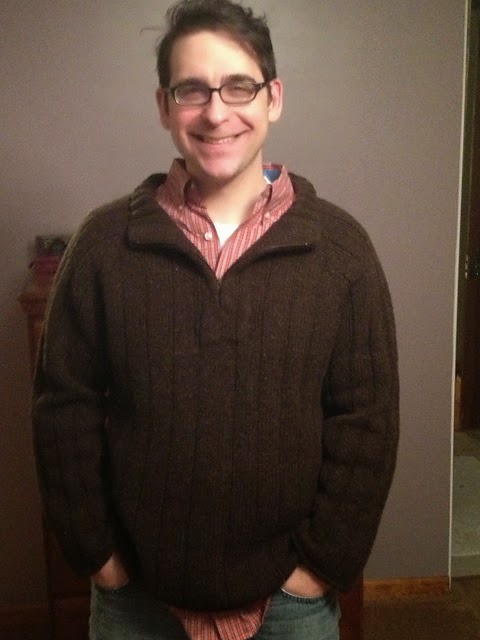 I couldn't recommend this yarn for anything that would be worn next to the skin, but for a sweater that will always have a shirt beneath, it was a great "workhorse"-type yarn.  Jason was quite please with his new sweater and has already asked about the possibility of procuring a second.  I told him I wasn't sure when I'd be able to bring myself to knit another mile's worth of plain yarn and asked him if he might consider a different color next time.  "How about gray?" he asked.

He's all about taking fashion chances, my guy. 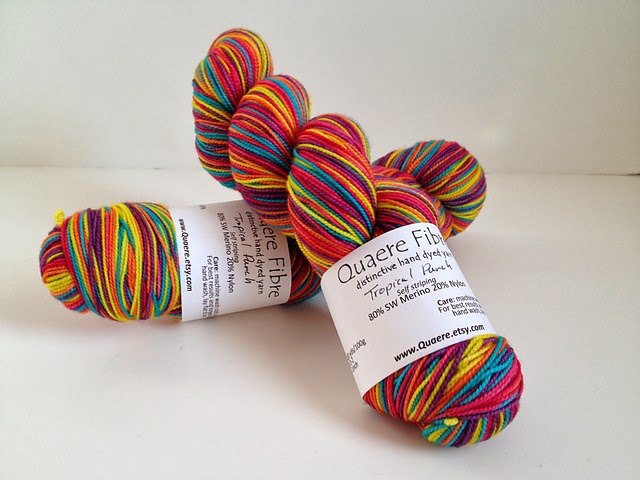 Knowing that I would need some "color breaks" while knitting these other two projects, I picked the brightest self-striping rainbow yarn I could find.  I always love knitting with colors, especially when they keep changing, but it was especially nice to work on this project for a while as a reward for knitting an hour's worth of brown or beige yarn on one of the other two projects! 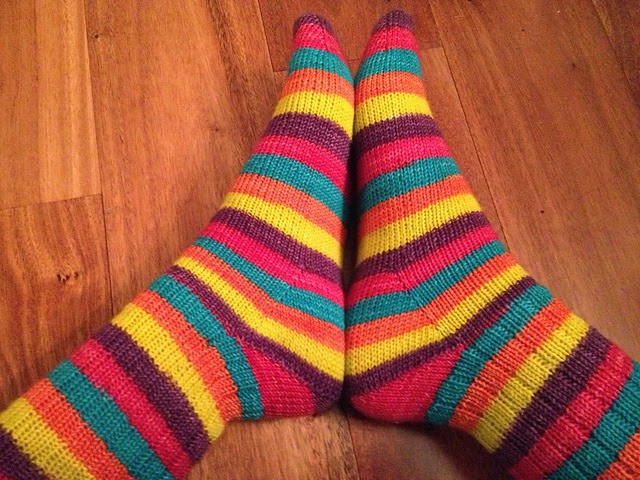 I heard about Quaere Fiber on the Fat Squirrel Speaks video podcast, and took a chance ordering from her Etsy shop.  I could not have been happier with the yarn.  It was beautiful, with bright, saturated colors, the yarn was tightly spun, just the way I like my sock yarn, and it was soft to the touch.  The resulting socks were soft and squishy, and very fun to wear!

I wasn't following any specific pattern for these - they're just plain vanilla, toe-up, with a fleegle heel.

My last Olympic knit was a sample dress for a pattern I'll be releasing in the fall.
Once again, the yarn is from Beaverslide (this time it's the 2-ply sport/sock weight), and as soon as I saw it on their website, I knew it would be a garter-stitch baby dress, and I knew what it would be called.  I wish I could show you a picture, but I'm going to have to wait until closer to the release for that. :)

While knitting it for the Olympics, I made the dress wildly too long, but I finished the project entirely, so it counted as done.  After the games were over, I ripped off the trim, took the zipper back out, unjoined the shoulders, frogged it down to the top of the skirt, and reknit the top once again.  This time it was the perfect size for a 2-year-old and I can't wait to do my photo shoot with my little model next week! It was such a fun 2 weeks.  Typically I don't have 3 projects on the needles simultaneously, and it was entertaining to go back and forth between the different projects, yarn weights, needle sizes, etc.  The real reward was in the finished projects, but my local yarn shop (the team I was knitting for) had a couple more prizes in store.  Each participant that finished at least one project was awarded a medal that I believe was handmade by another local knitter, Jolean.  In addition, the yarn shop did a random number drawing and awarded gift certificated for their shop to 3 people who posted their projects in the "finish line" thread.  I was lucky enough to have posted Jason's sweater in Post #22, which was the number chosen for the "silver medal" certificate!  Yay for more yarn!

This was my first official year as a Ravellenic Games participant, and I'm sure I'll do it again in the future.  I enjoyed planning my projects out, ordering just the right yarn, working the swatches leading up to the games, and challenging myself to finish more than usual in the time the Olympics are going on.  I found that I ended up watching the winter Olympics more that usual as well, and that was a lot of fun, too!

SO many things to knit! 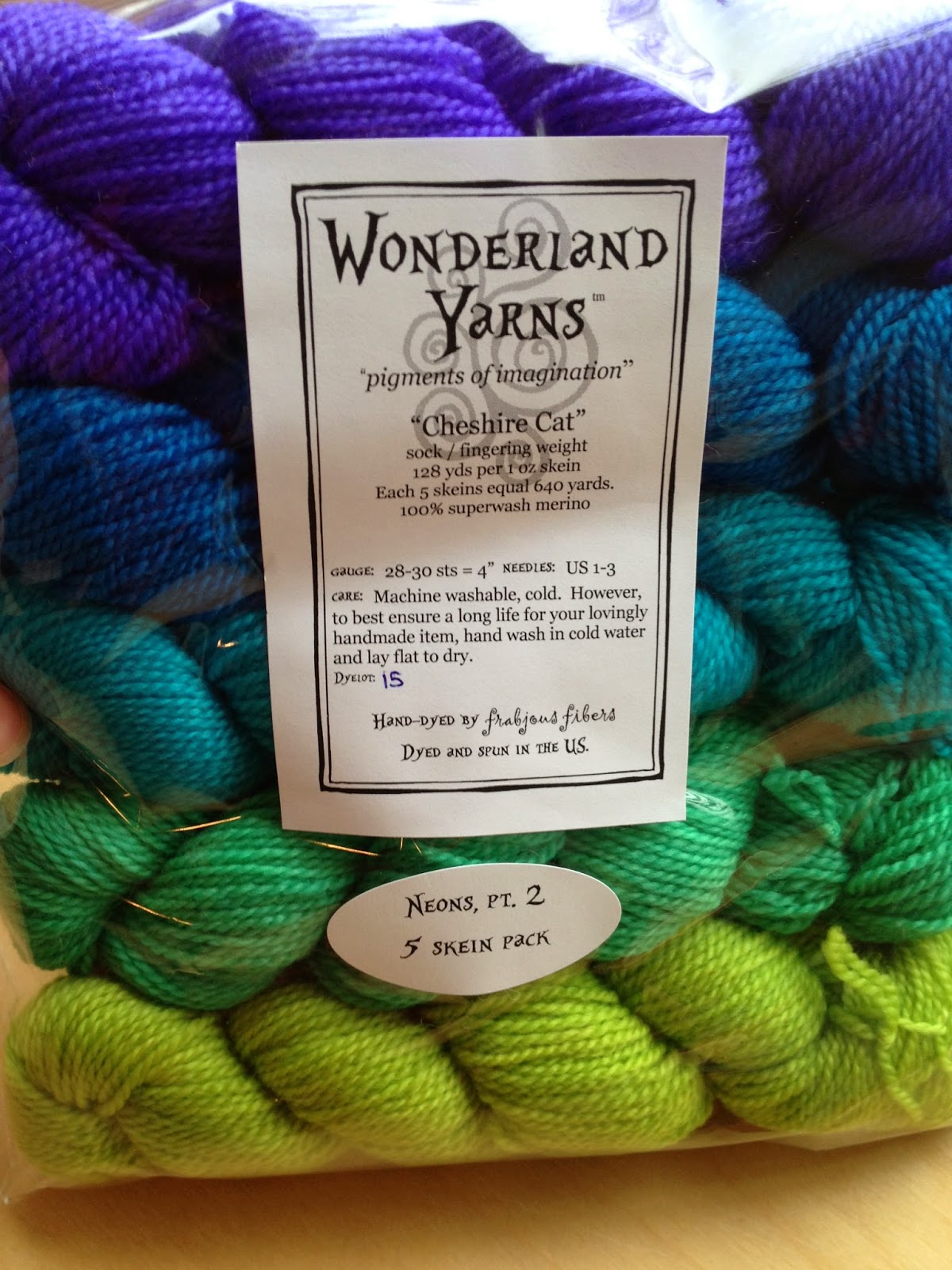 And still no time tonight.

Instead, I thought I'd show off a new product my local yarn shop is carrying.  I *think* it will become part of a color work sweater this fall.  Don't you love this rainbow?

This sweater is a long time coming.

The baby in the photos below is now well into her toddlerhood. 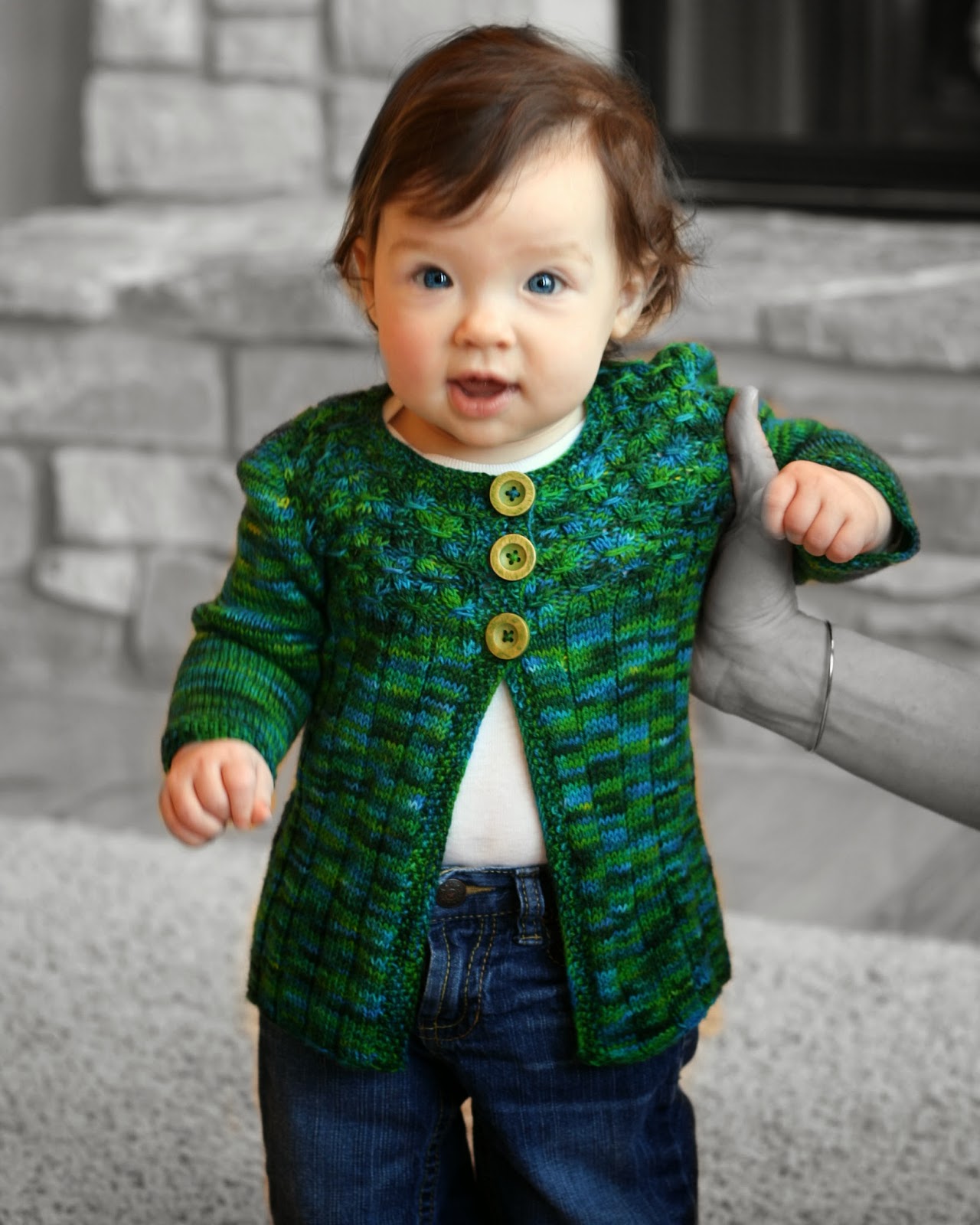 And isn't she the cutest? 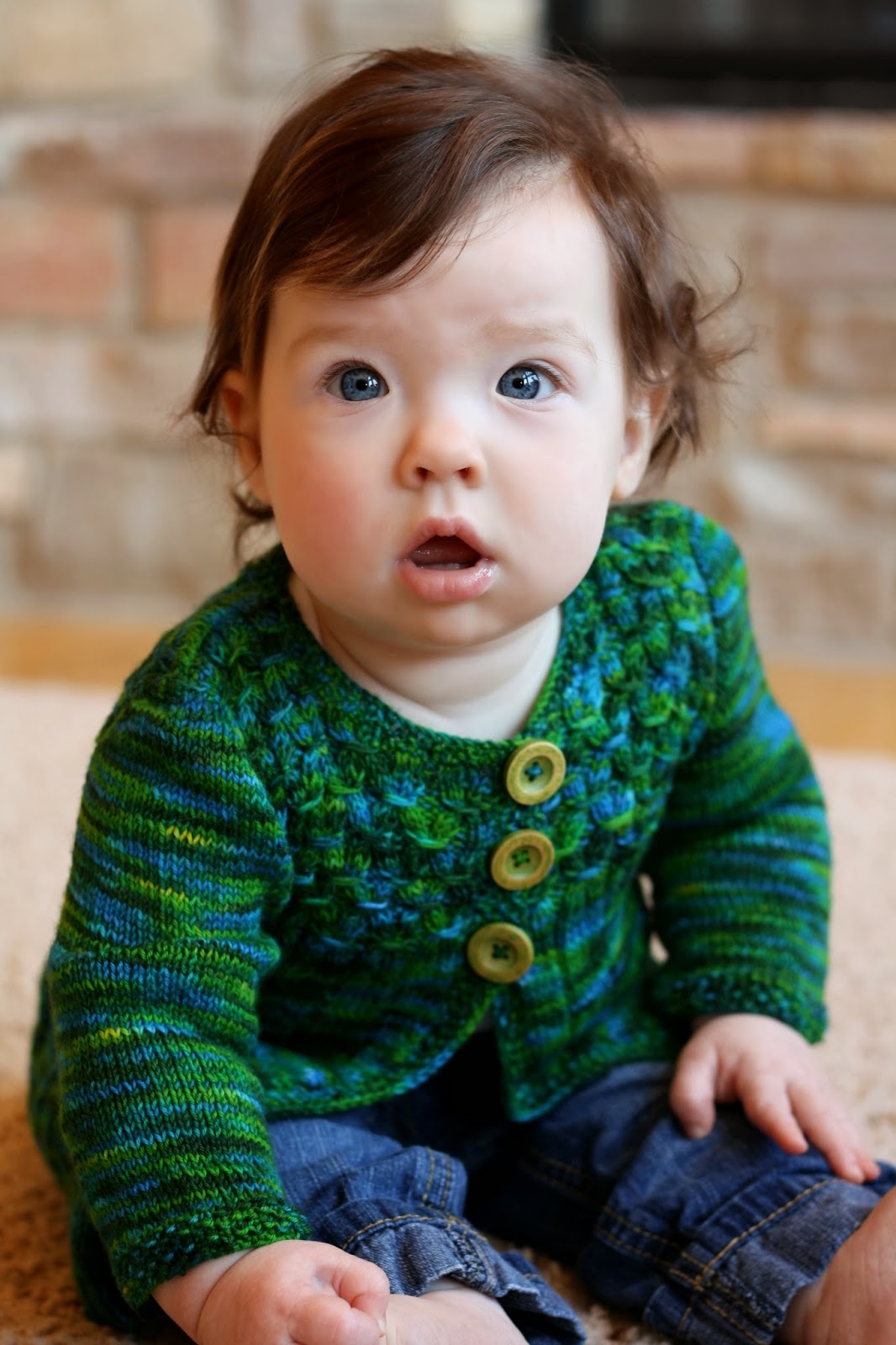 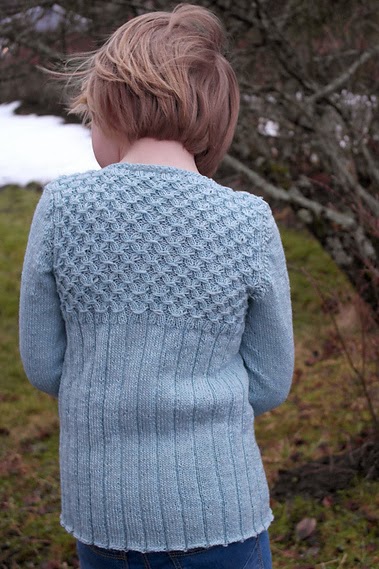 Sometimes I can't believe how lucky I get with test knitters.  I had a great crew on this test, and I would encourage you to check out the project pages they link to the main pattern page.  Maybe give them 24 hours or so to link up so you can see all of them.  One woman did a color-blocked version that was hit pink & gray, with striped sleeves.  So cute.

Another tester suggested I add a photo of the back of the sweater to the pattern, and I couldn't agree with her more.  The back of this sweater really shows off the smocking.  But I didn't have any great shots from the photo shoot I did with this adorable baby.  Luckily, Elin, tester extraordinaire, had already taken some beautiful shots of her test sweater, and generously allowed me to use them! 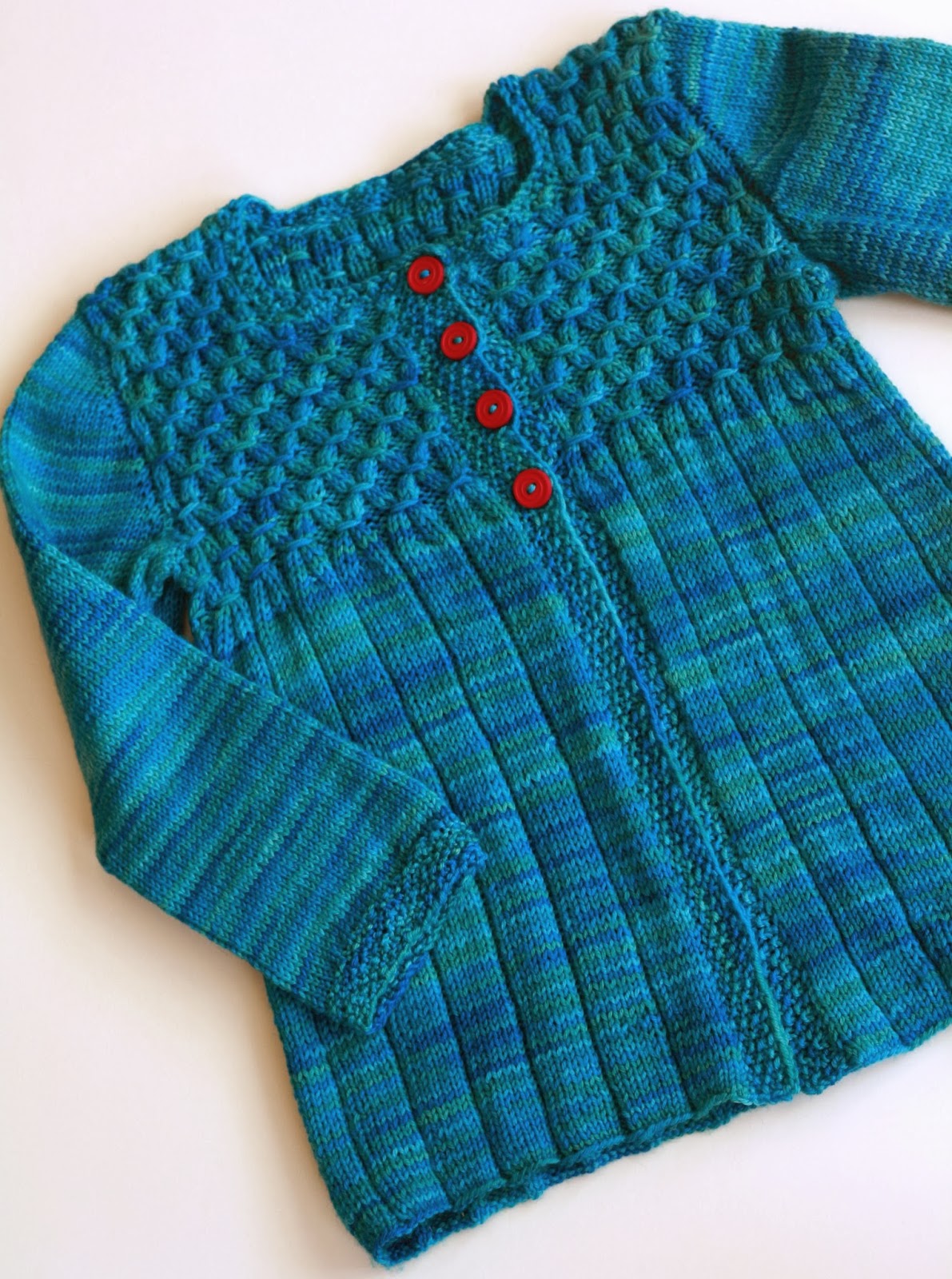 I wish I could recommend the yarn she chose, but it's discontinued.  The yarn I used for the baby sweater was Happy-Go-Lucky HGL Sock Yarn.  I later used Knit Picks Stroll Tonal for a second sample sweater (the bright blue one at left).  Another good alternative would be Claudia Handpaints Fingering yarn.  (This one just apparently underwent an image makeover.  It is now labeled as "Addiction", but I'm pretty sure it's the same sock yarn they've always sold.)   I would recommend something either solid or tonal to best show off the smocking stitch.  One tester did use a more variegated yarn and her sweater turned out quite nice, too, so sometimes you never know! 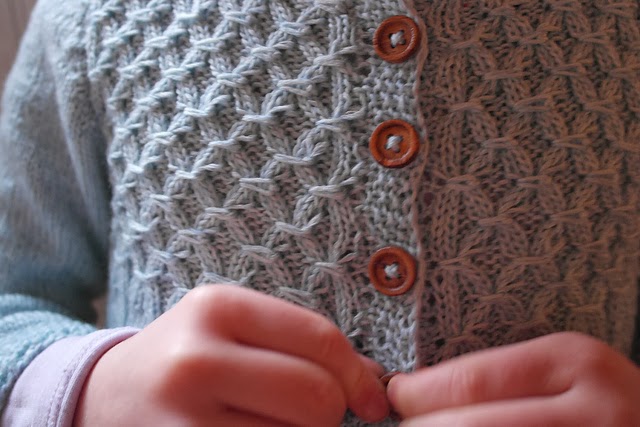 This light sweater will keep the chill away this spring, and it would look beautiful over an Easter dress.  There's still just over 6 weeks until Easter...plenty of time to knit this up for your special girl!

The pattern is the Galway Girl Cardigan.  It is written for sizes 3 mo up to girl's size 5.  Testers rated the difficulty between Adventurous Beginner and Intermediate.  Specific skills needed are listed on the Ravelry pattern page and on the listing page in my Etsy shop.