Are you having a good February?  Things have been going very well for me ever since the beginning of the year, right up to last Friday night.  I was so exhausted that I went to bed at 6:30 in the evening.  I shouldn't have been surprised when I woke up on Saturday morning with the plague.  I went in Monday for a strep culture and it was negative, so I've just been laying low, waiting for this virus to run its course. 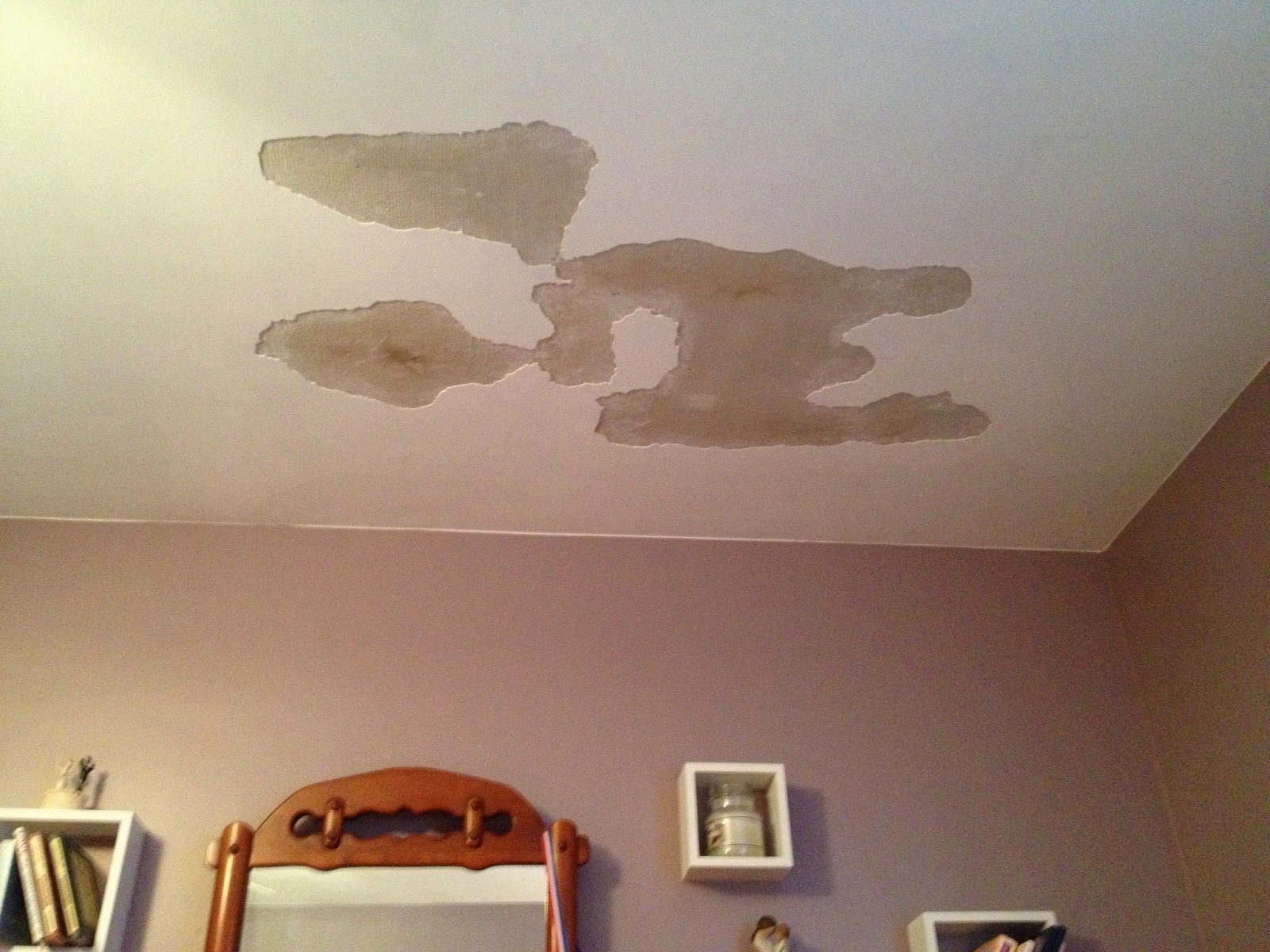 I'm working on a knitting project (of course!), but since I haven't gotten to the fun part of it yet, I thought I'd just post a little bit about what I've been up to over the past couple weeks.  That will be way more fun!

We got some damaged ceilings fixed, so that was exciting for us!  (And my pattern sales continue to help fund our home improvements, so I say "thank you!" if you contributed to this ceiling repair!)  Our house has plaster board walls - kind of a weird drywall/plaster hybrid.  It's plaster (trying to repair it with dry wall mud looks super bad), but it doesn't have the wood slats behind it, just a solid board (that's the drywall-esque part of this situation.)  From what I've learned from the guys at the local Ace Hardware, many post WW II homes in this area used plaster board, but then after the 50s, it wasn't really used anymore.  So, we're just lucky I guess.  Last year we had some roof troubles and by the time we replaced the roof, we had ceiling damage in 5 different rooms.  You can imagine how happy I am to finally have all these spots plastered over.  Now if I could just get the painting fairy to visit me.... 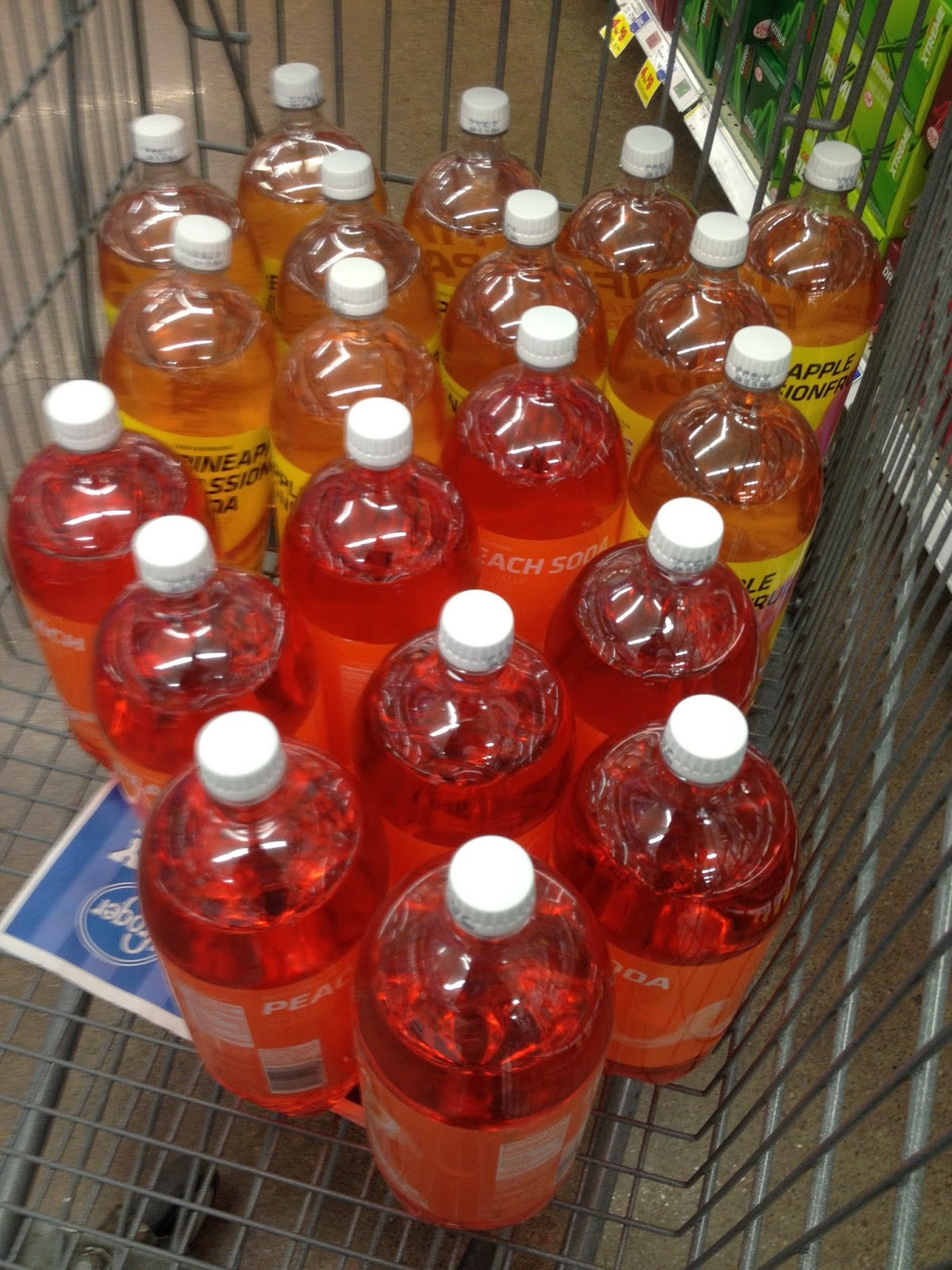 I bought a whole cart full of cheap soda.  I needed pop bottles to serve as the innards for a knitted ottoman that I constructed.  I had been playing around with different construction ideas and the best I came up with was a circle of wood, a plastic milk crate and towels/stuffing to fill out the sides.  It was fine - not fantastic, but ok.  I posted a picture of it on my Facebook business page and soon received a Pinterest message from Kelly, a fellow knitter who has shared wonderful ideas with me a number of times.    This is the link she sent.  Brilliant, right?  It was the lightweight construction I was looking for (although I decided to keep the disk of wood instead of using cardboard like in the link), but with all those bottles supporting the weight, I knew it would still be sturdy.  And the thing that made it superior to my wood & milk crate idea was that the inside structure was already curved and wouldn't have any droopy stuffing or towels crammed in there to fill out the sides.  (That was what made my first attempt just "fine", it was difficult to fill out the sides without them being lumpy.)

When I visited the grocery store, my plan was to buy the cheapest bottled beverage I could find.  We don't buy 2-liters at our house unless we're having a party, so I knew whatever I bought was just going down the drain.  Big K soda (the generic Kroger brand) was on sale 4/$3, so it cost me $15 to buy the 20 bottles I needed.  It was SuperBowl weekend when I bought the pop, so I didn't want to be a jerk and buy the flavor I thought people might actually want to buy.  So I looked for the grossest flavor I could find and bought every bottle.  Pineapple Passion Fruit fit the bill.  And since they didn't have quite enough of that flavor on hand, I also dipped into the Peach soda.  I'm sure the store inventory had a moment of confusion when he realized both of those nasty flavors had flown off the shelf that day! 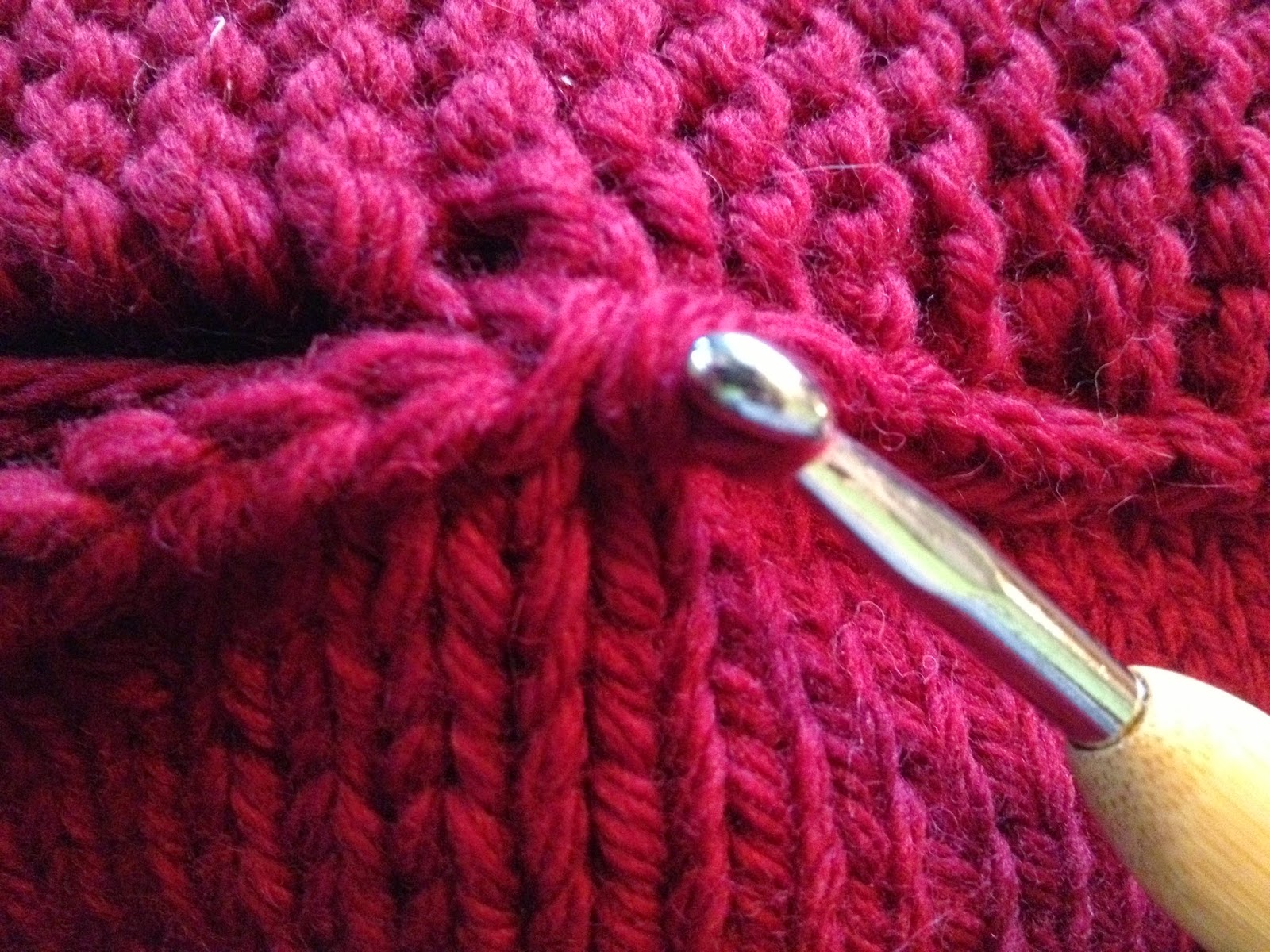 Speaking of this knit ottoman, get ready to use your crochet hook.   It's the method I decided on to seam this puppy, and let me tell you - it is far faster & easier than any knitted join I could have done.  The ottoman is about 75" in circumference and it took me about an hour to work a slip stitch chain around the top edge, and another hour for the seam around the bottom edge.  Super easy, and it leaves a nice looking seam! 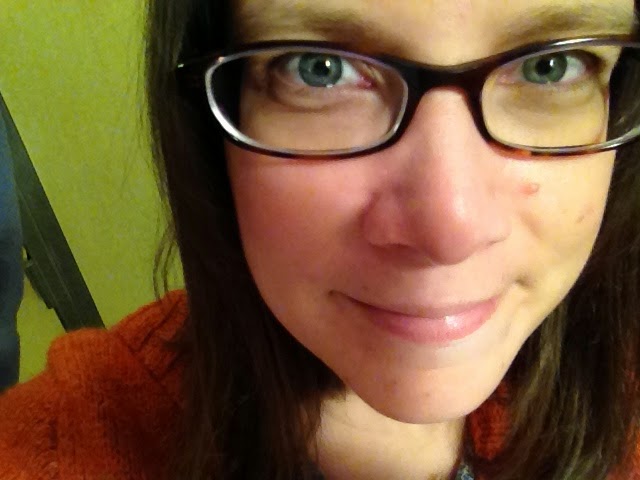 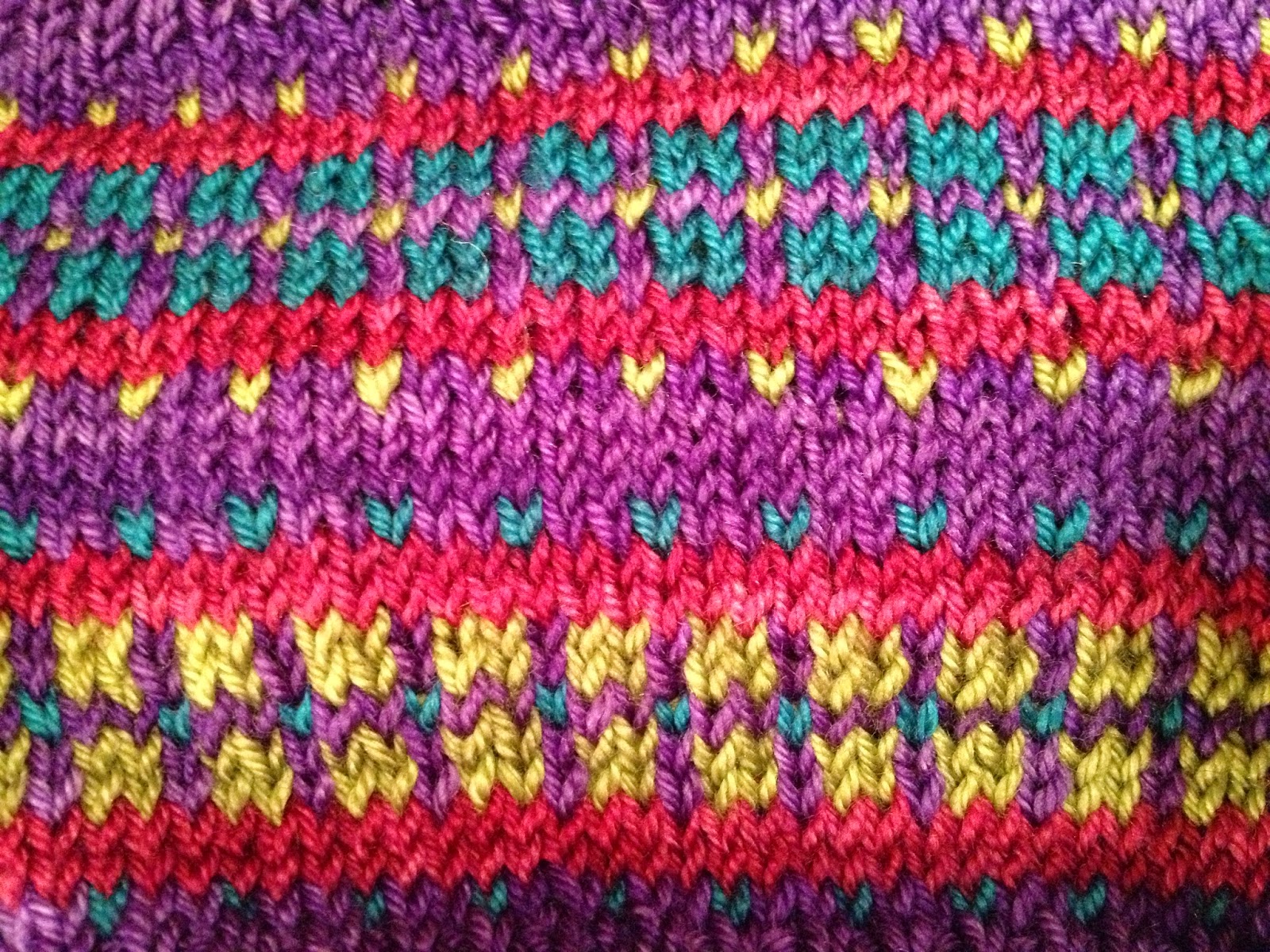 What else.....?  I got new glasses.  I've had my old frames for about 8 years now.  I've been trying to replace them for the past couple years, but the trend was either rectangular frames or enormous Zooey Deschenel frames, which just remind me of being an awkward 12-year-old.  So apparently 8 years is the length of time it takes for glasses frame shapes to come back in style, because when I looked at the new collection of frames after the first of the year, there were a lot of oval-y choices.     So now I have these new brown frames.  And, because I apparently have a weird emotional attachment to my black oval frames, I got the lenses replaced in those, too.


On the knitting front, I've been playing with color.  My LYS has started carrying yarns from Wonderland Yarns.  They do these lovely color packs, and I found one I absolutely loved.  The colors in this photo are a little washed-out...in real life they're much more jewel-toned.

Anyhoo....this colorwork will be incorporated into the project I'm working on now, so stay tuned for new developments!

My February pattern, a cowl called "Crush on You" has just been released, which means it's time to give away The Gleener!

Check out the video below for a demonstration on how to use this fantastic tool, a little Q & A about it, and the drawing for the winner!

Thanks so much to all who entered and to everyone who reads my blog and supports my pattern business.  And congratulations to the winner....I don't want to spoil the surprise by putting the winner's name here, I'll let her be surprised when she hears her name on the video!  :)

Posted by Nicole at 9:12 AM No comments: 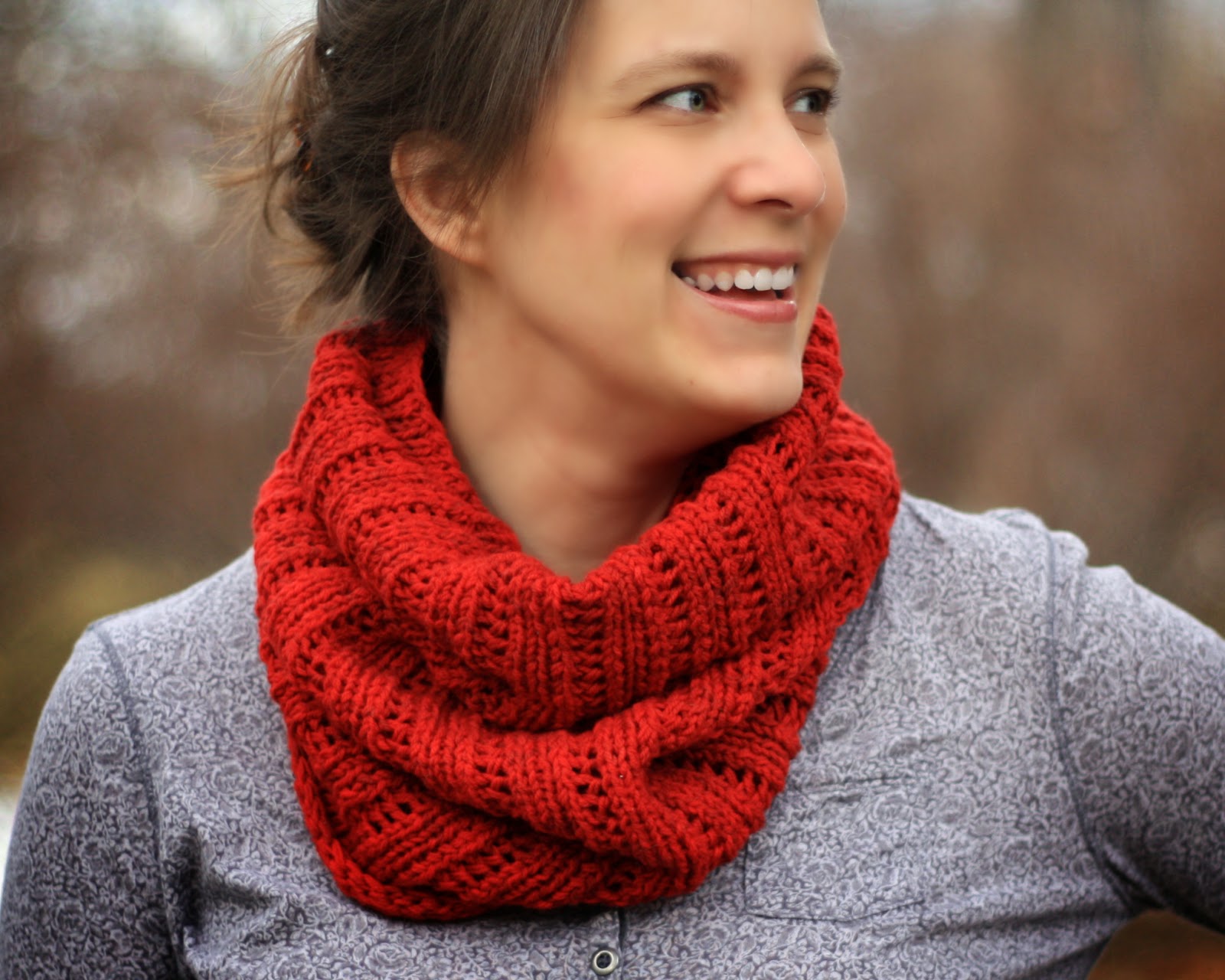 Just before Christmas, I was looking through my closet thinking, "I don't really have anything "Christmas-y" to wear to church on Christmas Eve.  But I do not want to go shopping."

What's a knitter to do?  Pick up some red yarn and come up with an accessory that can instantly turn any outfit into a Christmas outfit!

Now that it's two months later and the pattern is test knit and ready to publish, I realize that this cowl is just as appropriate for February, the month of Valentine's Day and celebrating love.  In honor of that, we're calling this cowl "Crush On You"! 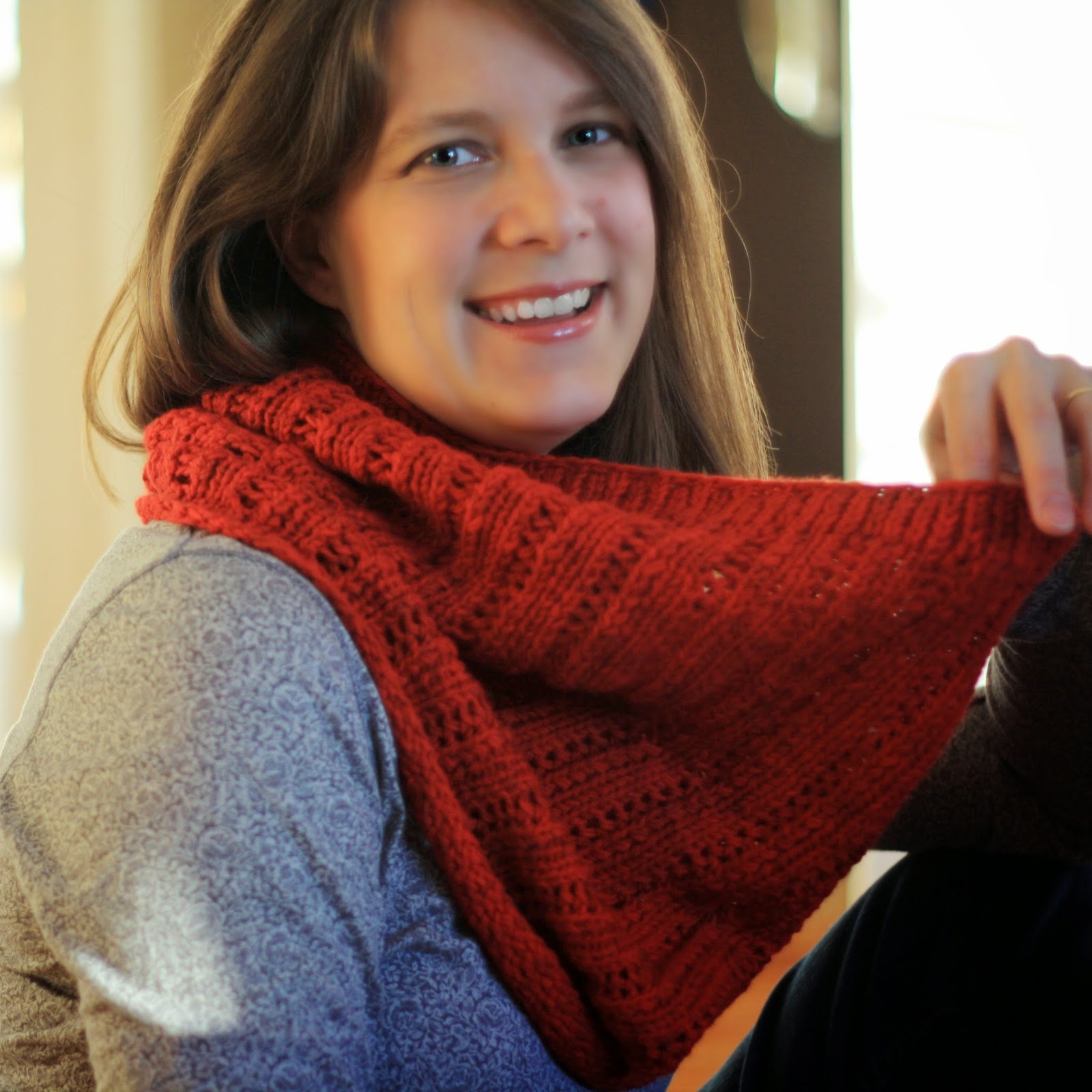 The pattern is written for the smaller size (Top picture.)  The larger size (middle picture) was my first draft, and while it was perfectly lovely - and the cowl that I sported to all my Christmas gatherings - it just wasn't the size I had intended for this project.  If you prefer it though, the only think that needs to change is the cast-on number (and you'll need about 150 more yards of yarn).  Find details on my project page here.

This cowl pattern looks lovely when paired with a solid, semi-solid, or tonal yarn.  The stitch pattern is small enough to be memorized, but has enough going on to keep things interesting.  The border stitches are made more plush by using "knit one in the row below" stitches.  A demonstration video is linked in the pattern for anyone who is not familiar with this easy-to-learn technique.

The groundhog just saw his shadow, which means there's at least 6 more weeks of winter....so start this quick-knit now and enjoy a new pop of color in your winter wardrobe!  Click this link if you'd like to purchase this pattern through the Ravelry website. 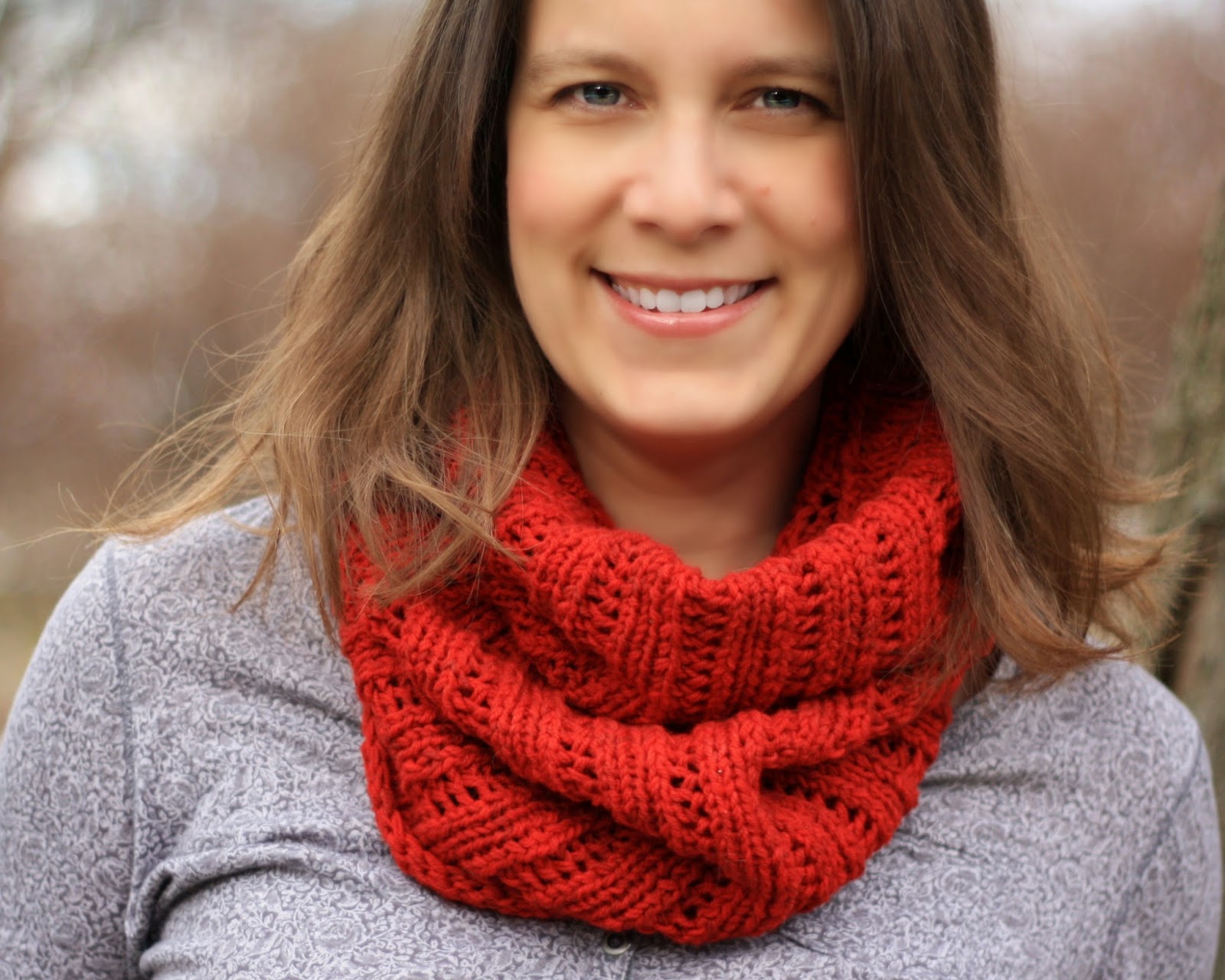 Thanks to all who entered my "Gleener Giveaway"!  If you would like to hear the answers to the questions asked in the comments thread, see a little live demonstration, or find out who the Gleener winner is, stay tuned to the blog!  This morning I am busy running my kids to school and going to the gym, but I hope to get a short video made after I get back and it should be uploaded to the blog by later this afternoon!