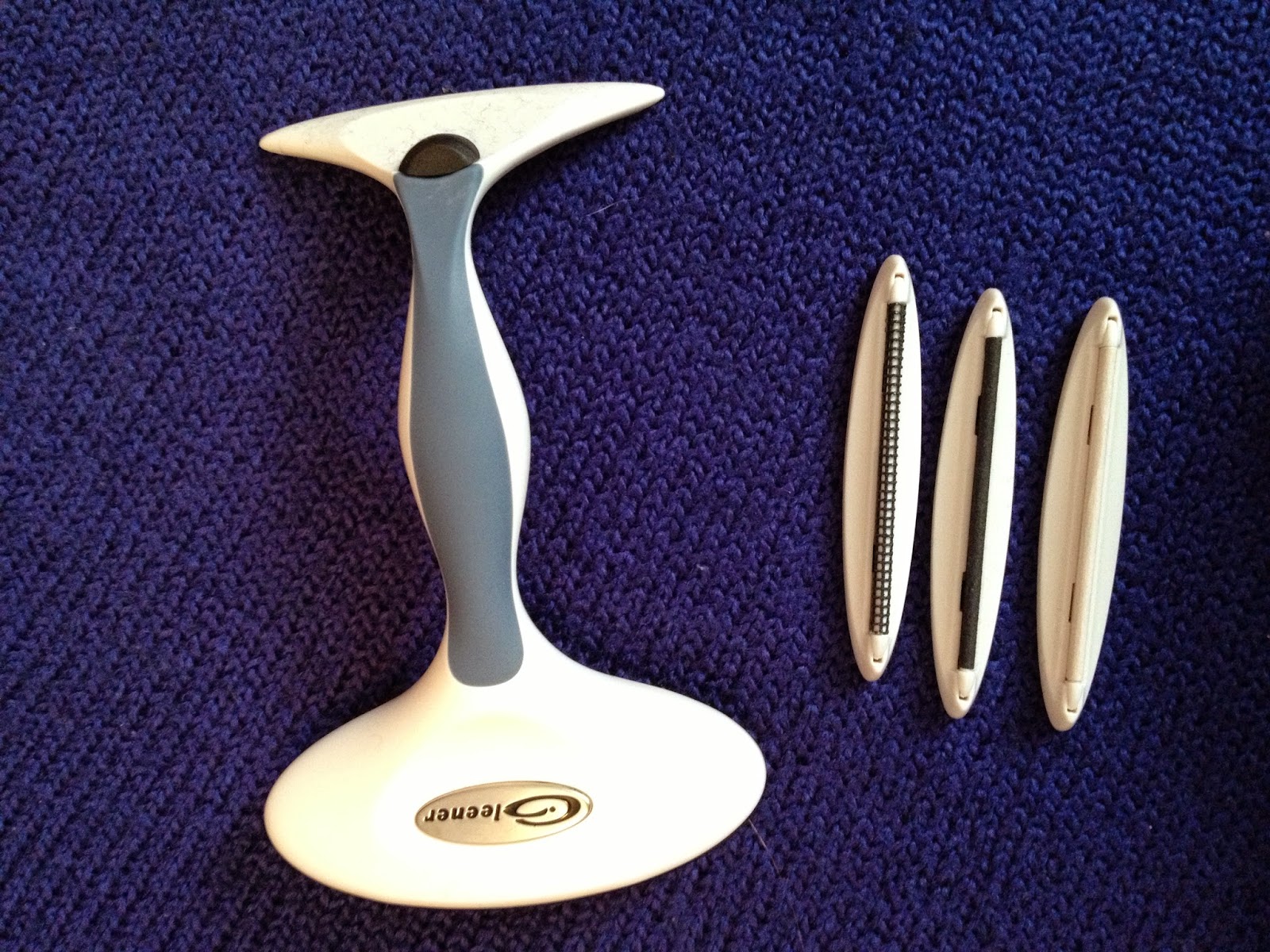 I know I've posted about this contraption before, and I swear I have no association with the company that makes this thing!

But if someone asked me to list my Top Five Tools for Knitters, this would FOR SURE be included.

Because really, if you're going to spend a wad of cash on yarn, then invest a whole bunch of your time making something, don't you want to be able to keep that thing looking nice as long as possible?

Last winter I took before and after pictures while I was de-fuzzing one of my sweaters.  NIGHT AND DAY, people! 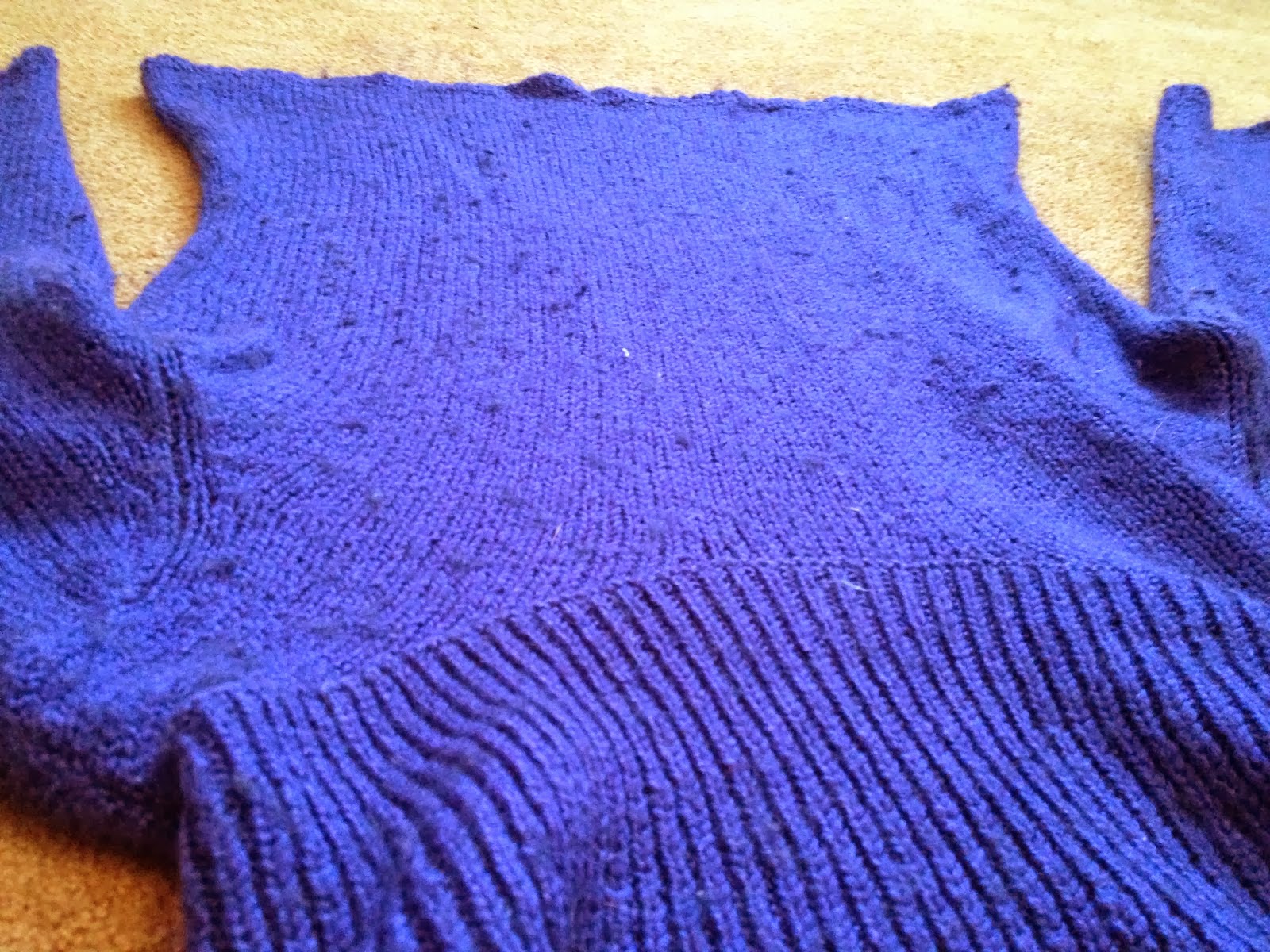 <--- Yuck - nobody wants to wear a sweater covered with pills like this one! 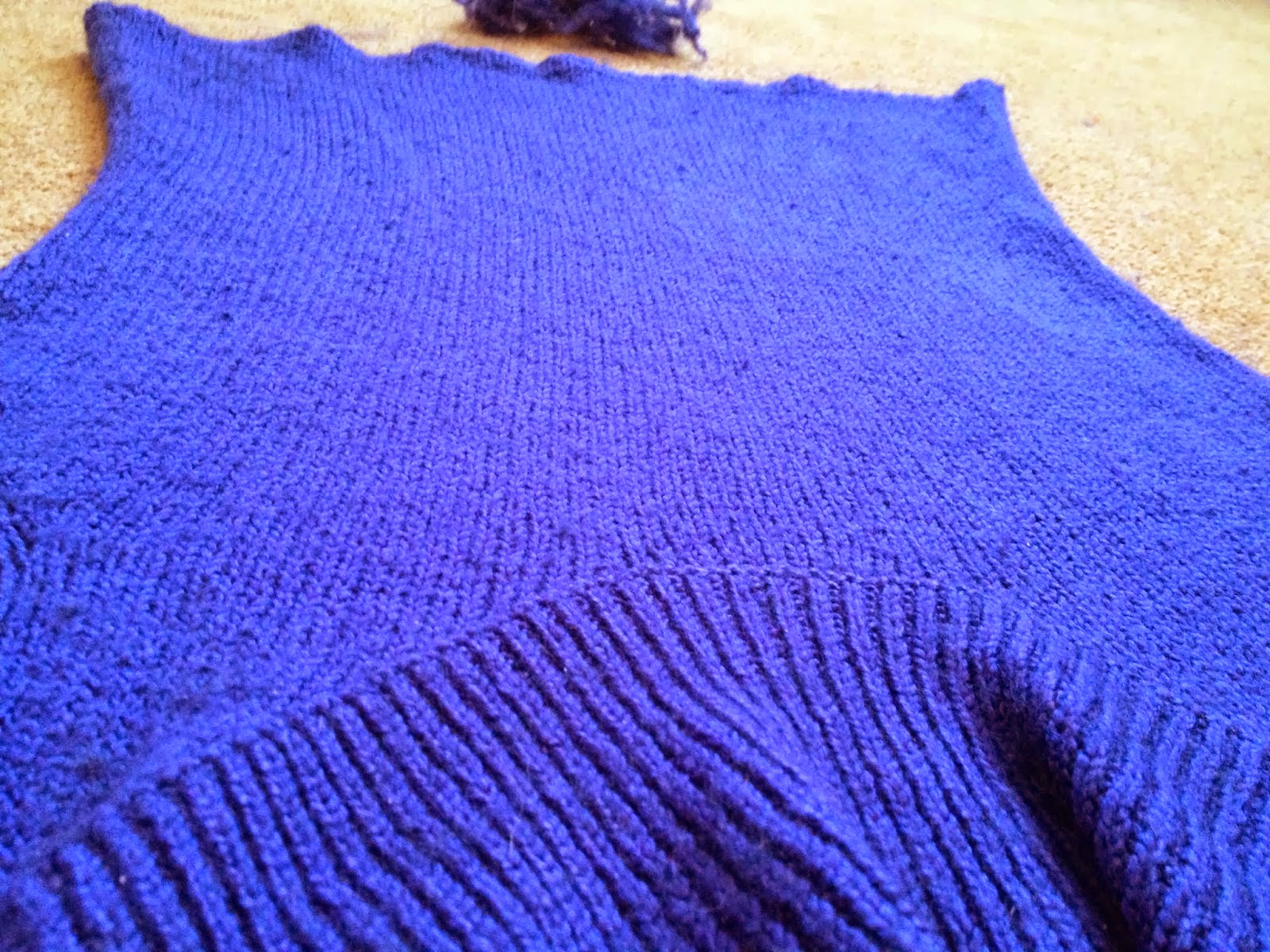 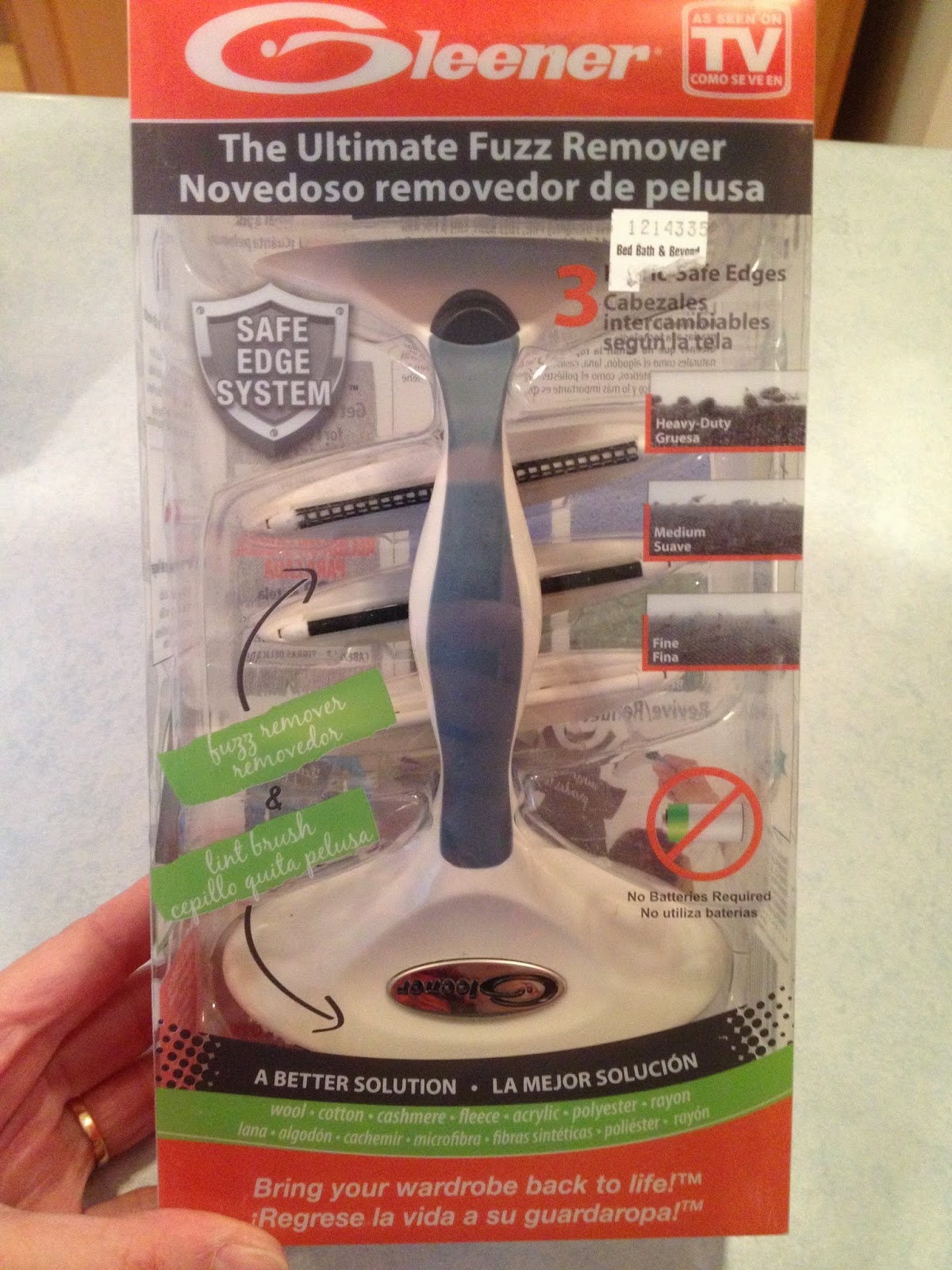 The Gleener kind of feels like a big razor.  You hold the middle of the handle and just drag it across the surface of your fabric, holding the fabric taut so the pills slough off easily.  The Gleener comes with 3 different detachable heads and the instructions (and some experimentation) will tell you which head works best for each type of fabric.  It's VERY easy to use, and it gives results that are far, far better than any of the other "sweater shaver"-type products I've tried in the past.


Now that I'm a few months into sweater season, I've had to get my Gleener out to shave a few of my more-often-worn sweaters.  And it occurred to me - maybe one of my blog readers needs of of these things!  So I stopped by Bed, Bath & Beyond and picked one up this morning.  Leave a comment below to enter your name in the drawing!  Make sure to put your e-mail address in the comment form so I can contact you if you're a winner.  Your e-mail address won't display, but it will allow me to click on your name and send you a congratulatory note if your name gets drawn!

I'll be promoting this giveaway on my Facebook business page, too, so you can enter your name more than once if you click over to that page, "Like" my business page, and "Share" the Gleener Giveaway post! (posted Jan 21 if you have to scroll through a few things to find it.)

I want to leave this post up for a couple weeks to give people a chance to enter, so I'll do the drawing on the day I release my February knitting pattern, which will likely be on Feb 3rd or 4th. 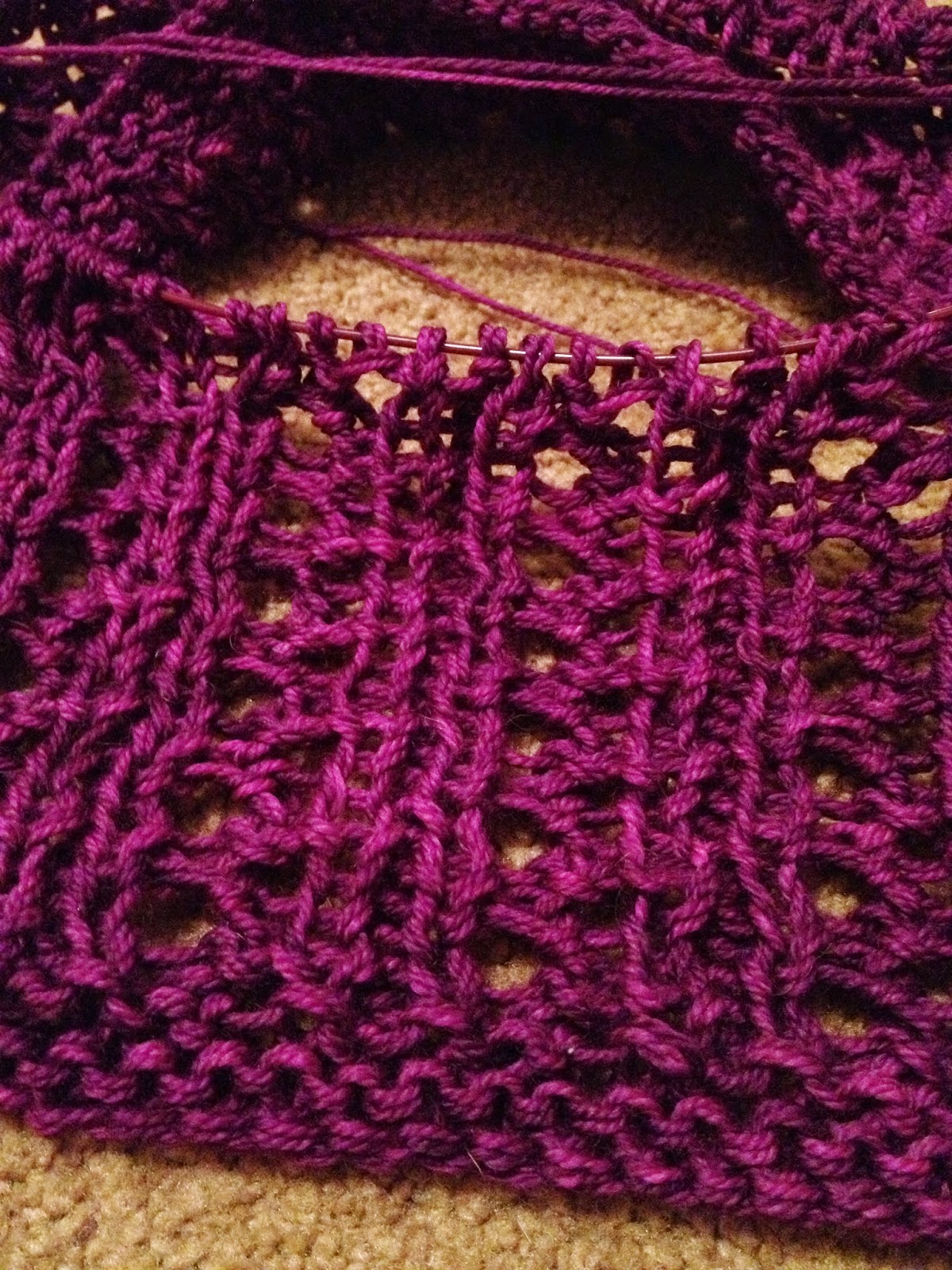 Every year, my mom, sister & I do a homemade gift exchange.  Everyone else in the family is welcome to participate, too, but so far they've decided they don't know how to make anything.  Ahem.  Anyway, whoever I'm gifting always knows they'll be getting a knitted gift from me....there's no surprise there.  This year I was a little up-in-the-air about what I would make for my sister.  Nothing was really jumping out at me, and since we live 4 hours apart, I don't see how she dresses day-to-day, so I didn't really have any great ideas about what to make.  I decided that rather than surprise her with something I've spend a lot of time on, and a lot of money on the yarn to make, only to have her not really love it, I'd ask her for some suggestion of what she might like.  I sent her a link to the Pinterest boards that were made up for the Indie Gift-a-long, since I wanted to participate in a couple of the KALs for that, and asked if she saw anything she liked.

She sent me back links to 3 or 4 patterns and the just-vauge-enough suggestion "I like jewel tones".  I had plenty to run with, and she still didn't know exactly what she would be getting. 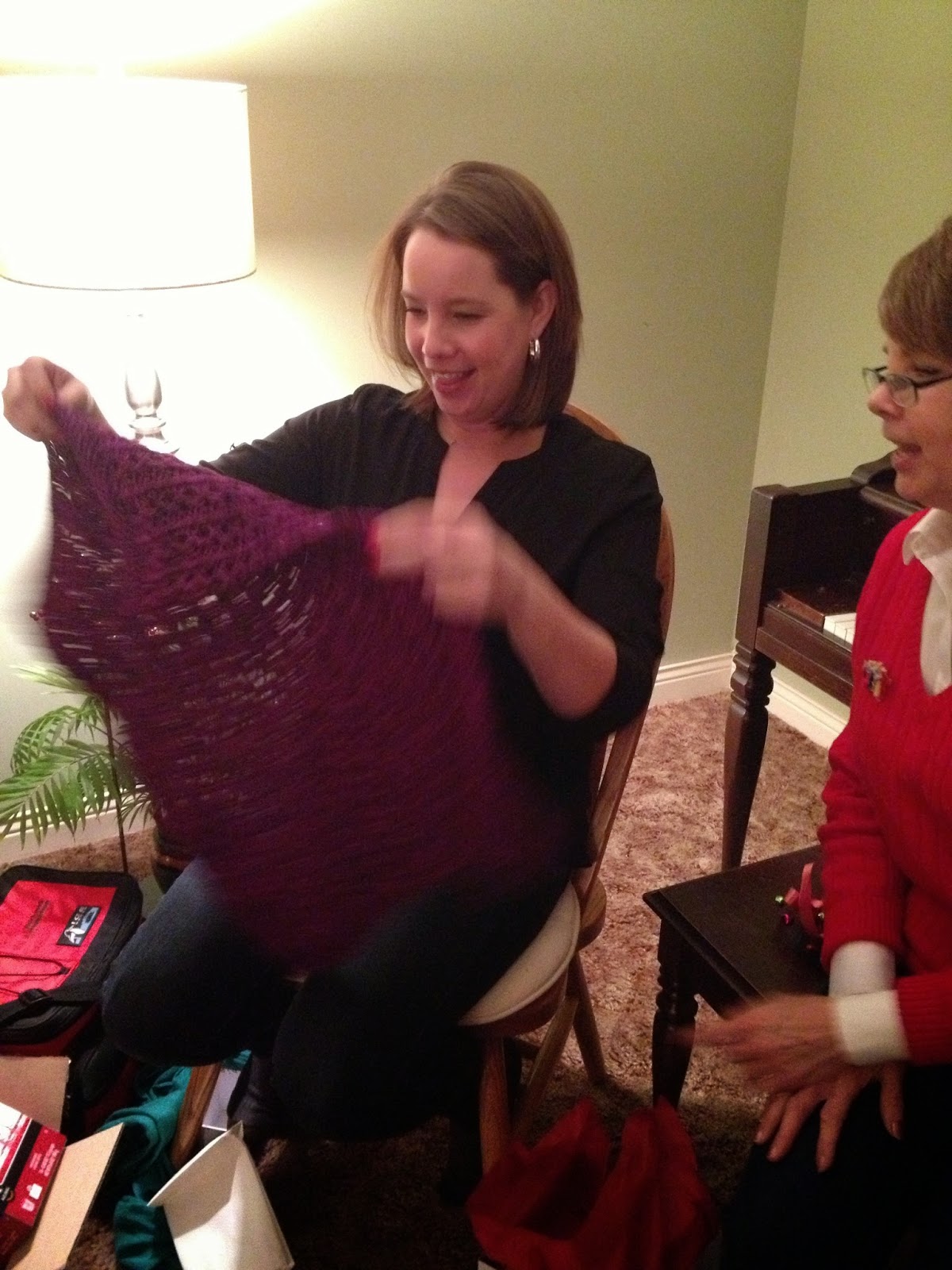 I was off to The Fiber Universe, my LYS, in a flash.  I love the Three Irish Girls Adorn Sock Yarn that they carry, and they had two jewel tones in stock: purple and emerald green.  I'm kind of a sucker for purple, and I thought I had seem my sister wear other things that were this color, so that's the one I picked.  The cowl I settled on took almost 2 skeins of the sock yarn.  It's a nice floppy, cozy cowl!

Here's my sister opening it....she thinks she likes it, but hasn't quite figured out how it works.  This cowl is shaped differently from your typical "far wider than it is tall" cowl shape.  This one has about a 32" circumference, so when it's folded flat, it's about 16" across and something like 24" tall.  That makes for a nice squishy cowl that piles up on itself all around your neck.  To add to the squishiness, I used the sock yarn held double rather than using the dk-weight yarn called for in the pattern.  My gauge didn't match, but it's easy enough to modify the cast-on number so I'd still get a 32" circumference. 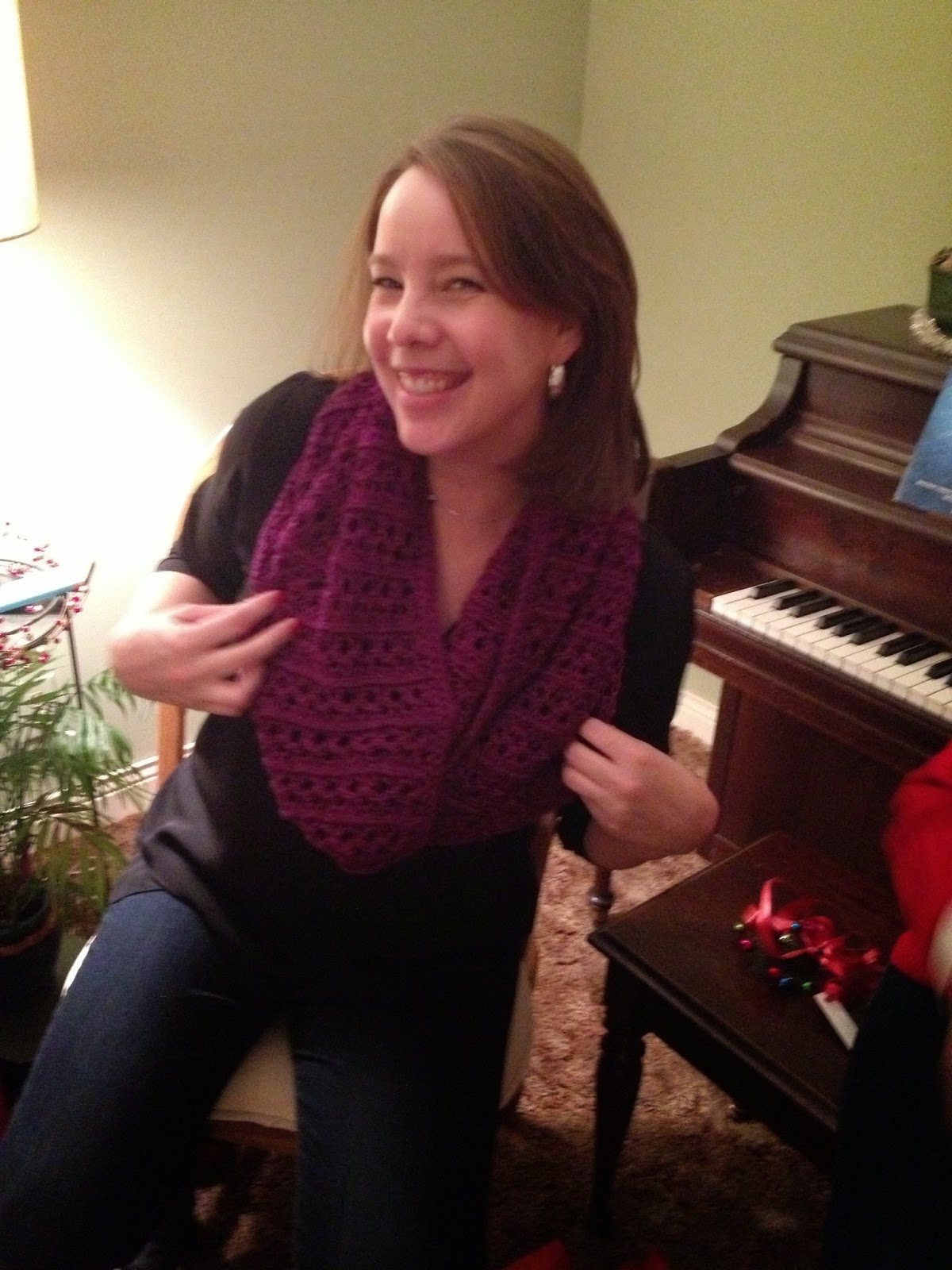 Here, she's figured it out and is modeling it for me.  Since this pic is a little on the dark side, I posted the pic I took of the cowl on myself the minute I finished it.  It's not blocked yet since we were in the car on the way to Thanksgiving dinner, but you can see the stitch pattern a lot more clearly.

Anyway, I liked the cowl shape and my fingering-weight-held-double-mod so much that I based a new cowl pattern on those two things.  The pattern is currently in testing and will publish in early February! 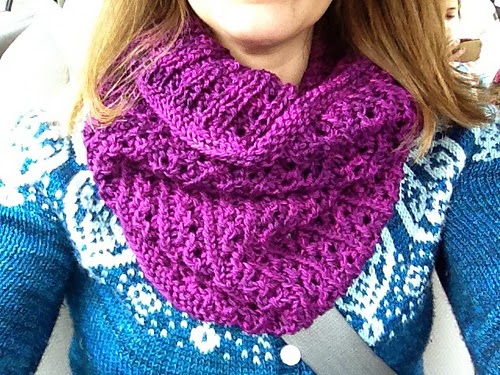 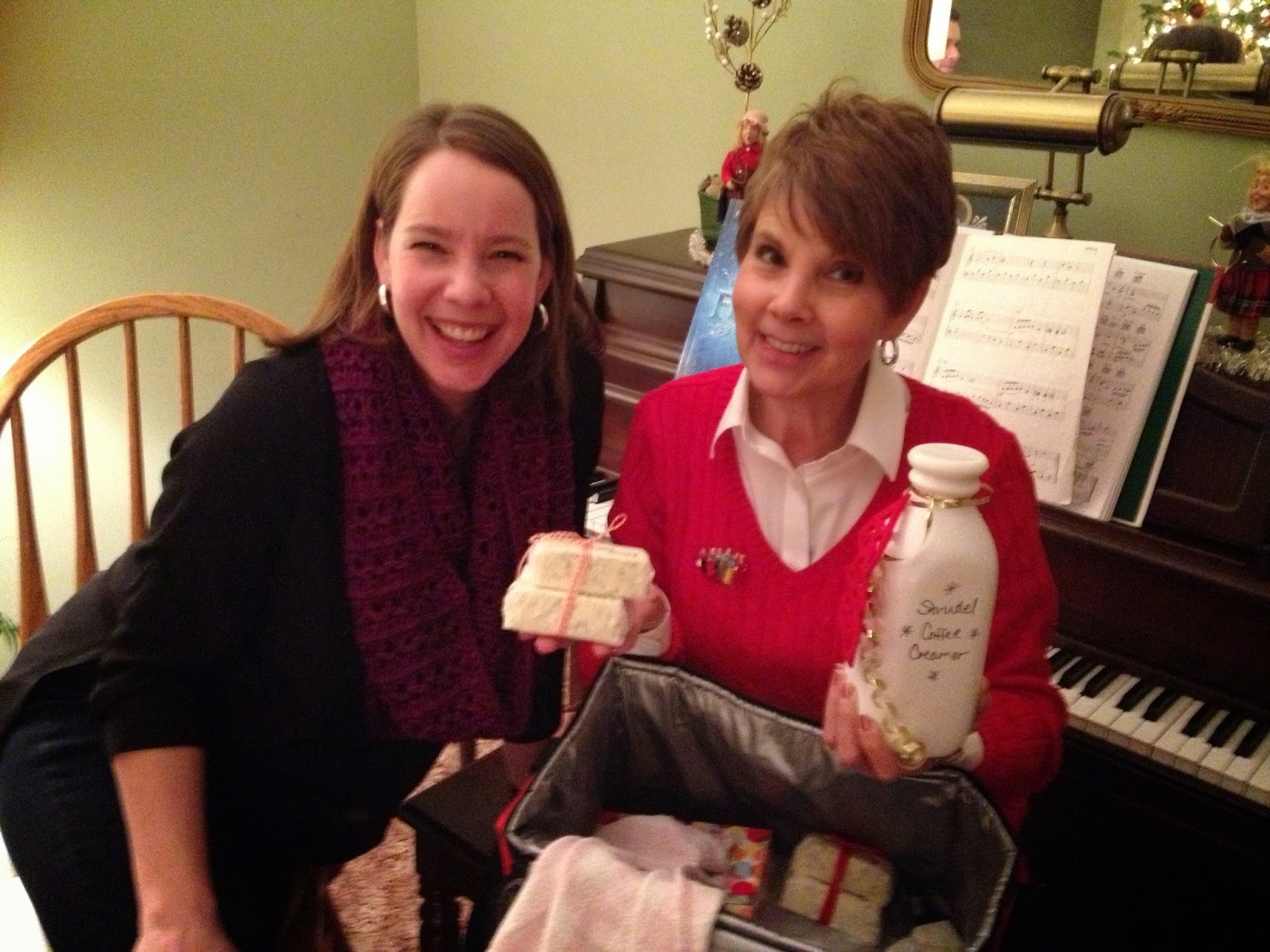 Here's my sister and mom with their two handmade gifts.  Natalie with her cowl, and our mom holding some of the homemade goodies that my sister made for her.  That's some sort of flavored coffee creamer in one hand and some herbed butter sticks in the other hand.  I remember there were also cheesecake bars in the cooler on her lap.  It was a very dairy-heavy gift!  Absent from the photo are the button hangers my mom made for me, and which my husband immediately claimed because they are his "favorite hangers to use for his work shirts".  Hmmm....who knew he had a "favorite hanger"?
Believe it or not, the cowl was the only gift I knit as a Christmas gift.  There was one more Christmas-themed thing that I knit, and I'll post about that soon.  But I'm happy we always do the homemade gift exchange...those gifts are by far the most fun to give and receive!
Posted by Nicole at 7:11 AM No comments: 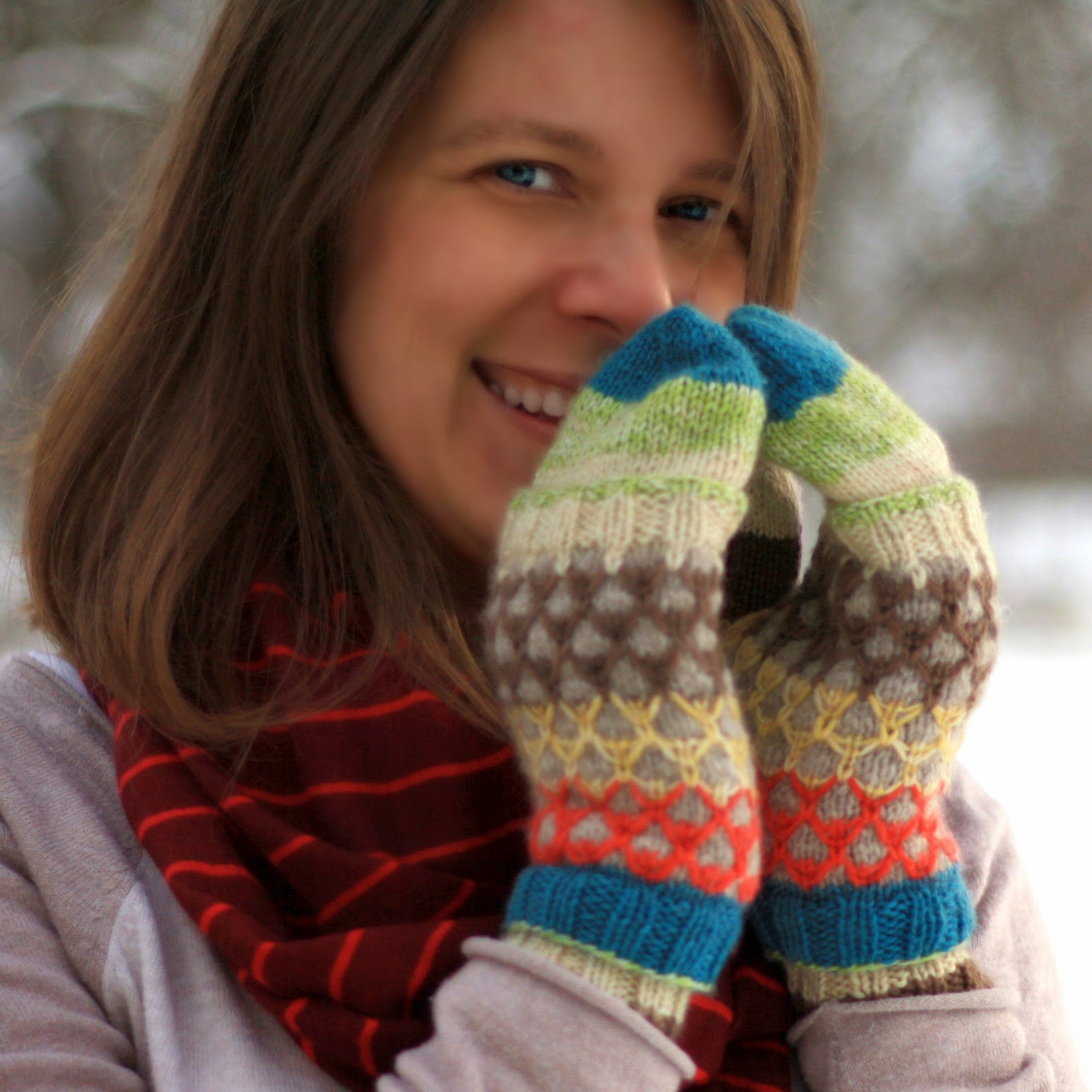 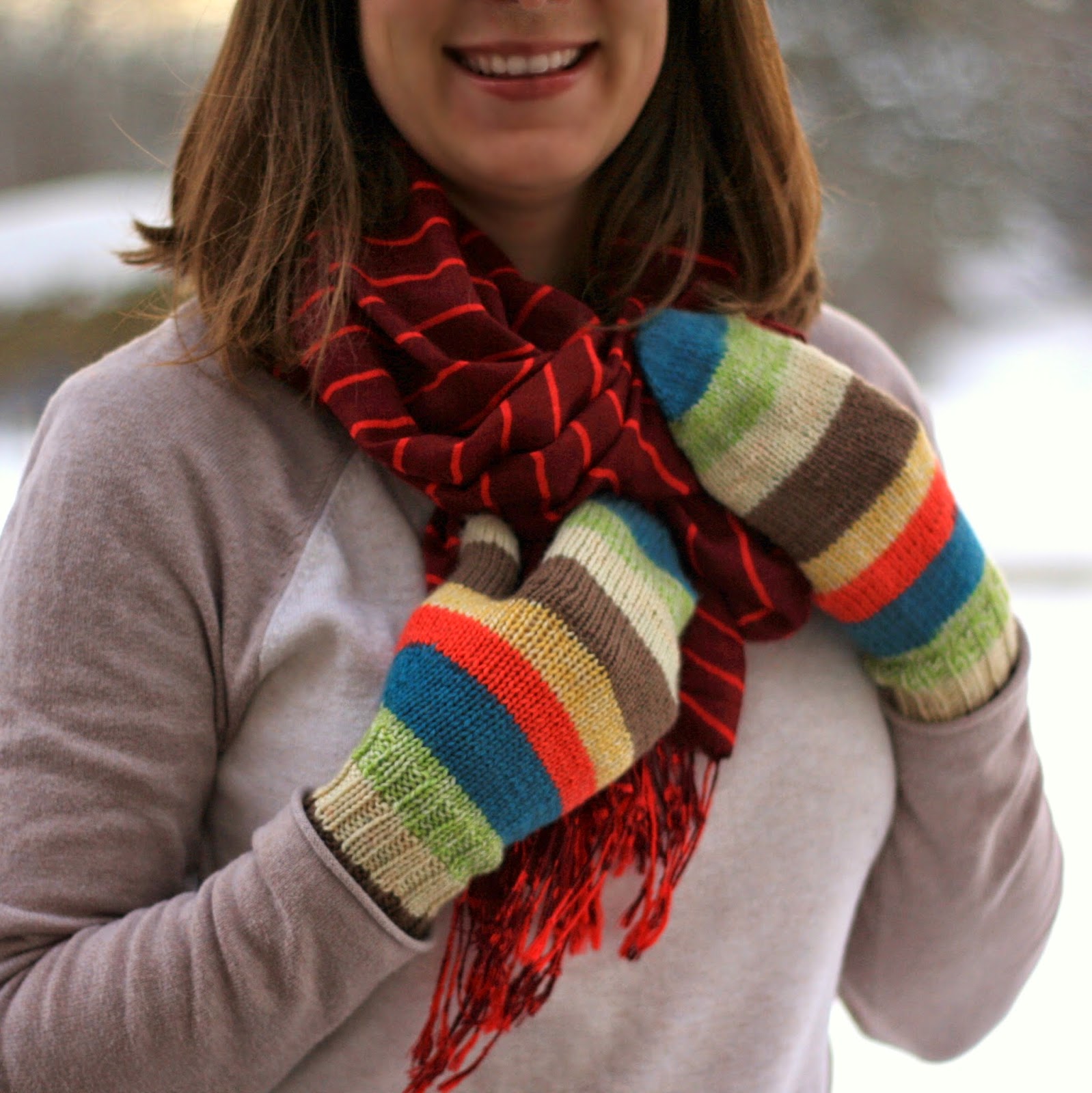 Last month, I was looking through Ravelry for a specific type of pattern.  This is why I'm a designer...I'm always looking for something very specific.

This time my criteria was some sort of glove/mitten to give to someone who lives in a warm climate but often visits cold climates.  I didn't want it to be something that would only be worn on winter trips, I wanted it to be something my friend could wear when at home, too.

But what exactly is that?  A medium-weight mitten?  I wasn't happy with that.  I wanted something that was convertible, or was made in layers so it could be something that would actually be really useful in a very cold climate, and also on the cool evenings of a warm climate. 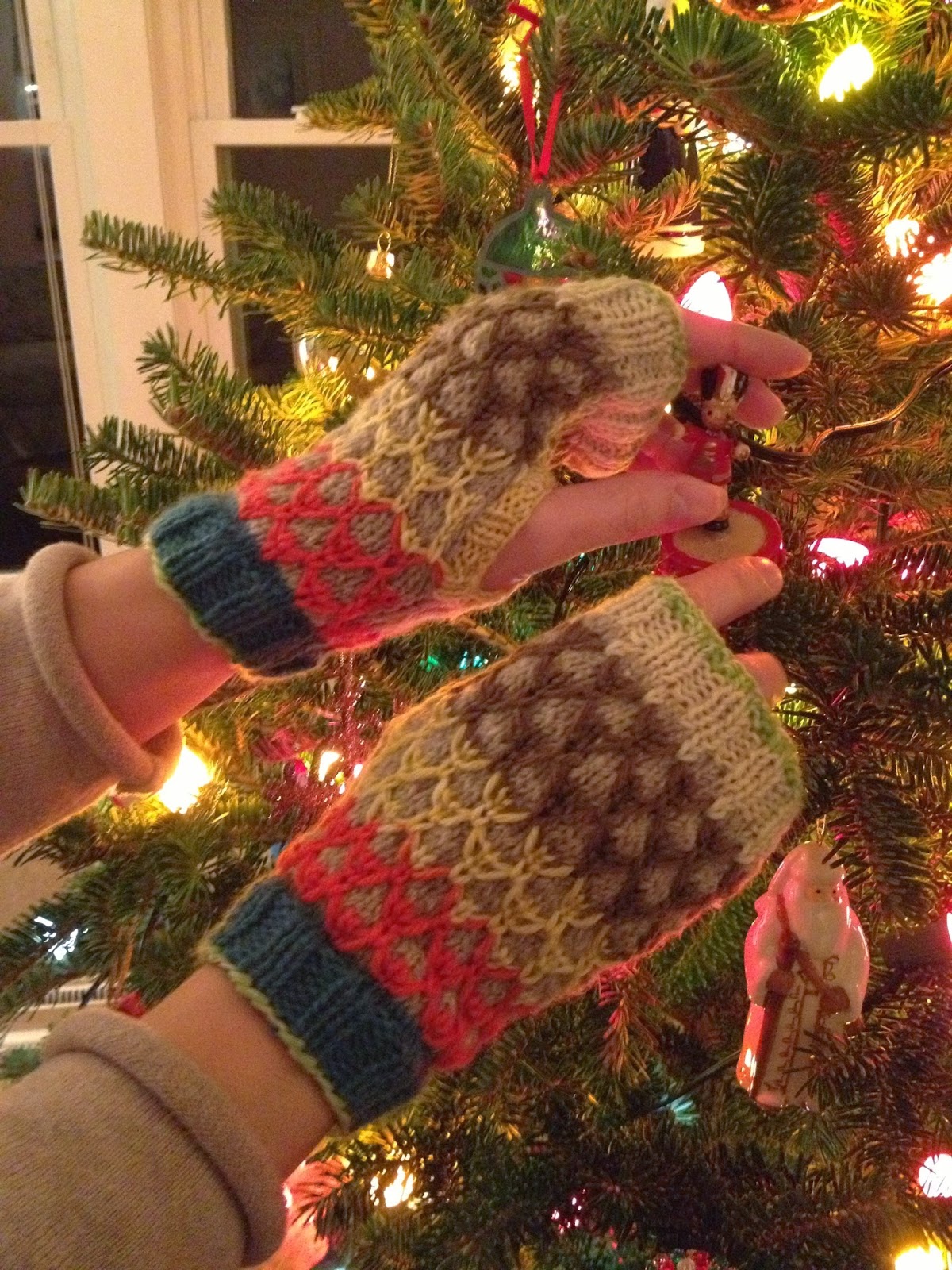 This pattern is written for three sizes: 6.5" (7.75", 9").  Those sizes roughly correspond to Child (Women, Men), but, measuring around the circumference of the palm of your hand, you should pick the circumference that is closest to your own.  Instructions on how to add or subtract circumference stitches are included in the pattern, and modifying the length of the mittens or fingerless gloves is just a matter of knitting more or less rounds than instructed in the pattern.  It's a very easy pattern to modify for a custom fit.

More details as well as a link to purchase the pattern can be found on the pattern page, here! 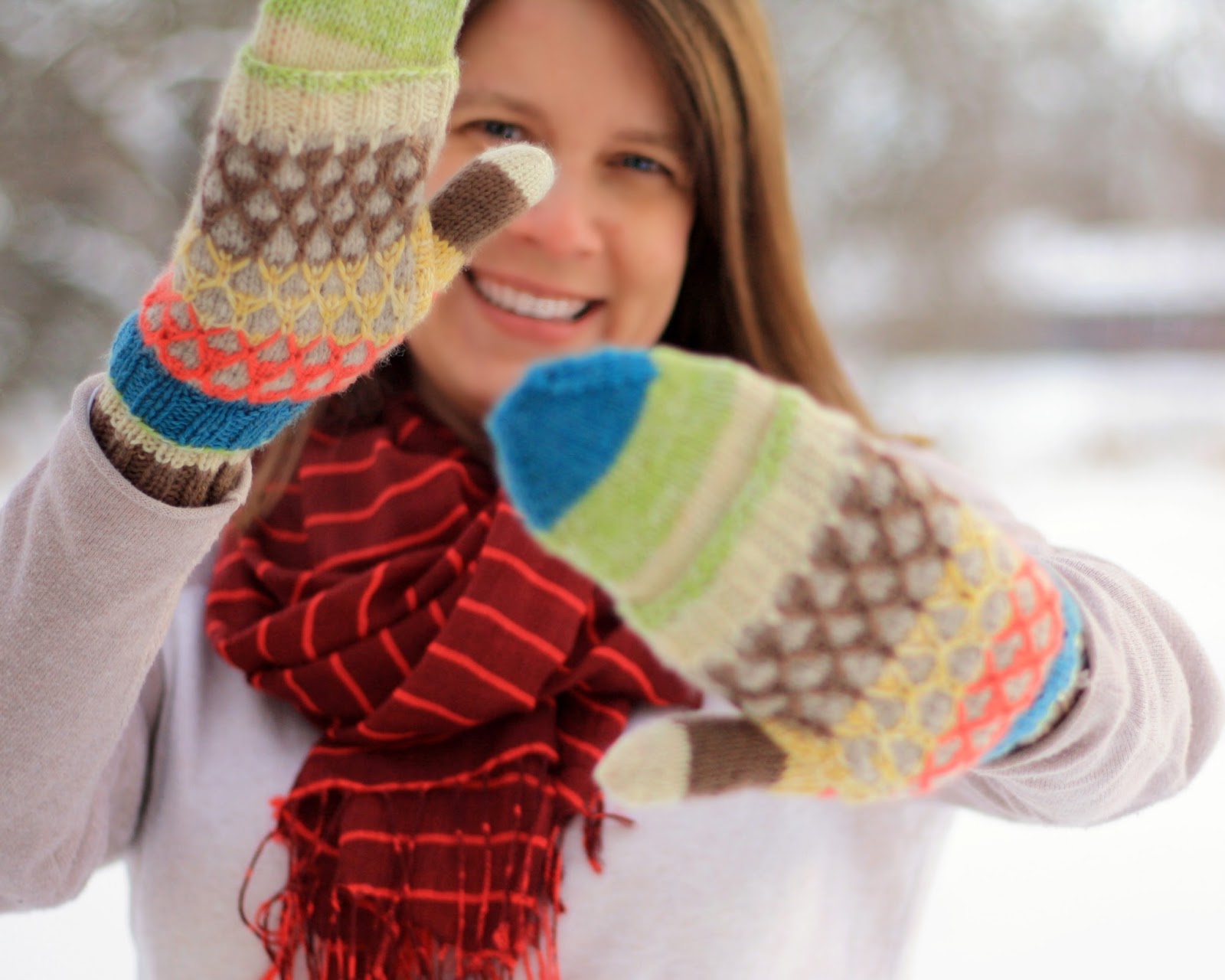