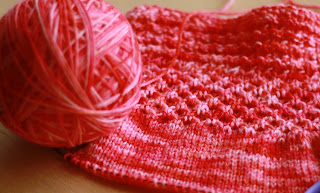 I've only published one design this spring, which makes me feel like a slacker.  But the truth is, I've been working really hard on two designs, one sweater and one dress, but those patterns won't be released until late summer or early fall.  I have learned my lesson about releasing patterns at the "wrong" time of year (they have a really hard time finding an audience.)  So, as difficult as it is for me to have finished patterns and just hold on to them, I'm going to do it!  It's fine though, it gives my pattern testers plenty of time to get their projects done (which is great because they both take a fair amount of time!)

I like to keep my designing to one or two things at a time.  Mostly because it's difficult for me to remember all the details when testers ask me questions if I am already three more projects down the road.  So I tend to work really intensely one one thing while the pattern I just completed is being tested and prepared for release.  Because of holding on to these two designs though, and because I have a 10-pattern e-book that I'm just casually working on, I really have about 4 projects going on right now.  And so far, it's all good.  I'm just being really dilligent about keeping really detailed notes and not relying on myself to actually remember anything.

I bought a skein of yarn from my LYS a couple months ago and it has been calling to me since then.  It is fingering-weight merino wool dyed with beautiful shades of pink and orange.  I am a sucker for pink, and this colorway reminded me a lot of the skein of Malabrigo "Light of Love" sock yarn that I used for a scarf last winter.  This skein was made by an independent spinner from Peoria, Illinois.  She just labels her yarns "E's Yarns", and only sells locally.  I'm hoping that next time I visit the yarn shop she will have refilled her display basket with some gorgeous new colors.

Since I was at a stopping point with my dress design (until I can try it on my little model, anyway), I started swatching with this pink yarn yesterday.  I have a new little girl's pattern in mind and I think I've got it all figured out.  Now I just need to do the math and see if I'm going to have enough yardage to make the size I want to do as a sample!  I was a little hesitant to do a pattern sample in a yarn that I know most people won't be able to purchase, but the fact is, it's just your basic fingering-weight yarn.  I can think of a dozen perfect substitutions right off the top of my head (including that Malabrigo sock yarn I mentioned).  So I'm just going to go with it and knit up this yarn so it will stop staring at me from across the room.  ("Nicole......when are you going to pay attention to ME??....I'm so pretty.....just come over and give me a little pat........)