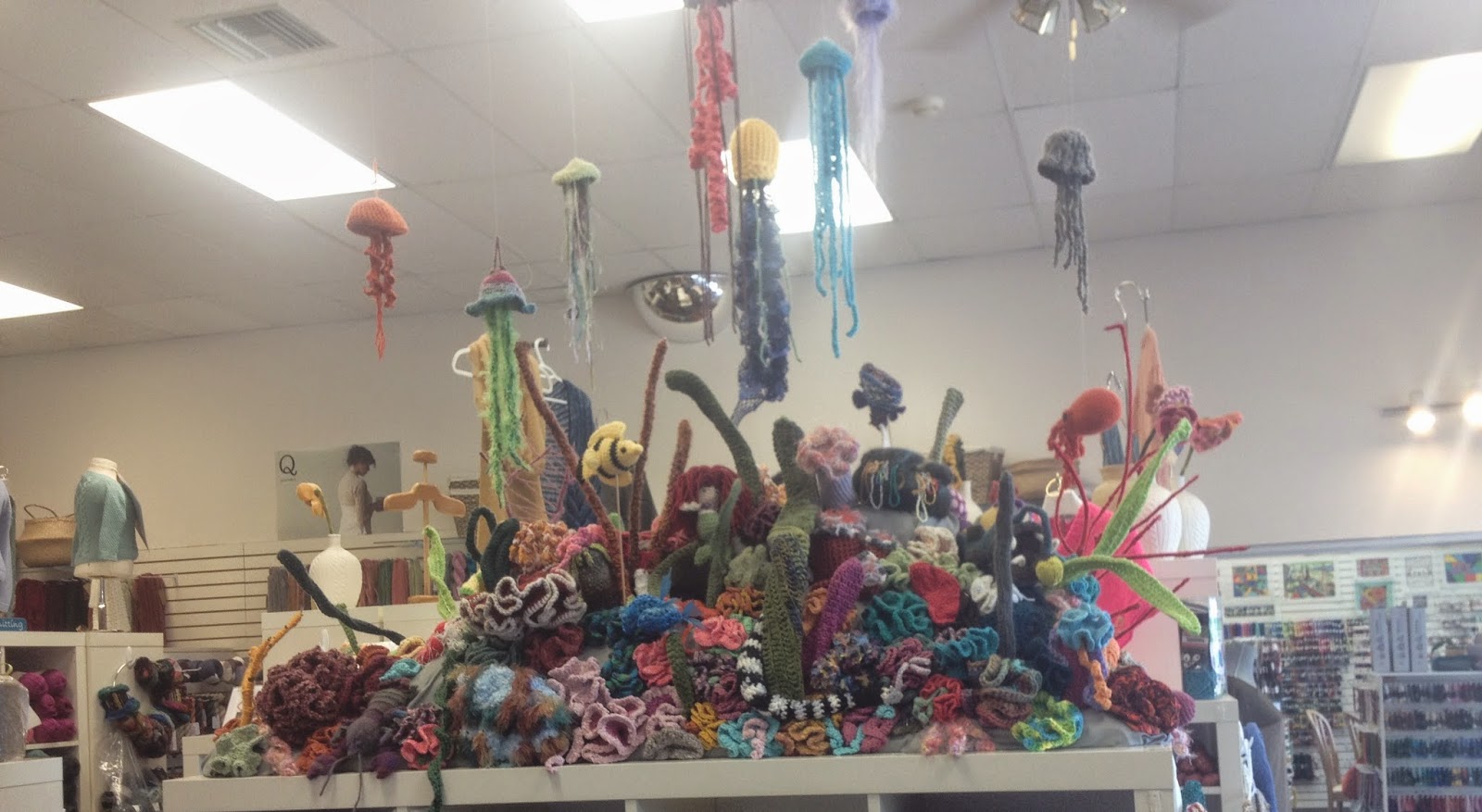 I have been terrible about blogging this summer, but only because I've had non-stop projects!  Like anything, the more I do, the less time I have to talk about it.  But I've taken tons of pictures and have plenty of stories for the blog....one day! :) 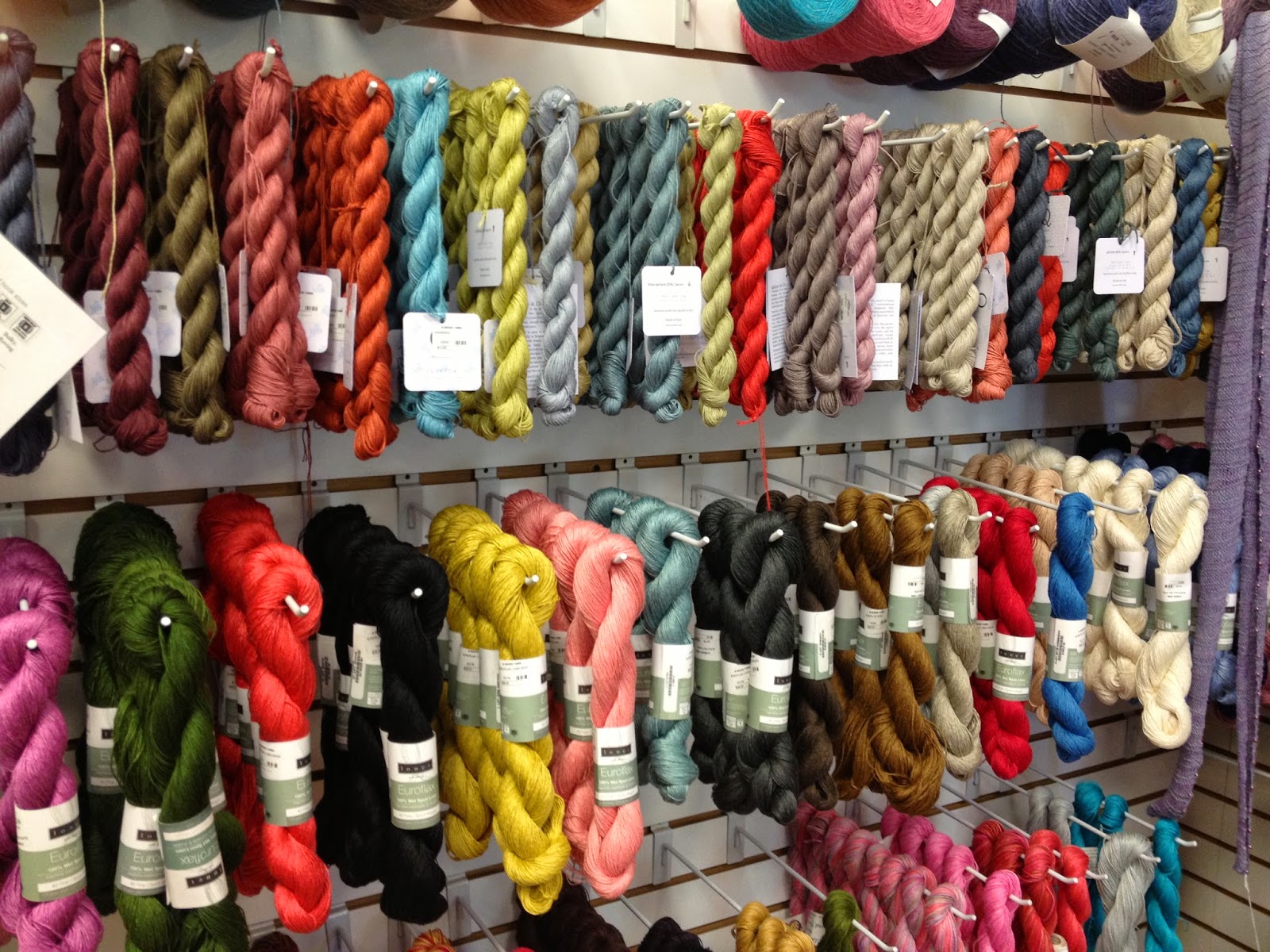 My family kicked off summer by taking off to Siesta Key, Fl at the beginning of June.  Like all vacations, we made sure to stop at a yarn shop or two while we were on our travels.  I think my husband actually likes going with me, and while my kids may not technically "like" it, they are patient and well-behaved and find someplace to sit and hang out with Dad while Mom pets the yarn.

The first shop we went to was a bust.  It would have been lovely if I was into spinning art yarn, because it was really more of a spinning studio than a retail shop with lots of yarn for sale.  But it wasn't my cup of tea, so after a quick lap around the tiny studio, we left.  Luckily, our second try more than made up for the first place!

A Good Yarn is a yarn shop located just across the bridge from Siesta Key, in Sarasota, Fl.  It might have the most impressive inventory of any shop I've been in.  It's nice-sized and very well organized, by weight.  It's big enough to have a lot of inventory, but small enough that you can easily look around and feel like you've seen everything they have to offer in an hour or less.  The thing that floored me was how many yarn lines they have that I've heard of and thought, "I'd love to see that yarn in person and maybe give it a try".  They were ALL there!  They even had a wall of Quince & Co. Linen, which I've often wanted to try, but didn't want to pay shipping for a single "experiemental skein", and I didn't want to order a project's worth without knowing what to expect.  (Side note: Sparrow is FANTASTIC.  The best linen I've come across so far.)  I probably spent an hour and a half looking around and trying to narrow down my purchases, and even then, I only got it down to a little over $300 worth!  (But I didn't feel bad about that since it was my first big yarn purchase all year, and I got 17 skeins for that price.  My only trouble was wondering if I'd have room in our suitcases for it on the plane trip home!)  My purchases included 6 skeins of Quince sparrow, 2 skeins of Madelinetosh pashmina in a tropical colorway dyed just for this shop, 5 skeins of Anzula - 4 worsted in a tonal beige colorway and 1 sport-weight in a slightly off-white,and 4 skeins of Sirdar Snuggly bamboo yarn.  And even after all those purchases, I still had to make a note on my phone about 4 or 5 other yarns and colors that I had seen there that I wanted to later order on-line.  I could have easily spent $1000 there if I didn't have money & suitcase space restraints!

In addition to the terrific inventory, the owner came right up to me as soon as we walked in, introduced herself and proceeded to show me around.  When I showed interest in something, she would show me a few other things she thought I might like, too.  She and the other woman who were working while I was there were both super-friendly, helpful, and not at all of the "snooty yarn shop" persuasion.  (If you've been in a handfull of shops, I'm sure you've come across one or two that seem to be staffed by the snooty salesclerk in the iconic "Big mistake!" scene from "Pretty Woman".  These ladies were exactly the opposite of that!)


I didn't even start a project with my new yarn while I was on vacation though, because I had two substantial projects that I packed to work on over our 12-day trip. 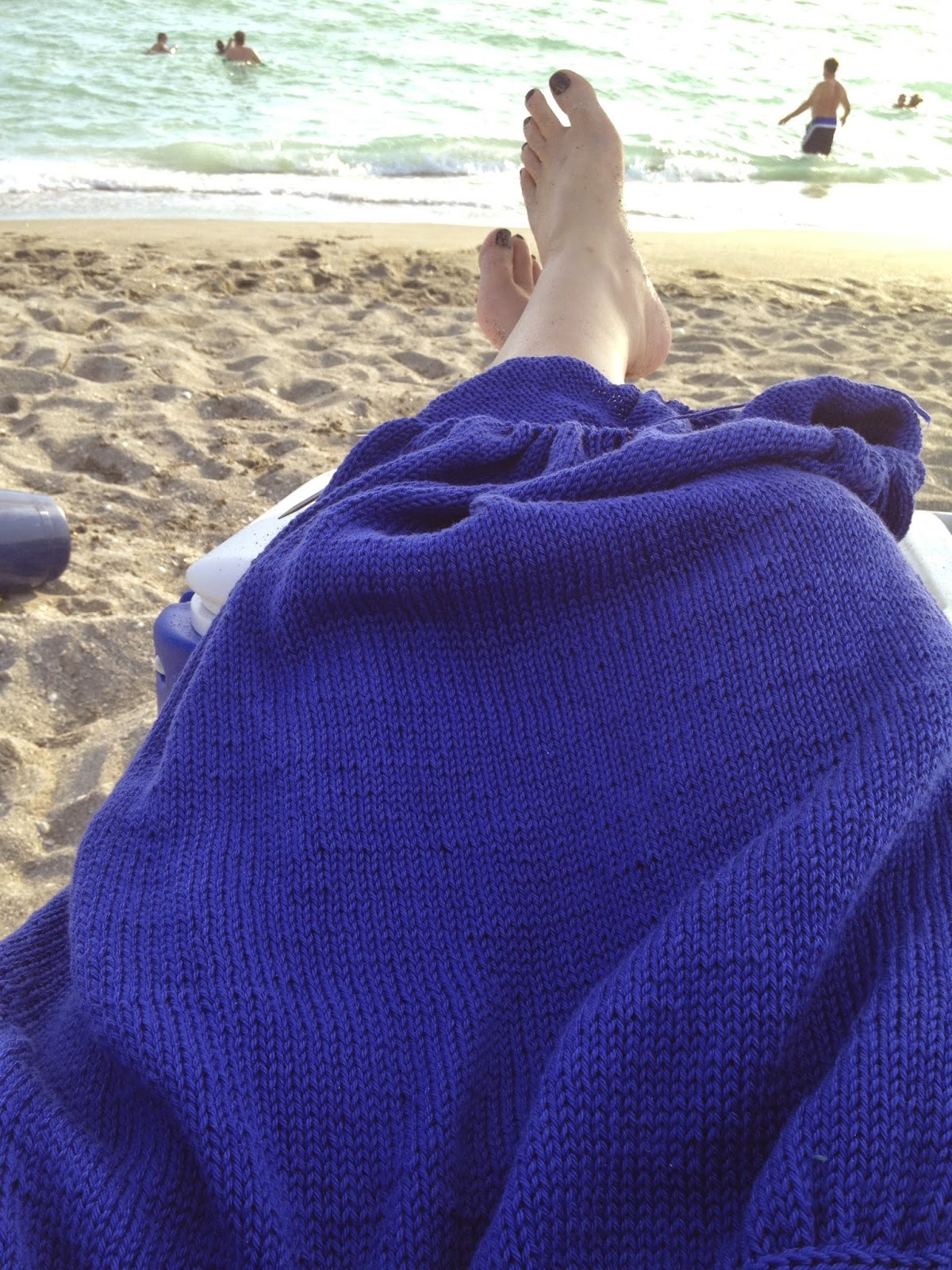 The first was a beach dress.  Yes, I might have planned ahead and finished this before I hit the beach, but it didn't occur to me that I might want a beach cover-up until exactly 3 days before departure.  By the time I got on the plan, I was done with the bodice, so I just had an endless stockinette skirt with a little made-up lace along the bottom, plus i-cord straps to finish the project.  It was all done on the fly....no pattern.  Just kept trying it on until it seemed right. 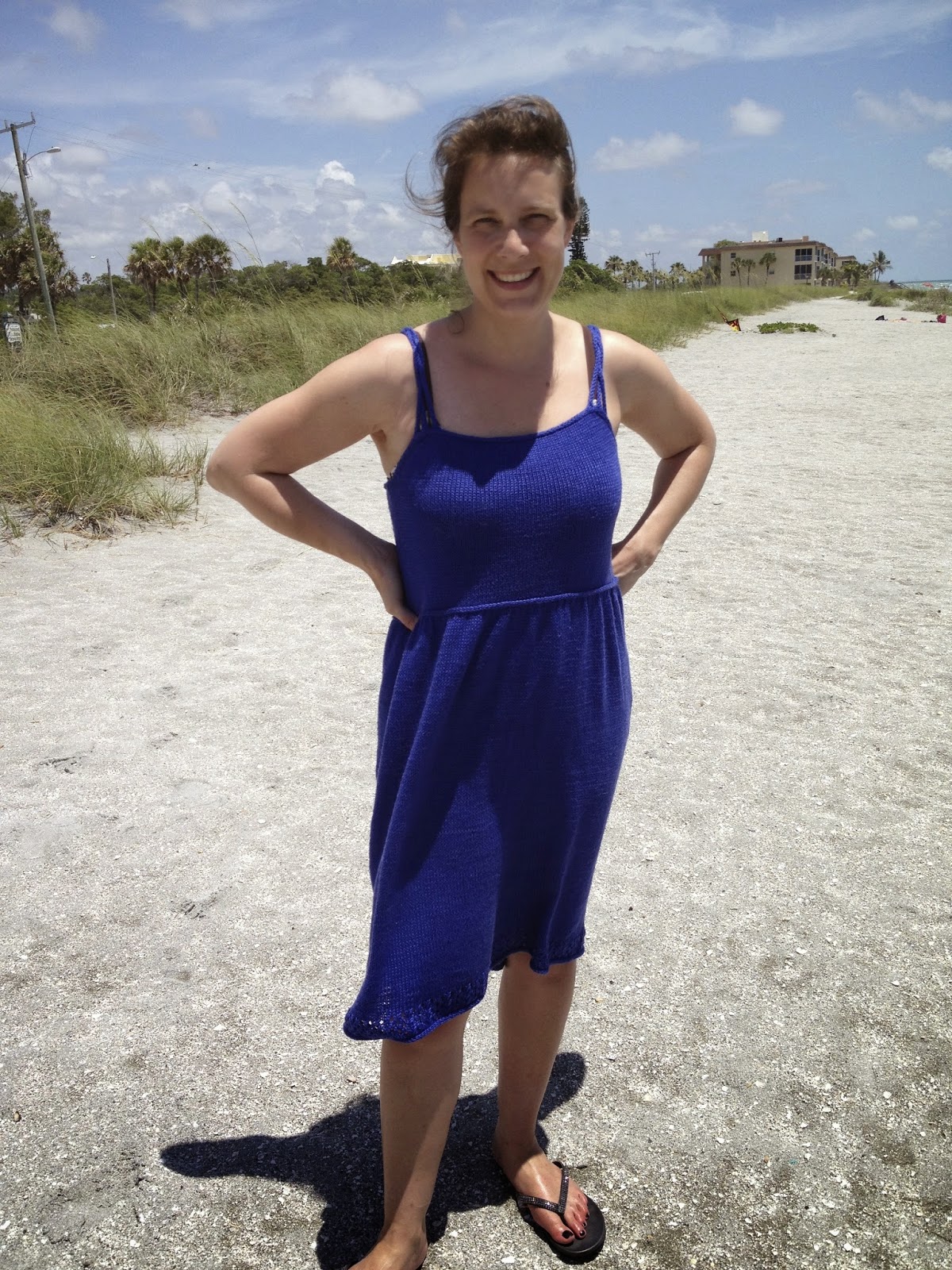 I think I had it finished by Friday, so it took just under a week to complete.  Probably seems fast for a dress, but it was dk-weight yarn (Cascade Ultra Pima), and I had a lot of waiting in the airport time, plane ride time, and knitting on the beach time in there. 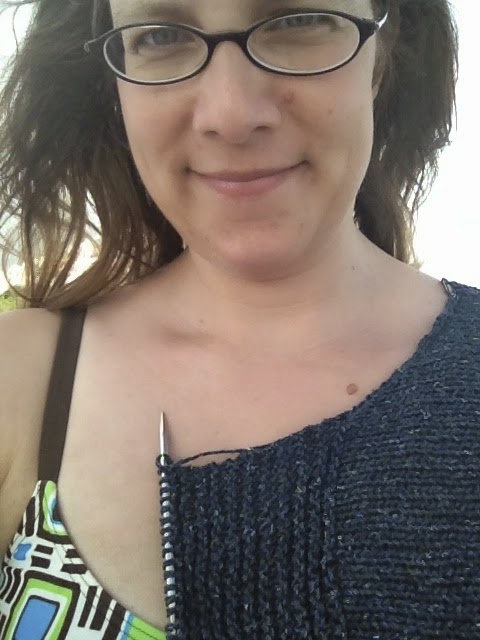 Once that was finished, I started in on my Francis top, which was made from a pattern.  I used the recommended yarn, Shibui Heichi, which was a very nice, rustic silk.  I had a love-hate relationship with this project.  Some parts of it were a pleasure to knit, but I found other parts unnecessarily complicated.  It's a simple shape and really doesn't need to have such a complicated construction.  While I'm all for learning new things, I'm also a big fan of patterns that are easy to alter to suit your taste, and the absence of a schematic with detailed measurements makes it next to impossible to alter this top.  The pattern will work if you just trust it as you go (except I did have issued with the short rows at the end of each back section...the numbers just didn't work for me, but I was able to fudge it and make it work).  Just don't go into it thinking you're going to make it wider/shorter/longer/alter the sleeves/neckline/etc.  It is what it is, and until you've knit it at least once, you're not going to know which end is up until you're well into the pattern. I finished this project right after we got home.  It would have been done on the plane ride home, except it ends with grafting in garter stitch, and I needed to refresh my memory on that before I attempted it.  If I ever knit this again, I will make one side wider and the other narrower so the seam is at one side of the garter stitch panel.  My stockinette Kitchener Stitch is pretty polished, but I don't graft in garter often enough that my stitches look very consistent. 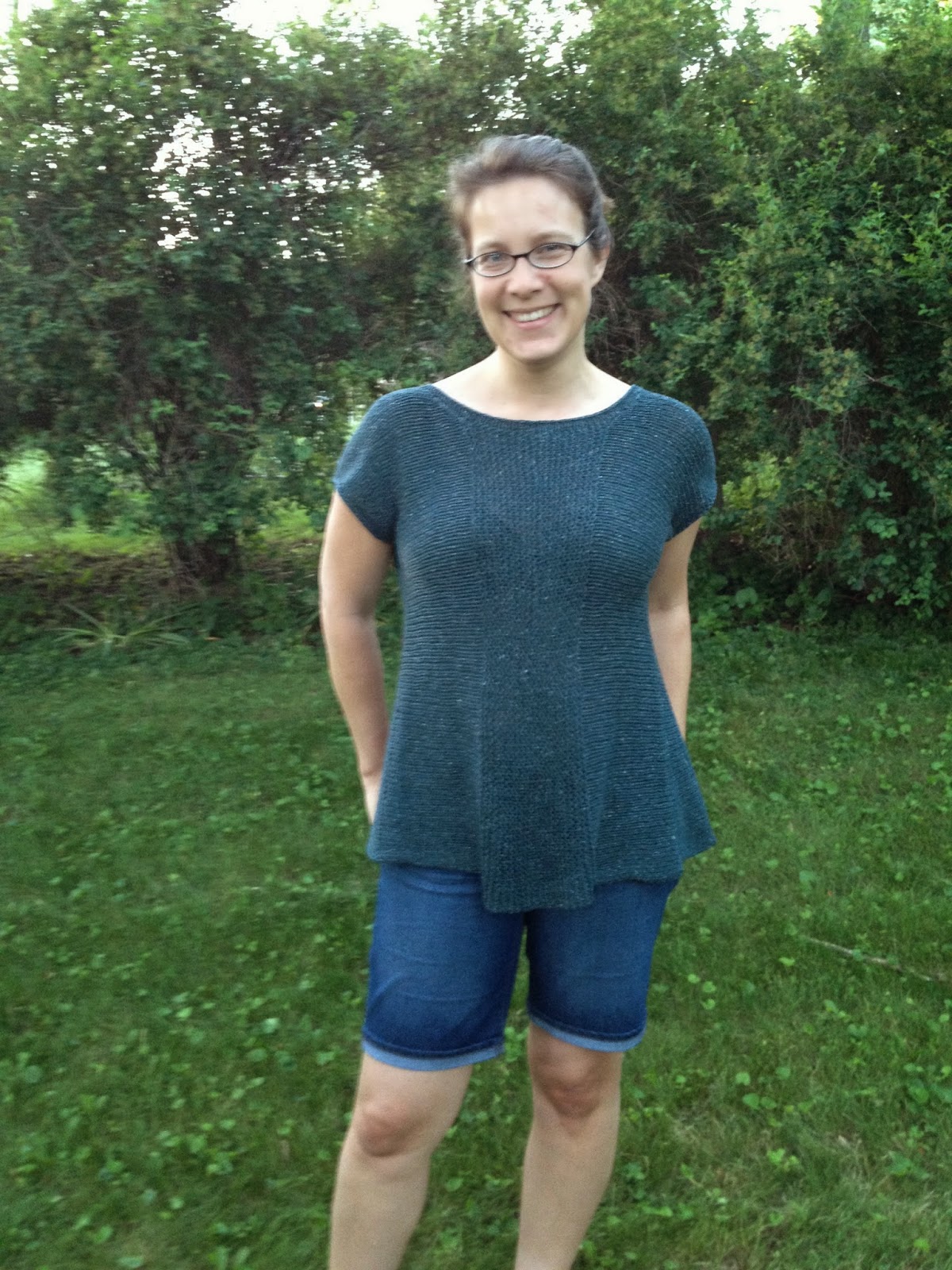 Overall, I'm happy with this top (after I sewed the back down...I didn't like the feeling of being half-naked on the one day I attempted to wear it with the back open as it was designed), and I do wear it pretty often.  The silk yarn is beautiful and nice against my skin, I would definitely use it again.

It was a lovely family vacation full of fun yarn-y stops and projects.  Can't wait to see where we decide to go on our next trip!