We Interrupt This Knitting Blog.....

I've been up to some stuff, and shockingly, not all of it involves knitting!  I've been saving my nickels for a couple years now with the goal of being able to replace our living room & family room furniture.  You see, what happened was that we adopted two kittens.  They were two baby orphan kitties whose mom was kidnapped by well-intentioned people who didn't realize she had recently given birth and would be abandoning two babies who were just a few days old under the bushes outside our church.  (By the time we figured out what had happened, they had been separated for a few months and it was too late to try to re-establish that bond.)  By some miracle, the kittens survived at least one full day and overnight in early-April weather (we're talking overnight lows still near the freezing mark), and they were heard meowing loudly by a preschooler who walked by the bush they were hiding under.

So when I happened to stop by the church the day after they were found, and I saw these two tiny furballs on the church secretary's lap, my kitten fever kicked in.  (Some people have baby fever - I am much more prone to kitten fever.)  The church secretary told me that she would love to keep them, but she had cat allergies, so she knew she couldn't.  I told her I needed to go home and talk to my husband, but that I was definitely interested in adopting them.

My husband wasn't too difficult to convince.  He grew up with pets (dogs), then lived with my childhood cats that my parents transferred to my guardianship once I was out of college.  (They wanted to get rid of the cats when I was in high school - one of the cats had peed down a heat vent in the floor.  Bad cat.  I totally understand where my parents were coming from, but I was very attached to those cats.  I huffed and puffed and begged, and maybe I threatened to run away or start being a juvenile delinquent.  I don't remember how it all went down, but for some reason, my parents changed their minds about sending the cats to a farm....."As long as you realize they are YOUR cats and they will live with YOU as soon as you are on your own!"

But those two cats had died a few years before, and I was now cat-less.  I had two kids, but they were 4 & 7 now, and I was starting to feel like I wasn't running a marathon every single day.  I wasn't overwhelmed by the idea of taking on two newborn kittens, who, by the way, need to be bottle-fed every 4 hours around the clock, kept warm with heated rice bags, and "cleaned" in a particular way, because that's what stimulates them to poop.  Instead, I felt like, "I have had cats all my life, I've now successfully kept two kids alive for the past 4 & 7 years, I'm probably exactly the right person to take these two kittens."  And I was very happy that my kids would get to experience growing up with pets around.  I didn't even let the vet discourage me when I took the kitties to get checked out and she told me, "Don't get too attached.  Kittens who are abandoned this young don't usually make it.  You can do everything right to take care of them and they might still die."

So here's what I didn't realize before I adopted these kittens: newborn kittens learn a LOT from their mama cat.  That mama doesn't just feed them, groom them, and keep them warm, she shows them everything - how to eat, how to use a litterbox, how to play, how to sharpen their claws.....and since I am not a cat, these two little ones did not immediately figure out that they were supposed to be imitating me.

Take, for instance, learning how to eat.  For the first month of their lives, they ate formula out of a tiny bottle.  That was pretty easy - stick the bottle in their mouth, squirt a little taste of the formula onto the tip of the bottle, and they figured it out pretty quick.  But transitioning to kitten food from a bag?  They had NO idea what they were supposed to do with that.  I tried putting a piece of it in their mouths.  I tried getting down on all fours and putting my own mouth near their food bowl and making eating sounds.  I tried putting their heads near their food bowls hoping they would think it smelled like something they wanted to investigate (with their mouths!)  I tried putting their formula on the food and holding it up to them to smell and taste.  It was shockingly difficult to get them to eat food, and I'm sure if they had a cat mama to watch & imitate, it would have been a snap.

They did eventually manage to learn to eat food.  They did learn to use the litterbox.  They did become quite competent groomers.  But there was one subject that they totally failed: appropriate scratching.

I won't go into the whole 7-year saga of trying to train them to scratch in one of the 5 appropriate places we had in the house for them (or outside!), but many strategies were attempted.  If it's "scratching advice available at the vet's office or on the internet", we tried it.  And once we hit the 7-year mark, I was ready to admit defeat.  Despite being generally against declawing, I had to admit this might be a special case.  I felt like I had failed the cats by not being able to teach them appropriate scratching behavior, but we were at the "declaw the cats and replace the trashed furniture" or "don't declaw the cats and let them run your lives" crossroads.   I was prepared for it to be terrible, and it was - for about 3 days.  After that, the cats started bouncing back, and maybe 10 days after surgery, they were pretty much acting normal.  (I know that kittens often act normal almost immediately after declawing, but older - and fatter - cats understandably have a rougher time of it.)  Now....about 6 months later, I know it was absolutely the right choice for our situation.  That doesn't mean I'd do it again if we got another cat in the future, but for these cats, it was the right choice.

So anyway, that brings me back to replacing the furniture!  We got new living room furniture last month, and I've been looking for things to put up on the one large wall in the room.  I was watching reruns on hulu last winter and saw this idea -

I thought it would be an interesting thing to sit down with my husband and kids and make a list of character traits we think are important.  I think that one of the things that is lost in my kids' generation is time to think (because they can so easily fill every minute with distractions.  I am in a constant battle with my son to keep his cell phone out of the bathroom....you don't need to watch Minecraft videos while you're doing your business!)  So to take the time to have a conversation where they have to think about what qualities they appreciate in people, or want to have themselves, or that their parents think is important....it seemed like a worthwhile thing to do.  And to drive the point home, we made a big wall-hanging using the words we came up with together. 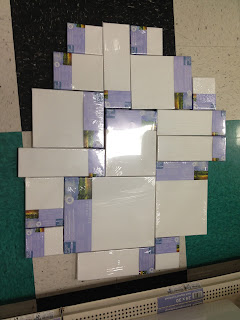 I found there was a definite gender difference when it came to what traits we listed.  My daughter and I came up with words like "love, kindness, empathy, grace, and optimism" while my husband and son listed "dependability, honesty, responsibility, and commitment.

Step one for this project was to go to Michael's Craft Store and buy a whole mess of canvases.  We lucked out and happened to be there on a week that their canvases were 40% off.  Even still, I think the 17 canvases we bought totaled somewhere in the $80-90 range.  I think the largest one we got was 11x14" and the smallest were 5x7".  I laid them out on the floor of the store because I wanted to make sure I was getting sizes that would fit together in a way I liked.  The other people in the aisle didn't even seem to think I was nuts once I explained what I was doing. 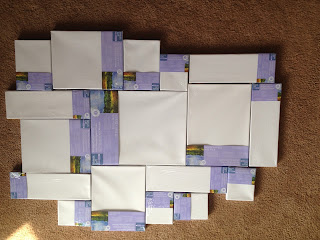 Once I was back at home, I played with their arrangement a little more until I was totally satisfied.  Then I took a picture so we would know which way to orient the word on each canvas so they would all be easily readable once the canvases were all hooked together.  I printed out this picture and we wrote the words on each canvas in the picture so we could plan ahead for the larger or more-important words to go on the larger canvases, and the smaller or less-important words to go on the smaller canvases. 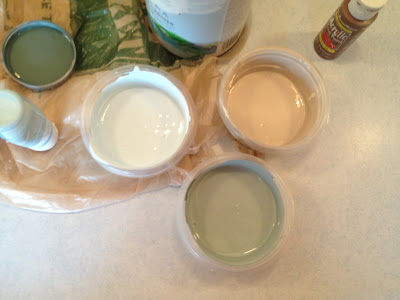 I had just finished another painting project for the same room and had about half of the sample-size of paint left that I had bought from Lowe's (that's the teal green in the pic).  I bought a couple bottles of craft paint - one in lighter blue, one taupe, and one white.  I used the white to mix lighter versions of the three basic colors we were going to use (teal, light blue, & taupe). 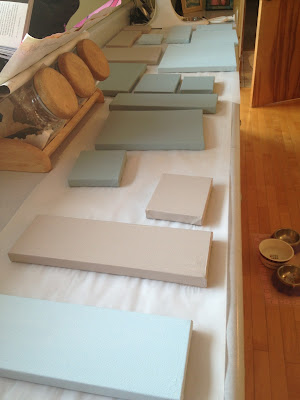 We used the lighter versions to cover each canvas with a background color.  We used the printed out pic of the canvases to also figure out what color to paint each canvas so we wouldn't have a bunch of the same color touching once they were reassembled.

We then used the full-colored versions of each paint to paint words on each canvas.  That way, they stood out more from the background color and were easier to read. 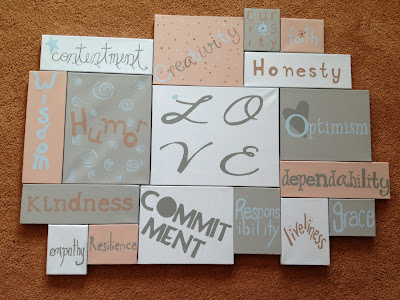 I'm not gonna lie - my daughter and I did the bulk of the word painting.  The boys did help, but they were easily frustrated and claimed that it was 'too hard to make it look nice'.   I made it easier by using my friend's Cricut machine to cut out & trace many of the letters in different fonts so all we had to do was paint in the outlines.  But some of them were done freehand, and I like the fun little touches on some of the canvases.

Once the words were all painted, we assembled the entire collection of canvases face-down on a hard floor.  Then we took paint stirrer sticks and laid them across areas where we could drive small nails through the paint sticks into the wood that the canvases are stretched over.  I probably used about 10 paint stirrer sticks to connect the whole thing and provide enough support that it wouldn't come apart once it was on the wall.

I think it turned out great, and I love that it's something we all made together that we can see in the middle of our house every day!