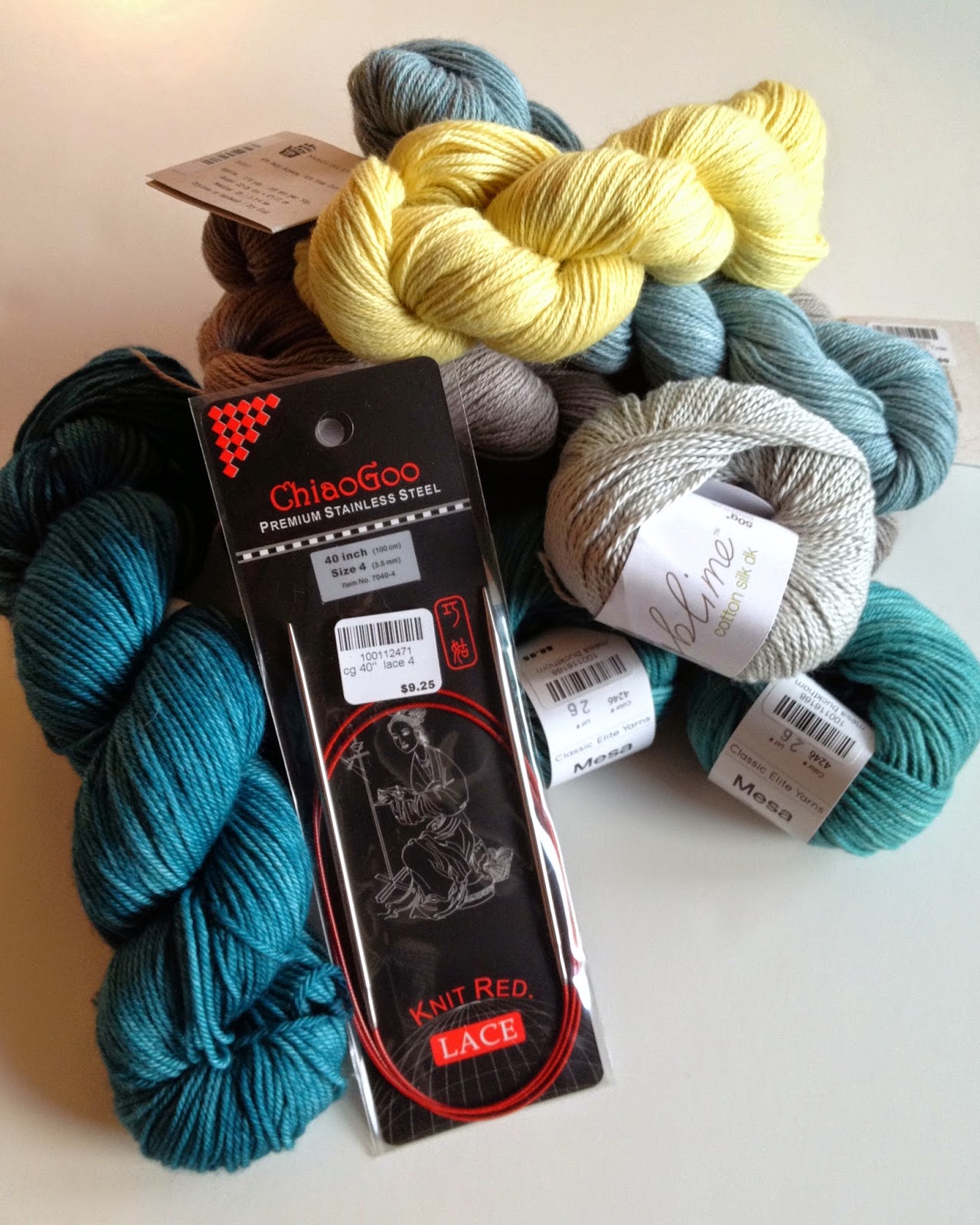 We took a weekend trip to Chicago to visit a couple friends.  One is a friend I've known since we were 7.  He and I were in class together from 2nd grade until he left in 10th grade to go to a different high school.  As adults, I've remained in various places in IL where we grew up, and he relocated to LA.  Luckily, his family still lives in IL, so he visits a couple times a year and I try to make it up to see him at least every few trips he makes.

The second friend is a mutual friend that my husband and I met in college.  He now lives in one of the western Chicago Suburbs, so we do get to see him every once in a while, but since we were already making the trip to see the California friend, it worked out well to meet the college friend for lunch the next day.  And as a bonus, husband and I got our once-a-decade night away from the kids, since my parent's house was on the way up to Chicago and they were willing to host overnight grandkids!

Anyway, I hadn't been thinking about visiting any yarn shops on this trip, but as it turned out, we got to swing by two different places!

On Saturday, we stopped by Knit Nirvana in Forest Park, IL.  I've been looking for Malabrigo Rios yarn in the Azul Profundo colorway and having no luck finding it online, so I was hoping I might get lucky since their website listed Malabrigo as one of the brands they carry.  I struck out though.  They had a lot of nice yarns, but most of them were brands that my local yarn shop carries, so I didn't have trouble resisting the urge to bring it home with me.  They also have a super-sweet dog that was at the shop with a woman I believe is the owner.  The dog is 13 years old and very mellow...he just wants to sniff you hands, convince you to pet him, and push his head between your legs, where he hides it while you pet him! 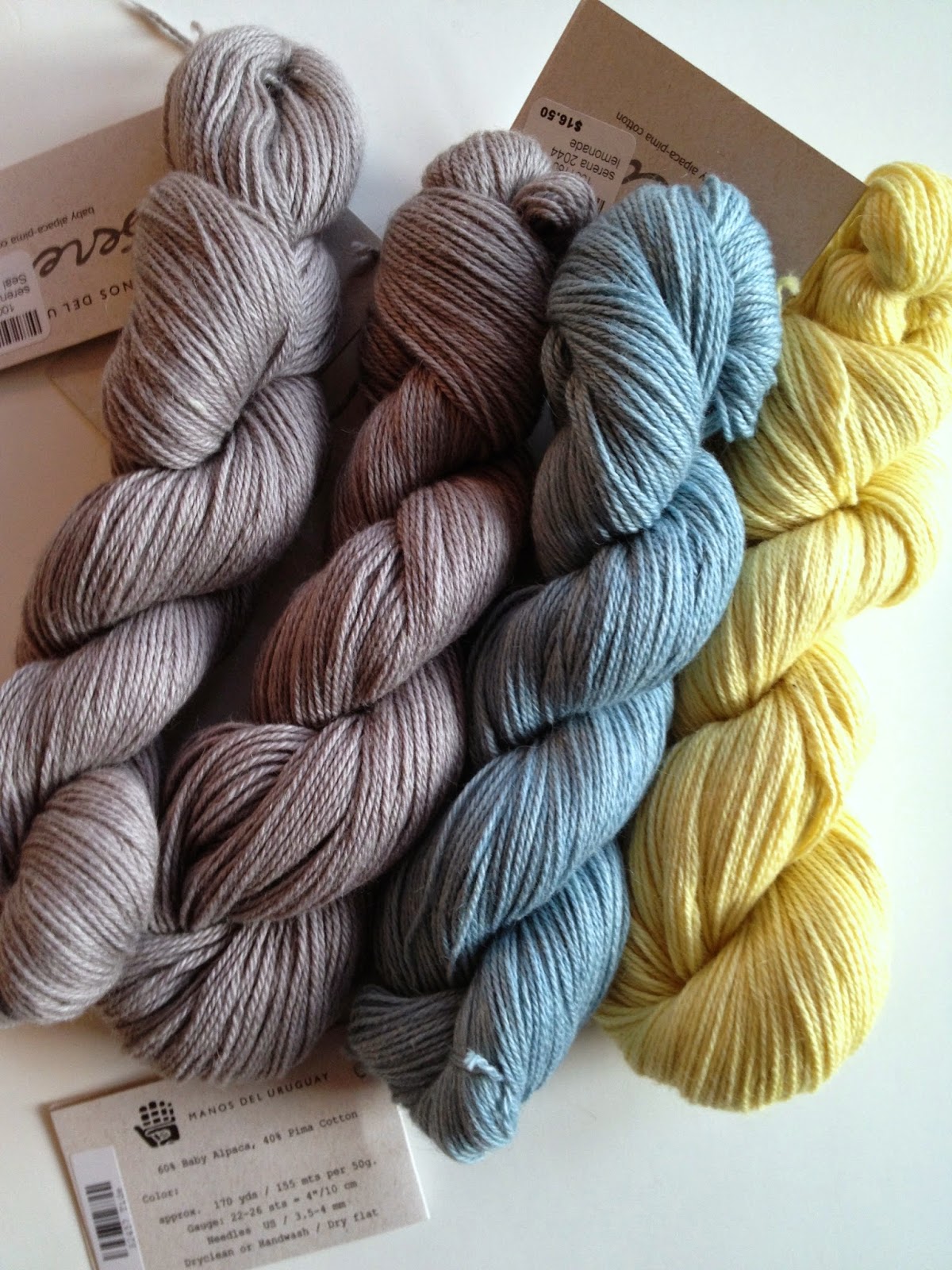 The next day, I found plenty to buy.  String Theory Yarn Company in Glen Ellyn was a cute little shop full of lovely yarns, a few of which I was not already familiar with.

I picked up 4 skeins of Manos del Uruguay "Serena", a cotton/baby alpaca blend that I previously used when I wrote The Sweetest Thing.  It's so soft and has a beautiful halo - I can not wait to turn these skeins into a pattern for next winter! 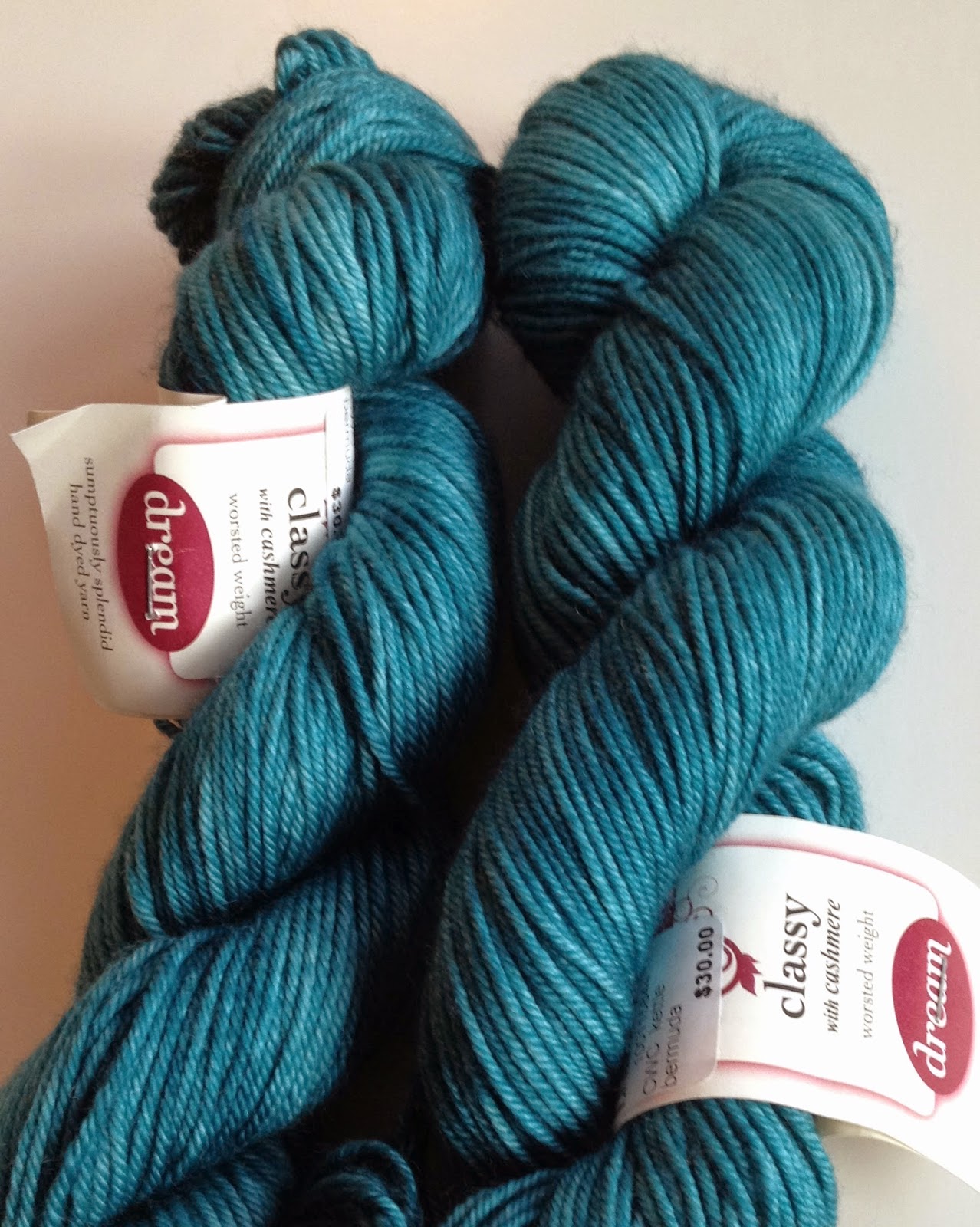 Another yarn that I was already familiar with, but couldn't resist bringing home a couple skeins of is Dream in Color's Classy with Cashmere.  It's $30 a skein, so it's a special treat for sure, but it is worth every penny.  Gorgeous tonal colorways, super, super soft, and just an all-around scrumptious yarn to work with and to wear!

Don't just take my word for it - Ravelry users give it a solid 5 out of 5 stars! 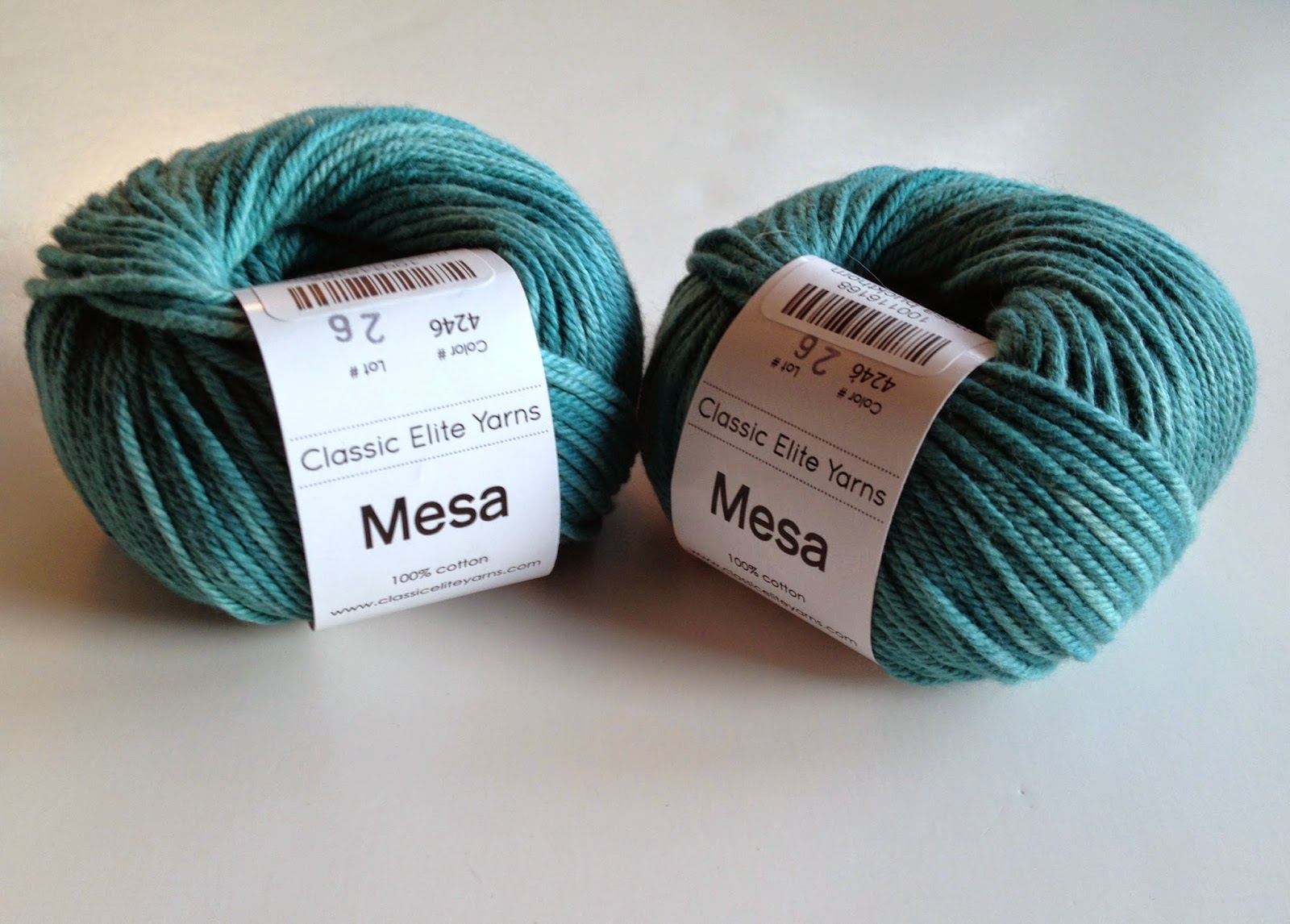 One of my new-to-me purchases was this "Mesa" from Classic Elite Yarns.  It is 100% cotton and really has a nice feel to it in the ball.  It's definitely not your "sugar and cream"-type craft store cotton.  I can see myself using it for a baby sweater or something else worn next to the skin, and I couldn't resist the tonal colorway.  That's usually not seen very often in cotton yarns.  I was happy to see that this yarn is also highly rated by Ravelry users! 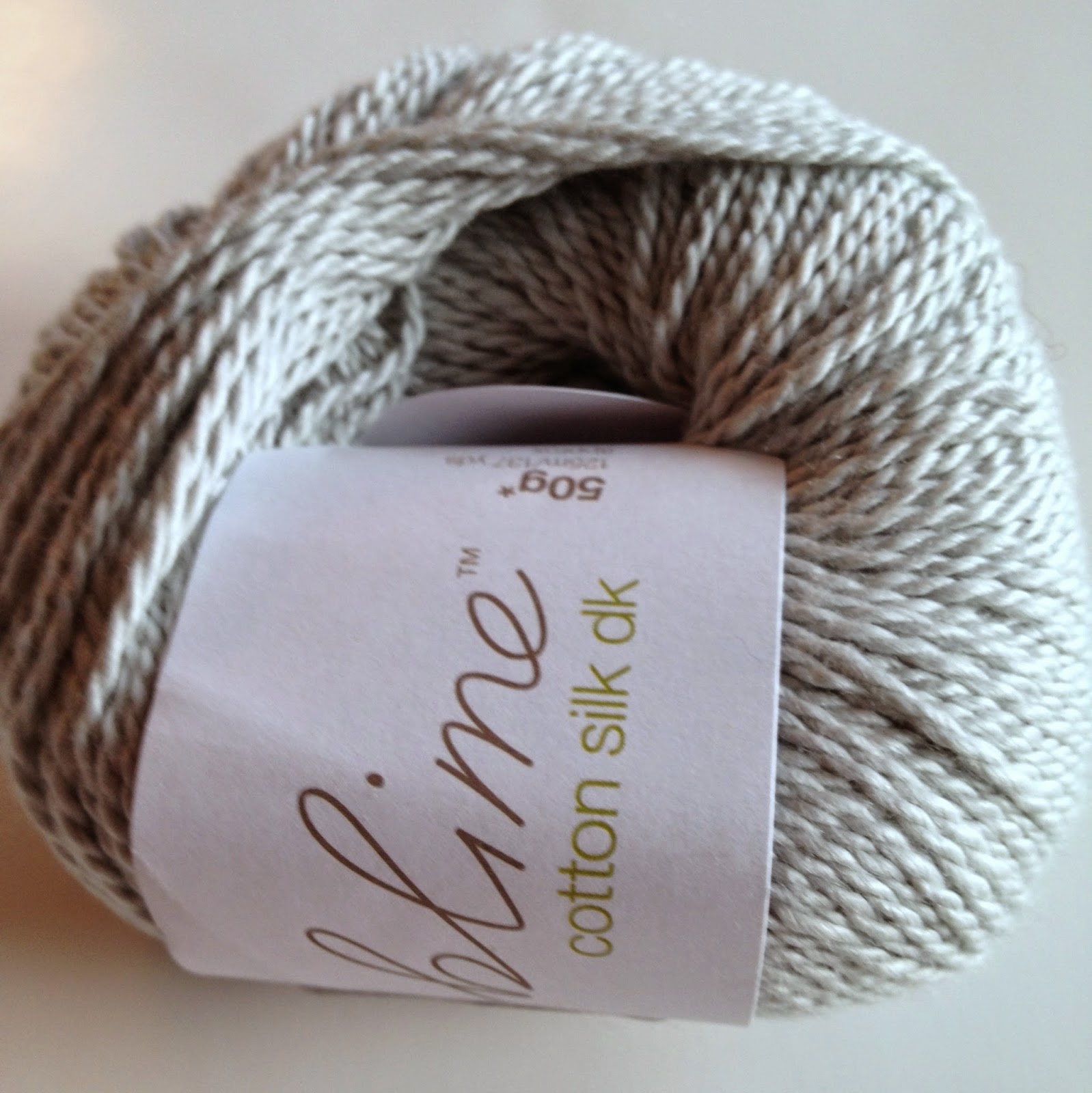 The other new type was "Cotton Silk DK" from Sublime.  I bought small quantities of both the Mesa and the Sublime since I had no idea what I'd be using it for.  I just wanted enough to use for swatching so I could play with it and figure out if it would be right for whatever project ideas might come up in the future.  I picked a natural linen-type color, but the Cotton Silk DK had a nice array of colors to choose from.  I'm pretty sure this is a new yarn since it only has one user rating on Ravelry and only 10 people have it listed in their stash.

I rounded out my haul with a new Size 4, 40" Chiaogoo circular needle.  I have a set of Knit Picks interchangeable needles that I like quite a lot, but I have to admit, I like the feel of the one Chiaogoo needle that I own even more.  It's a size 3, which is once size smaller than my interchangeables run.  I like it so much, in fact, that I tend to knit more projects with a size 3 needle than I probably should.  My Knit Picks Size 4 needle has been used so much that the nickel coating has started to wear off on one of the needles, so I thought I'd replace that with another Chiaogoo needle (even though Knit Picks has a lifetime guarantee on needles, I just haven't gotten around to exchanging it).  If you're still working with craft-store-type needles, I could highly recommend either the Knit Picks nickel-plated or the stainless steel Chiaogoo needles with the red cables.  Both have a really nice feel to them, and I promise, once you compare them to the Boye or Takumi Clover circulars that you can buy at places like WalMart or Michaels, I think you'll have a hard time going back to your old needles!

If you do visit String Theory Yarn Company, make sure to cross the railroad tracks and go up the street about a block to the Blackberry Market.  We stopped there to grab a snack for the ride home and both of us picked treats that were delicious!  My husband got a blueberry muffin that he said was fantastic.  Because of my lactose intolerance, I can't usually eat much in the way of baked goods when I'm away from home because they so often contain butter, milk, or other dairy products like sour cream or cream cheese.  But when I asked the cashier if there were any options available that might be ok for me, he pointed out a little rack of vegan cookies.  I'm always a little suspicious of vegan baked goods because I haven't had the pleasure of tasting many that are very good, so I grabbed two different types of cookies thinking that if one was terrible, maybe the other kind would be ok.  I ate the chocolate chip cookie on the way home and it was excellent.  So good, in fact, that I polished off the other one later that evening - a chocolate chip/oatmeal/dried fruit concoction, and I think it was even better than the plain chocolate chip!  Anyway, the Blackberry Market is a little cafe that also has baked goods, packaged snacks, and a few other doo-dads like jars of jam, bags of coffee...that type of thing.   I highly recommend it for any hungry knitters!
Posted by Nicole at 6:09 PM