Last night, we were clearing furniture out of our living room.  It's finally time to replace it.  We bought the two couches we currently have in 1997 and 1998.  One of them moved with us from a small apartment to the house we live in now.  They survived the first pair of well-behaved geriatric cats that were my childhood pets and who lived until our younger child was about 3.  But a couple years later we adopted two newborn kittens that were abandoned in the bushes at our church, and we were terrible at training them to not use the furniture as scratching posts.

But they're eight years old now and the time has finally come to replace our old, but overly-used furniture.  The only thing I was sad to see go is our enormous ottoman with a lot of storage on the inside.  For years, that has been the spot I put knitting projects that make without a purpose in mind.  Going through the ottoman last night, I managed to separate things into three categories: pattern samples that I need to keep, things I could offer for sale in my Etsy shop or give as gifts, and things that need to GO because they are complete knitting fails.

Usually, I like to cover this blog in beautiful pictures of projects that you might enjoy working on.  But today, the theme is "Nicole has Bad Knitting Days, too!"  And as someone who had her first knitting lesson just about 8 1/2 years ago, those first years of questionable projects are still in the recent enough past to come back and haunt me....or make me laugh.  (Mostly, they make me laugh.)  So enjoy taking a look at the Knitting Fails I came across....and maybe you can explain to me why I didn't just get rid of these things years ago??? 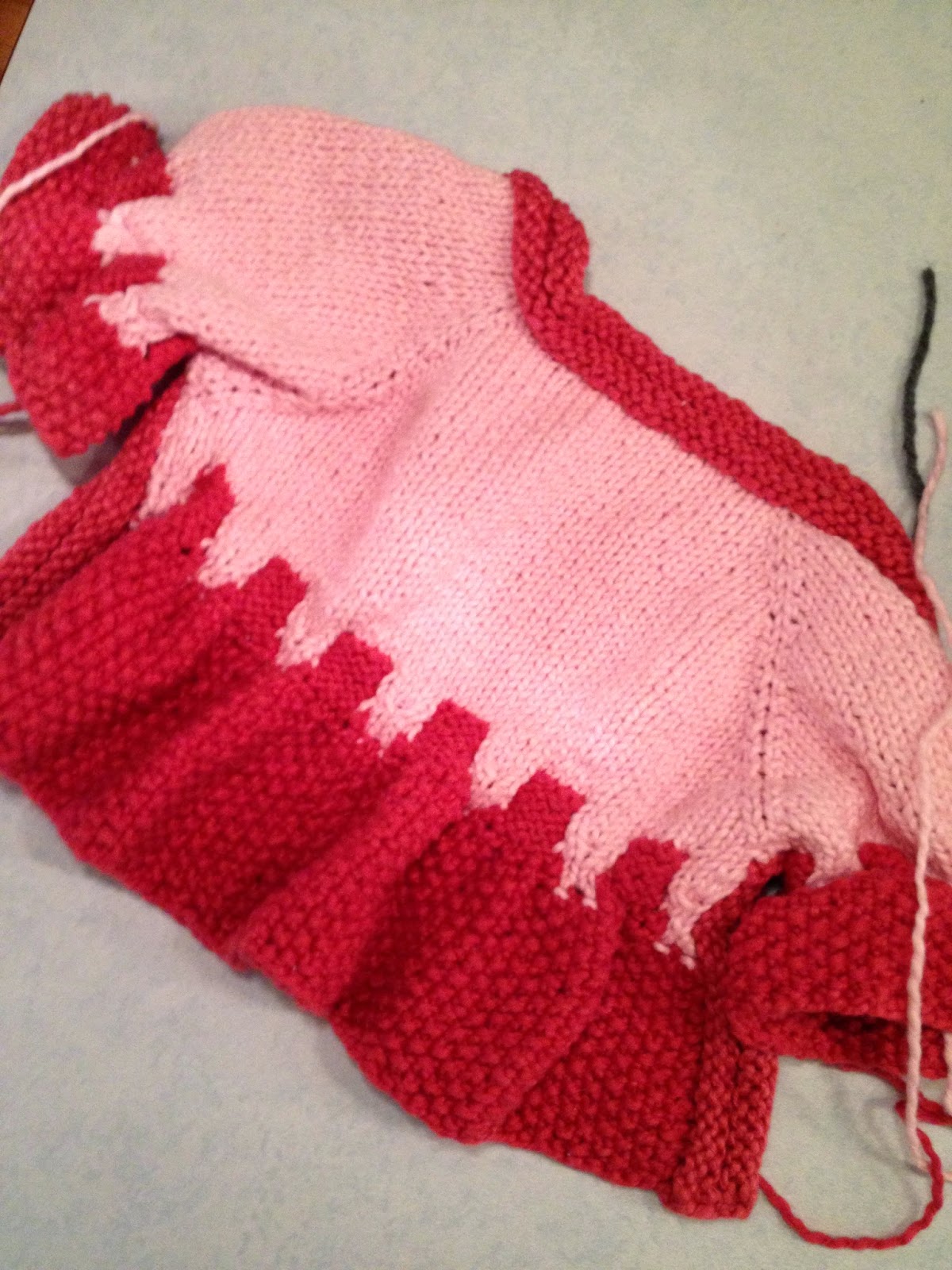 This comes from a pattern that actually results in an ADORABLE little sweater to go over a little girl's dress or sleeveless shirt.  By the time I made this monstrosity, I had already knit up maybe 3 or 4 of these little shrugs in a lovely bamboo yarn (Caron Naturally Spa yarn).  In my mind, I was going to take cute to new heights by using two colors of yarn to emphasize the pleats at the base of the sweater and the sleeves.  But the yarn I chose for this one (some sort of cotton disaster from Michael's) was too heavy for the needles I used, so it didn't drape nicely.  And I was new to carrying colors, so my floats were way too tight, which made the back pull together more than it should.  Blerg.

Here's a picture of what this sweet pattern should look like: 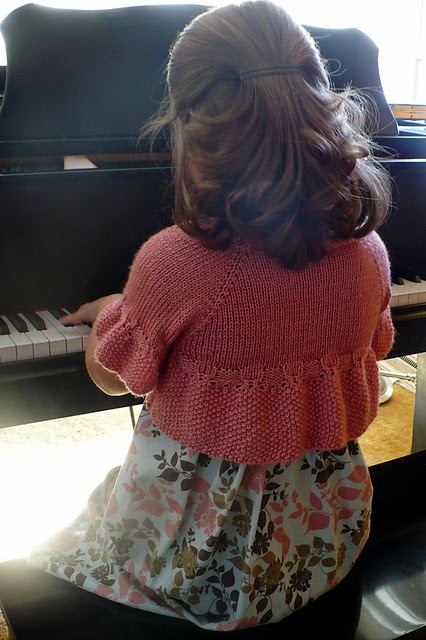 See?  It's not the pattern.  It was definitely just my terrible choice of yarn/the wrong gauge & my lack of colorwork skills! 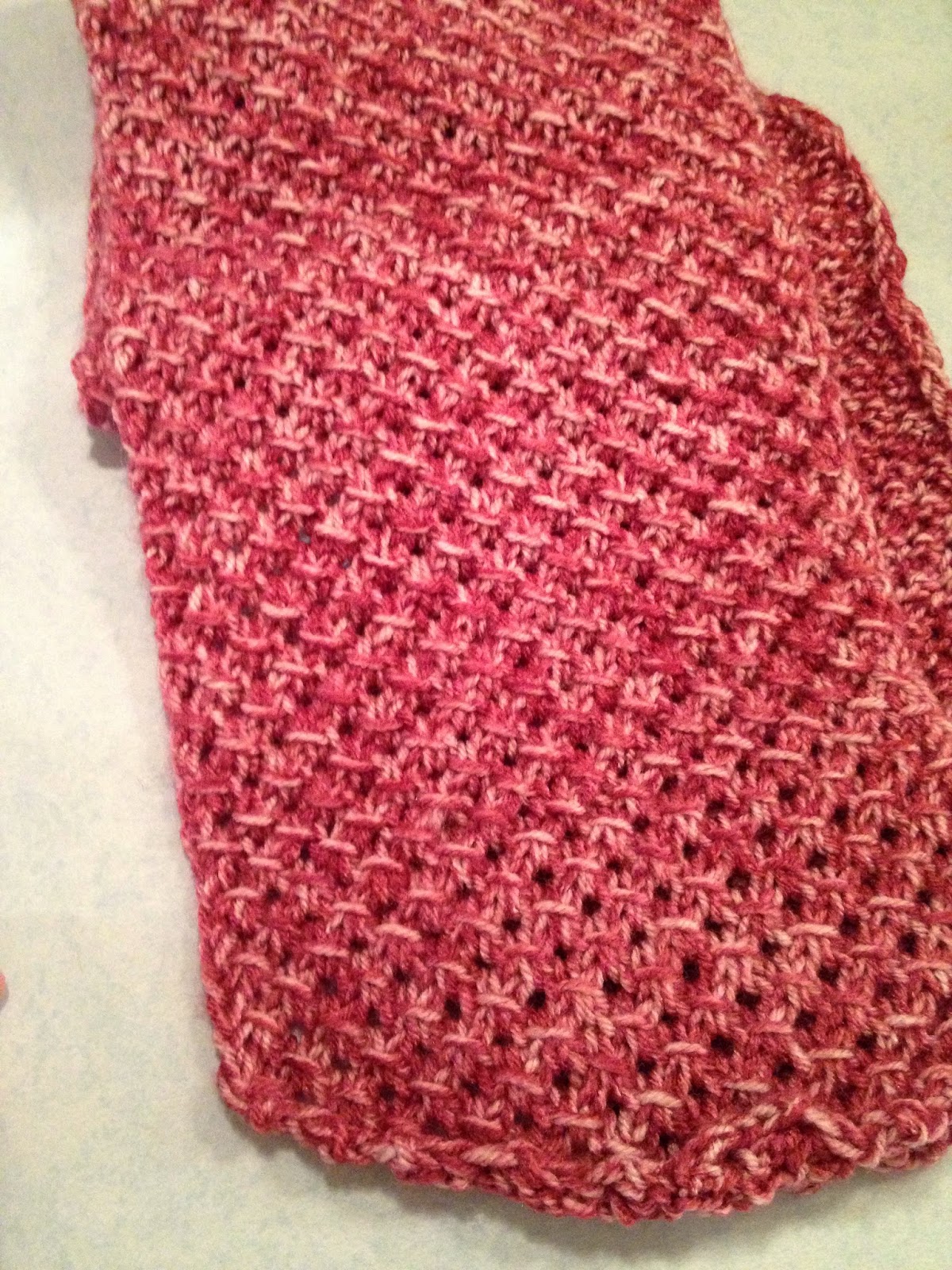 Next, we have a scarf that you may not immediately recognize as a knitting disaster if you didn't know what it was supposed to look like.  But if you had seen the photos from the pattern, you'd recognize that the yarn I chose for this was much heavier than what the pattern called for.  And although I could have gotten a better result if I had used appropriately-sized needles (which, obviously, I didn't), what I ended up with was a winter-weight scarf with a stitch pattern that is full of holes.  Maybe not the best possible combination.

Plus, the yarn I used here was some sort of acrylic nonsense, which does not block well when trying to show a lacy texture.  Yeah, I could probably "kill it" with an iron and get it to drape a little more, but the yarn itself is terrible and feels like itchy plastic.  I'm sure that what attracted me to it was the fact that it was a tonal colorway in a sea of solid Red Heart & Caron yarns (this was back in the day when I didn't know that there were alternatives to Michael's Craft Store!)

The good news is that I did eventually re-make this pattern in fingering-weight yarn.  The original pattern calls for lace weight, but I upped my needle size and came out with a project that I loved and wear regularly! 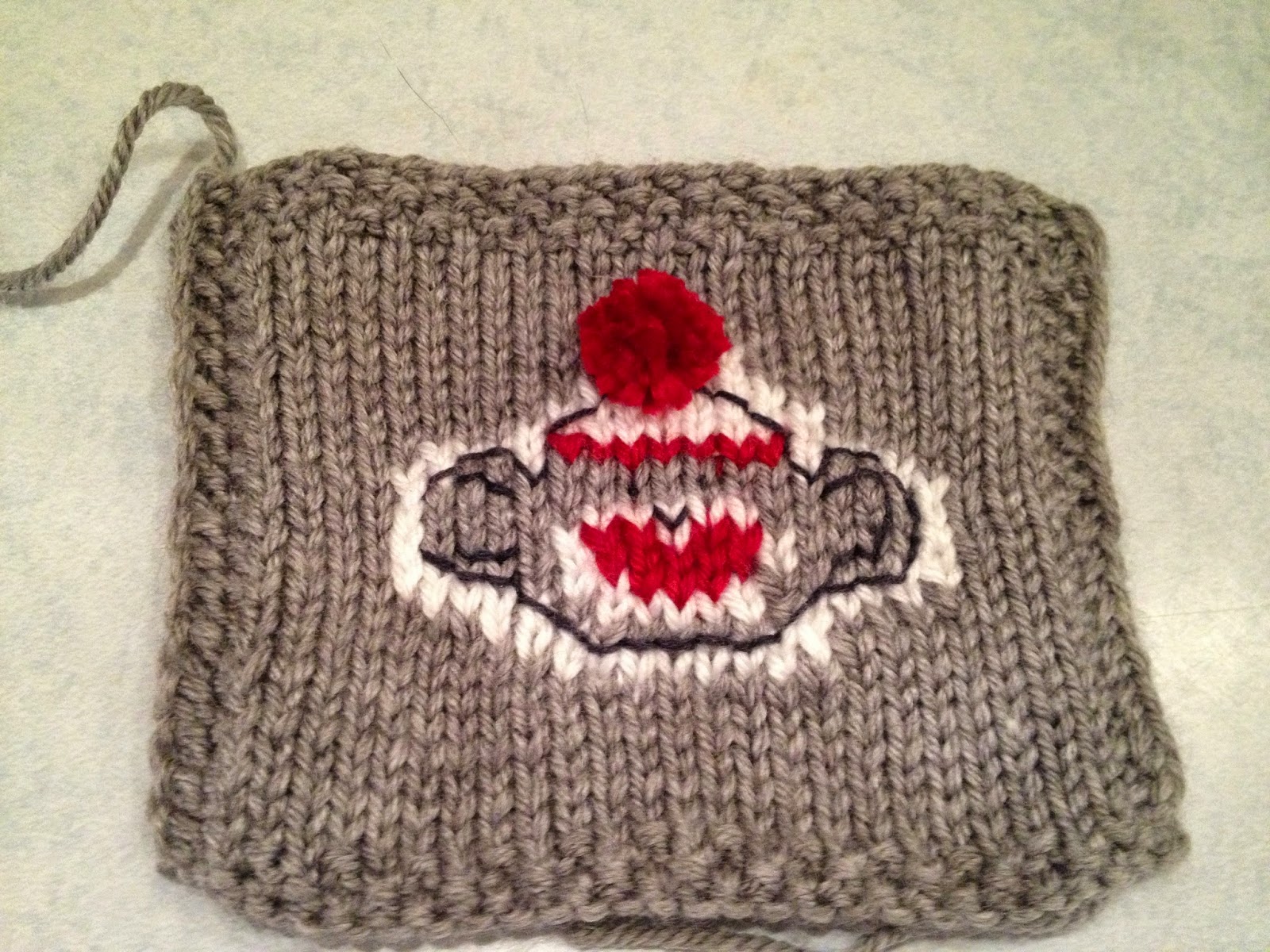 This little patch wasn't so much "knitting gone wrong" as "I'm not sure what I want here".  I had had a number of requests to design a child's sweater that would go with the sock monkey hat pattern I already had published.  I'm not really one for super-kitchy style, so it took me a while to figure out how to do a sock monkey sweater without making it over-the-top.  I decided on a raglan sweater that had a layered look to the sleeves that would just have a little sock monkey face in the middle of the chest.  Personally, I was all for knitting the sweater in one color, then double-stitching that face right on.  But I wasn't sure if other people would love the double-stitching as much as I did.  So I came up with a pattern that gave people a choice: either double-stitch the face on, or knit a little intarsia square that has the face knit into it, then sew the square on to the sweater. 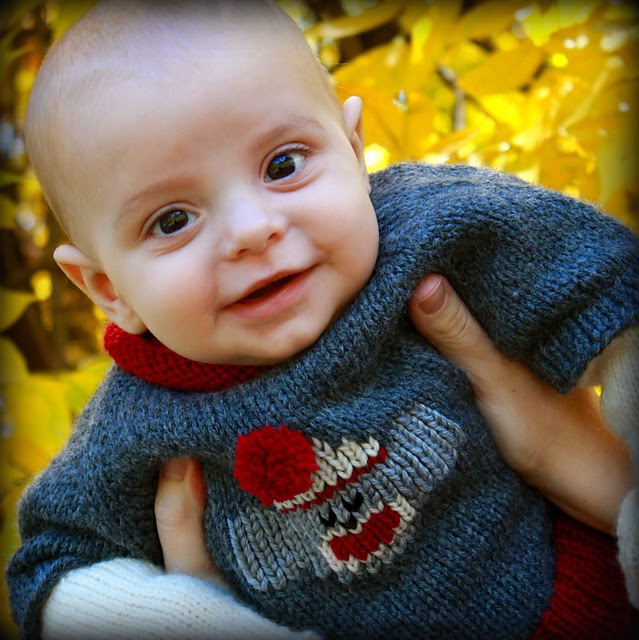 In the end, I could have probably just saved myself the trouble because as I look at the project pages posted on Ravelry, only one sweater posted used the intarsia square.  The rest of the sweaters have adorable little faces double-stitched right in the center of them! 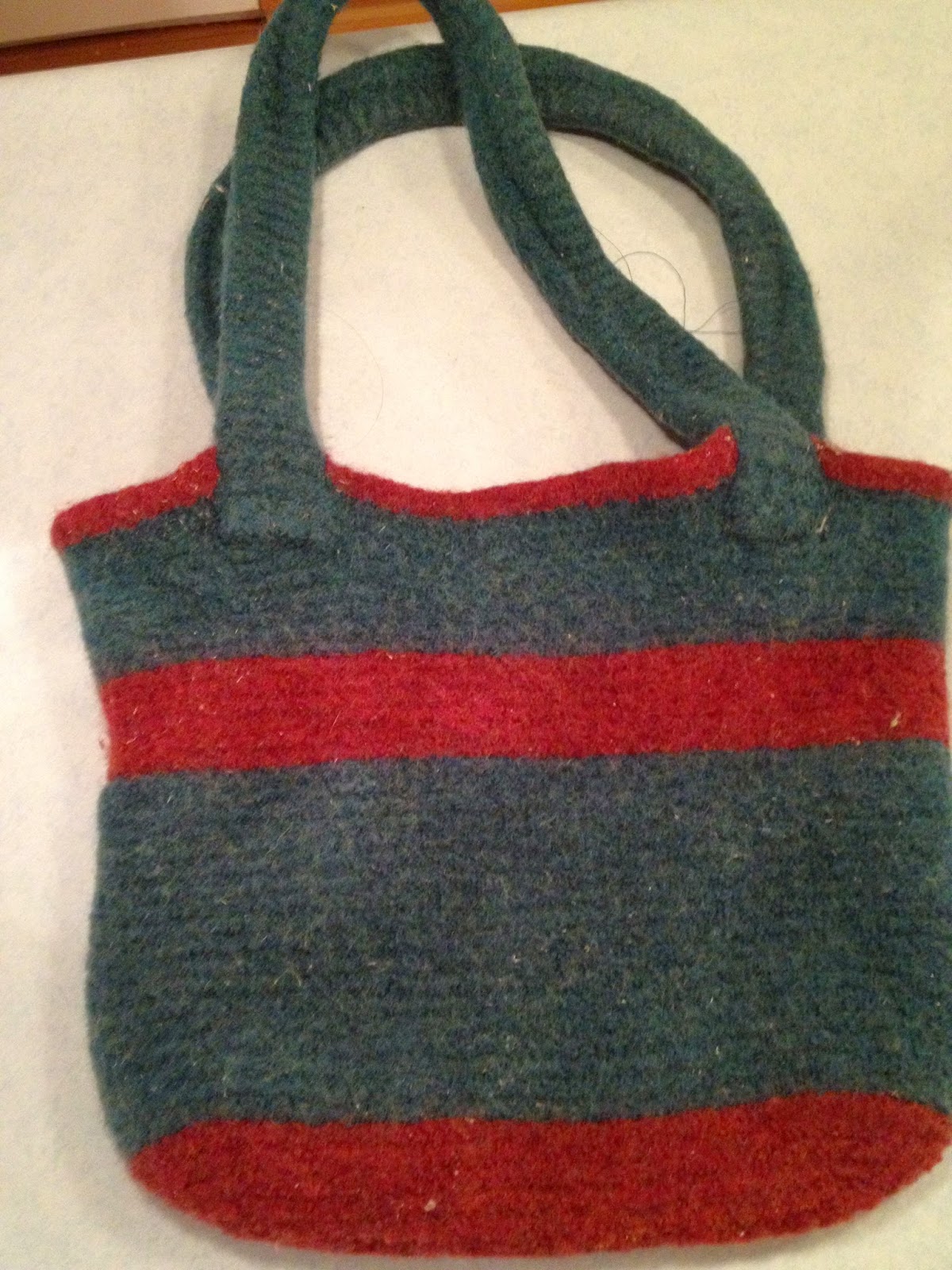 My husband pulled this out of my "pitch it pile" and wanted to to know why this bag was a knitting fail.  The bag itself is fine.  It's nothing fantastic, and I don't know what I would use it for, but it just doesn't really float my boat.  But the handles that I felted along with it are terrible.  They are puffy, round, the wrong length for putting over your shoulder, and super uncomfortable.  I love a big bag with a nice handles that will stay on your shoulder.  I do not love a mis-shapen "blah" felted bag with puffy handles.

I have no idea why I made this bag.  I'm thinking it must have been a pre-cursor to my Knit Purl project bag....maybe I was trying to get the shaping right?  Or maybe I didn't know what I wanted to do with the handles yet?  Whatever it was, it was a dark day for knitting. 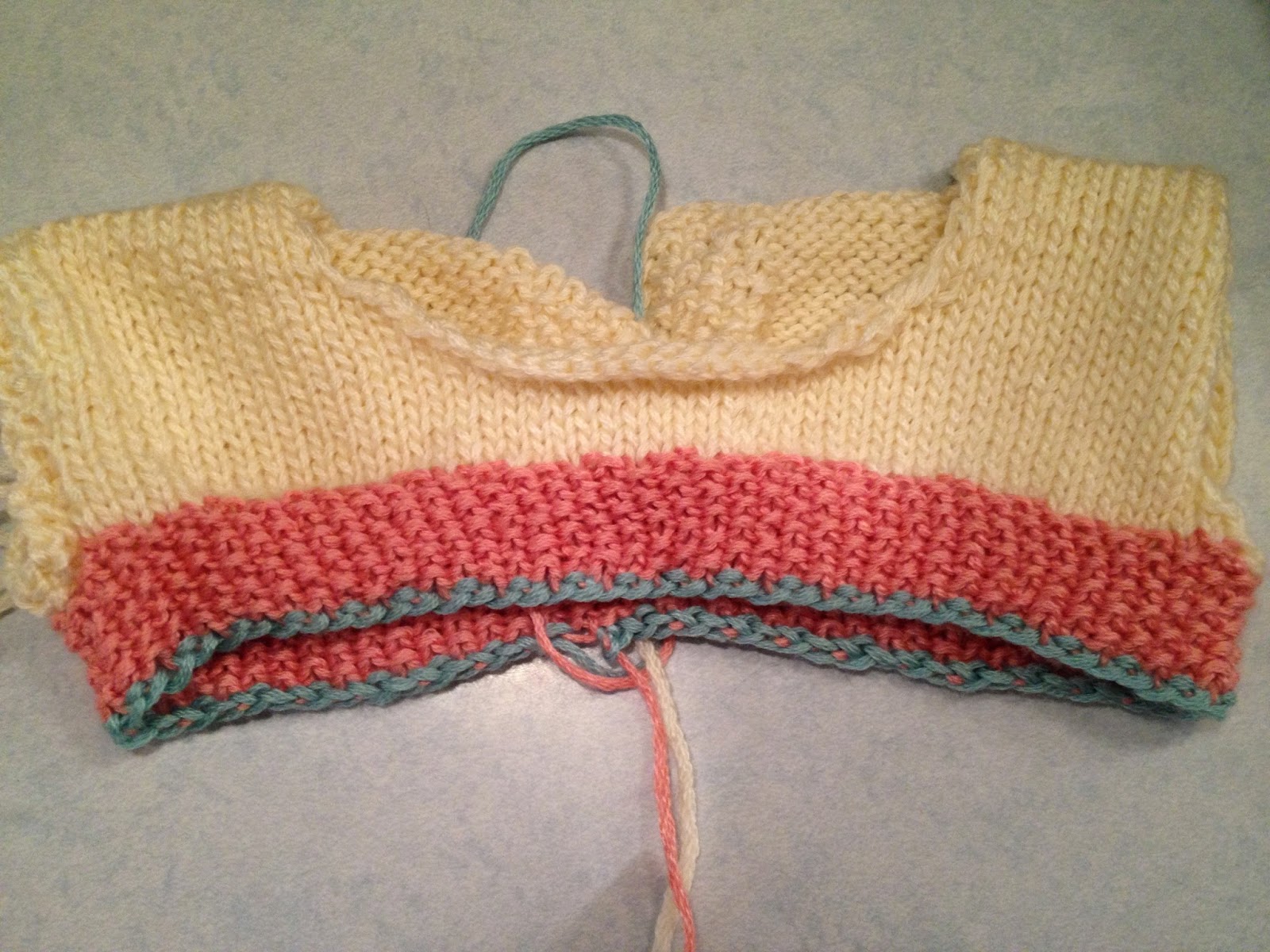 This one fall into the category of "on the right track, but didn't quite get there".  I was figuring out the Sadie Baby Dress design.  A friend of mine has a daughter named Sadie, who was 2 or 3 at the time.  This friend was the person who taught me to knit.  She had asked me if I would let her pay me to make a dress for her daughter (ironically, the friend who taught me how to knit didn't really knit herself.  She knows the basics, but I quickly took off from there, and she knew I was just starting to design at this point.)  So I took her up on it.  She described the type of simple, empire-waist dress she had in mind, and I made a sketch to show her what I was planning.  Once the idea was on paper, I set to work trying to create it with sticks & string. 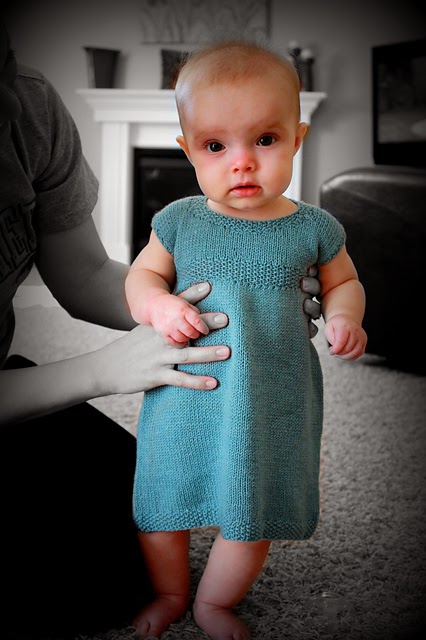 I went with a dolman sleeve for it's ease & simplicity, and decided to start at the waist because I thought it would be nice, on such a small project, to be able to complete the bodice first (the part where you actually have to pay attention and do things), then have the super-easy skirt as the final part.  More importantly, it would allow people who don't want to buy extra yarn to just knit that skirt until they run out, and the dress could just be whatever length it was.  (Another thought at the back of my mind was that if people wanted to make a knit bodice to sew a fabric skirt to, they could use this pattern for that type of project as well.)

Well, not everyone was excited about that design choice.  Project pages for this dress are full of comments like "why isn't this a bottom-up design?" and "so unnecessarily complicated!"  I don't worry about it too much because, in my past life as a teacher,  I quickly learned long ago that you can't please everyone.  (And also, what's so hard about just knitting it as a bottom-up design if that's what you really want to do?  What's with the complaining?)   But I mention this because sometimes I knit patterns from other designers and think, "Now why did she choose this construction?"  "Why did he use this type of increase rather than this other type of increase that I prefer?"  "Why does she want me to bind off on the WS rather than the RS?"  But I usually stick with the instructions and find out a little farther down the line that there was a reason the pattern was written the way it was.  After all, I buy patterns because I don't want to have to go through the figuring out, the trial & error, and everything that goes into creating a pattern from scratch.  So I'd be silly to abandon that ship and decide that I know better than the person who spent all that time creating the pattern I'm knitting!

So this first little bodice wasn't so much a knitting disaster as a first step on the path to creating a pretty cute little baby dress.   The owner of my LYS will watch me rip something back for the 5th time and just laugh.  She knows I'm a quick knitter and am always willing to just redo something if it's not coming out right, but it still makes her cringe to see me destroy work that will take hours to fix.  But that's what you have to be willing to do if you want to create new patterns.  Since Sadie was an early pattern for me, I might have re-knit that bodice 10 times before I had it exactly right.  But that was what I need to do in order to learn.  It's no coincidence that my earlier patterns are mostly children's clothes - it often took a few tries to get each garment just how I wanted it, so I knew I would be able to better manage my time if learned my craft on children's garments rather than adult-size.  I'm thankful that I can do most of the design work with swatches & a calculator now, but when I'm doing something that uses a new construction, I might still knit more than one sample, just to tweak things a little bit.  I'm currently working on a shawl that I knit twice because I wasn't sure if I wanted it to be worked side-to-side or as a separate border with picked-up stitches that create a short-row shawl.  Once I could compare them side-by-side, the second way won out (with some help from fans of my Facebook business page!) and I'll be re-knitting the sample for a third time to create the shawl I will actually be using for my pattern photos.  It's all part of the gig....good thing I really enjoy knitting!
Posted by Nicole at 8:39 AM