The Dress That Nearly Ended Me 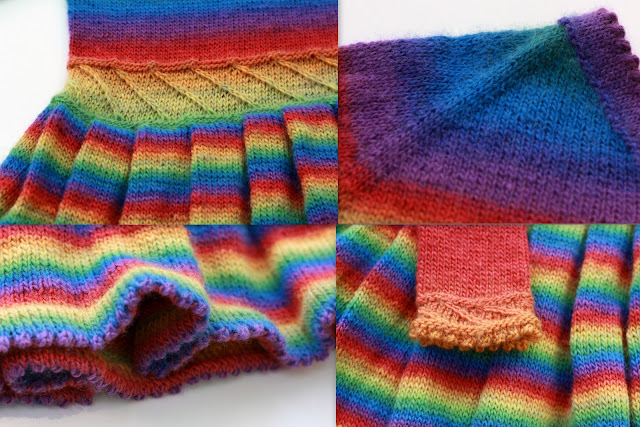 I don't mean to alarm anyone, but this dress was almost the death of me.

I don't mean to say that I dislike this dress - I actually like it quite a lot.  But a week ago, I thought I would die before I finished writing the pattern for it.

If I had learned my lesson by now, I would have taken perfectly written notes, in order, and crossed out or erased any pattern notes that went with my first or second attempts to this dress.  Because those extra notes could really make things confusing if I forgot which attempt each note was referring to.

But I have not learned my lesson (or, I hadn't then.  I certainly have now!)  My notes were written all over the place, not particularly in order or in much of an organized way.  If I had been writing the pattern right after I finished knitting the sample, it would have been fine.  I would have remembered which parts were the "real" parts and what I meant when I scribbled little partial phrases.

But I just wrote the pattern this week and last.  And those notes?  They were written up in March or April.  Then I got distracted by the other pretty things that were trying to get out of my head.  And I kept telling myself that Knit Picks wasn't expecting this dress pattern until the fall, so it was totally cool if I got sidetracked for a couple months and came back to this later.  And it would have been....if I had written reasonably complete notes.

I learned my lesson the hard way while reverse-engineering the sample garment I made in the spring.  Once I did that I could tell which of my notes to pay attention to and which were left over from prior attempts, but man, I do not want to have to do that again!

Miraculously, my sample even fits my little model just right, so we have big plans to go out on a little photo shoot as soon as the temperature drops below 80 degrees.  We've had temps in the upper 90's - 100 degrees for the better part of the last month, so I'm not getting my hopes up that we're going to cool off any time soon, but it'll happen.  We'll have at least one cool day before the end of September when I need to get this pattern submitted to the yarn company!  (Please?  Pretty please?)

Anyway, if you enjoy testing new patterns (you get the pattern for free in exchange for giving feedback) the testing thread can be found here.
Posted by Nicole at 10:00 PM