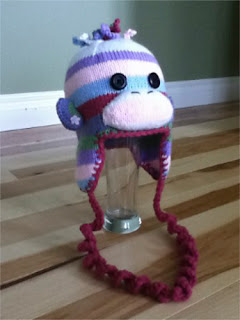 One of the things I love most is the fact that after I publish a pattern, there are all sorts of creative knitters who work their magic and put personal touches on their work that I never would have imagined.  No where in my catalog of patterns is this more obvious than when people use my Sock Monkey Ear Flap Hat pattern as the base for their own magical creations.  I thought I'd do a post today that featured some great variation that are (mostly) not my own!

Kelly, knitter extraordinaire from Canada, made this first adorable little girlie monkey.  She added little corkscrew i-cords for "hair" and ties and put tiny little flower earrings.  (How cute is that?)  I saw that little monkey project go up on Ravelry and knew we were two peas in a pod. 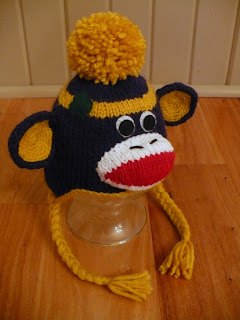 Sticking with the theme of "sock monkey with a twist", my friend Nicole asked me to make a sock monkey hat for a friend who was having a baby.  She mentioned that the parents either attended Notre Dame, or followed the sports teams there, so she wanted to tie in the school colors somehow.  So I knit her a monkey in navy blue with a gold stripe and cut a little green clover out of felt that I sewed on to the hat.  I think this may be my favorite sock monkey hat that I've ever made.  (And I've personally probably made between 70-90 of them.  I lost count a long time ago!) 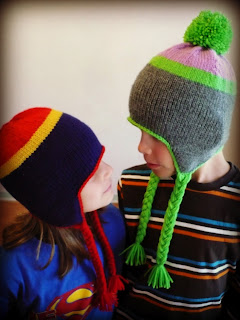 Another way to go if you have high school/ college/ professional sports team colors that you like to wear, and you feel like you're a little too old to be wearing hats with faces, is to do something like this:

Just pick two or three colors and knit the hat up plain.  It's a nicely-fitting hat (as long as you use appropriately-sized yarn & needles that allow you to get gauge!) and is very wearable by people of all ages when done up this way! 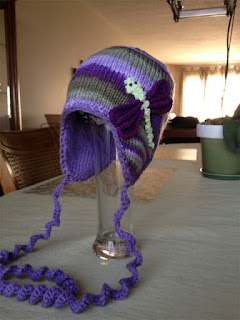 I love this next example for girls of any age.  It's from Kelly again...you probably suspected since it has her signature curly ties.  :)  She knit the hat up with stripes and did a double layer for warmth just around the ears & forehead area, then did this darling dragonfly (it's a combination of knitting & crochet) as a decorative touch.  I would totally wear that. 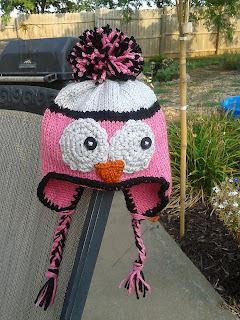 I completely missed the Owl Bandwagon, but Cathy from Kansas figured out a way to transform a monkey hat into an owl hat!  She crocheted big owl eyes and knitted a little beak to put together for this little face.  Then she used two colors to jazz up the pom pom and the ties.  What a hoot! :)

Until I sat down to write this post, the lion hat that Jean had posted on my Facebook page had slipped my mind, and since I forgot to ask for her permission to steal the picture for the blog, I thought I'd like you to the Facebook picture instead.  Behold, Jean's Little Lion Hat! 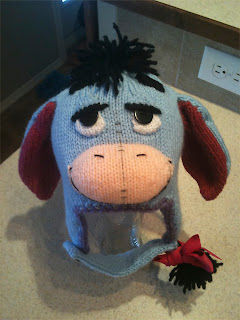 If I was giving out prizes though, I'd have to give it up to Kelly, because, honestly, can you even believe that this Eeyore hat is even loosely based on the sock monkey hat?  I'm sure it took a couple tries to figure out how to get those ears exactly the right shape, and can you believe how perfect all the other features are?  Those droopy, sad eyes?  The little shock of black hair?  Even the way she stitched right down the middle of the face is spot on.  She even figured out a way to incorporate Eeyore's little tail into a hat pattern.  Brilliant.  I would have suggested she publish it as a separate pattern if it weren't for that whole "selling things based on other people's copyrighted characters" thing.  So, I'm sorry to be the meanie that is dangling something in front of you that doesn't have a written pattern.  But, it just goes to show what a knitter can do with a basic pattern and a little ingenuity!
Posted by Nicole at 11:49 AM