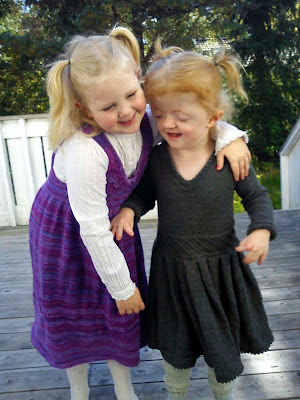 One of the many things I love about being a designer is the social aspect of it.  I love meeting and talking to other knitters.  I have really been enjoying the knit nights I have been going to at my LYS.  I have established internet friendships with a couple people who I would jump at the chance to get together with if we ever had the opportunity to be within a hundred miles of each other, and I have corresponded with a number of other crafty souls, mostly through the on-line Ravelry community.

Some of the most special souls are people who volunteer to test knit.  I think that some people enjoy getting to see new designs before they're available to the public.  Some people enjoy the challenge of knitting something new that might have a few mistakes for them to catch.  And I'm sure some people probably enjoy the test itself, as it is typically done in an on-line forum where a number of other people are working on the same design and you can all chat and compare notes.

One person I've 'met' through test knitting is Kreativia.  She a Norwegian mum with a number of kids to knit for who worked on both my Charlotte Dress test and just finished up her test for my Munchkin Dress (coming soon!)  She had posted a couple peeks along the way, and the yarn she chose (Drops Baby Merino) was knitting up beautifully.  I think her dress came out looking like something you could only find at a high-end boutique (if you could even find it there.)

And how big a smile do you think was on my face when I saw this charming photo that she posted of her two daughters - one still wearing the Charlotte Dress more than a year after she originally knit it, and the other wearing her brand new Munchkin Dress and legwarmers?  Yeah, that's right.  A really big one.

Those two kiddos look like they have a lot of fun together!

Kreativia, if I'm ever in Norway, I'm totally tracking you down and inviting you to come and join me for a drink and a couple hours of knitting!
Posted by Nicole at 5:46 PM