The "Purp Hat" finally found a new name!  "Purp Hat" had totally grown on me, but since my sample hat ended up being pink, I figured the joke might get lost in there.  So "Twisted Hipster" it is!

It's a fun hat.  This one (size large) took me one day to make.  It was maybe 6 hours of knitting total...but that was without having to swatch (I have already worked with this yarn & needle size, so I knew what to expect) and since it was the third time I had knitted the pattern, I was very familiar with the stitch pattern.  So for other folks, I'd probably say this is an 8 - 10 hour hat.
I had about a half hour between the time I finished the hat and the time I was planning to leave the house to go to "Knit Night" at my LYS.  So I jazzed myself up and ran outside to take pictures. 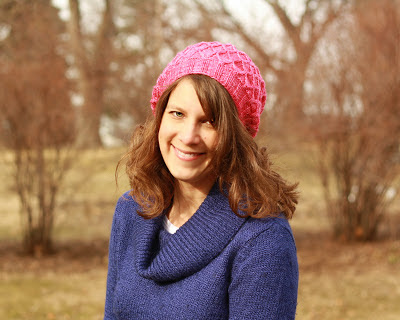 It's just as well that I had to hurry, because it was in the mid 20's with an even colder breeze here yesterday afternoon! 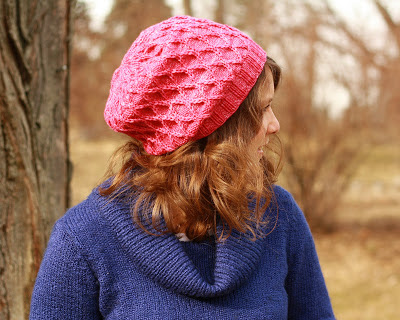 I always find photographing hats a little challenging.  In general, I like faces in my modeled shots.  (There's no photo worse than shots where a model has his or her head chopped off as if they were a dress dummy.)  But, if you're seeing a model's full face, then you're not seeing much of the hat.  Exhibit A: The photo is fine, but since it's taken straight-on, you can barely see an entire repeat of the stitch pattern on the very top of the hat.  And although the ribbed band is lovely, you probably want to know what's going to happen after that!

So, I am much happier with shots like Exhibit B here: the 3/4 turned away shot.  Still a face, but you are seeing way more hat than face. 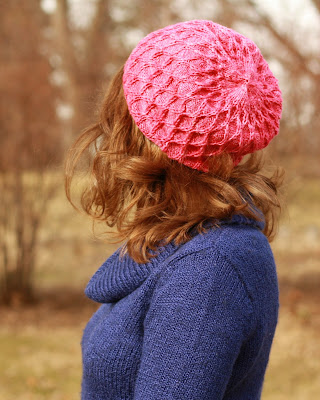 And just for good measure, we always need to throw in some shots of the back of the hat.  You know...make sure those decreases look nice and there are no funky lumps or bumps happening in the decrease section!


The plan is to release this one early next week.  And if you like free stuff, make sure to check back on the blog next week because I'm going to be doing a give-away to celebrate this release!
Posted by Nicole at 6:02 PM