It's May 1st, which means it's the first day of the first knit-along I've ever hosted!  (Well, aside from test-knits, which, at their very best, can really be a lot like a knit-along.)  But this is the first OFFICIAL knit-along that I've hosted.

I had these grand plans that I'd get my swatching done in April so I'd be ready to cast-on my new Leap of Faith sweater on May 1st.  But, alas, as often happens, life got crazy just as I had a giant to-do list, and swatching was not a "must do" priority.  Unfortunately, the blog wasn't either, as you can probably tell from my recent absence!  The last couple weeks gave me a long list of curve balls, only the tip of the iceberg were water in the basement and personal identity theft.  Seriously, buy about halfway through our two weeks of crazy, I told my husband I just wanted to stay in bed the next day.  I was afraid to find out what was going to go wrong next!

But things have worked out as well as they could, and I'm a little less overwhelmed by regular life stuff, so I have been doing a little more knitting over the last few days.  I actually got to attend a knitting retreat this past weekend, which I'll blog about soon.  But today, my main goal was to get my swatch done for my KAL sweater!

Behold: The Yarn of Awesomeness: 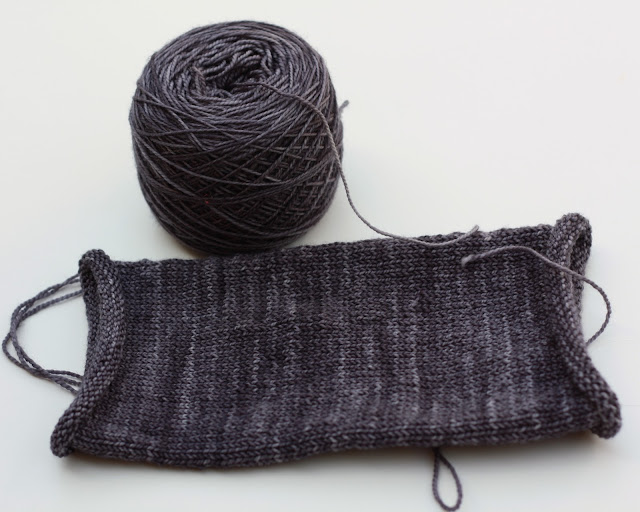 It appears that I have a problem with blue.  I tend to always go for the color when I'm picking out yarn. And I wouldn't even say it's my favorite color.  (Usually purple has that distinction....but I rarely pick purple yarn.)  But I bet if I went through my stash right now, at least 25% of my yarn is either blue or a variegated mix of colors that has a lot of blue in it.  But because I pretty much live in jeans, I don't always love wearing blue sweaters.  It's a little too monochromatic for my taste and I get a little tired of all blue.  So I really wanted to make a neutral sweater that I could throw on over one of my brightly colored t-shirts or almost anything really....enter madelinetosh sock yarn in composition book grey.

I love the Three Irish Girls yarn I used for my sample sweater, but it has gotten a little fuzzy as I've worn this sweater over the past 9 months.  Not too fuzzy to wear at all, but just a little "not new" looking.  On the other hand, the Tiny Dancer sweater that I made almost a year ago, and have worn at least as much, looks almost brand-new.  There are a few little pills under the arms, but they are very easily removed, and the yarn itself does not have the slightest bit of a "fuzzy look".  If I was stranded on a desert island and could only have one yarn with me, I'd find it difficult to find something I liked better than Tosh Sock.

I thought the madelinetosh was a slightly heavier sock yarn than the Three Irish Girls though, so I thought I might need to go down a needle size.  I started my swatch with a size 3 (as I used for the original Leap), then went down to a 2, and finally down to a 1.  The 1 was obviously too small once I finished that section, but the 2 and 3 were really close.  I measured the 3 gauges before I washed the swatch and it looks like the #3 needles are actually going to be the right size to use again.  So, note to self: madtosh and Adorn Sock knit up pretty much exactly the same!

So tonight I'll let my swatch dry, and tomorrow I cast on!  If you intended on joining us but haven't gotten around to actually signing up, head on over to the KAL thread and say "hi"!