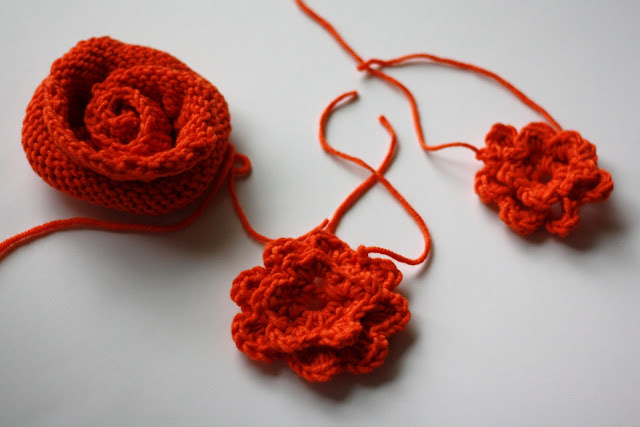 It's always been my intention to learn to crochet.  There are some things that I love in knit fabric, but there are some things that just look best in crochet.  One of these things, I've found, is flowers.  Ever since I wrote the blog post about the headband I was working on, I've been experimenting with different ways to knit flowers.  And I am the first to say that they just don't look great.  Behold, the flower on the far left is knit.  Gross, right?  Yeah, I agree.

On the other hand, the two other flowers in the photo are crocheted.  And they actually look like flowers!  Here's the problem: I crocheted them "by ear", meaning, I really have no earthly concept as to how to write a pattern for what I did.  I know that I used slip-stitches, single crochet, and double-crochet stitches, and "chains", but that's it.  I have no idea how one tells someone to "go into that hole...you know, the one that's to the right of your slipknot"?  That doesn't seem like professional pattern writing to me.

So I have a dilemma: I have a finished headband and I have flowers I like to use with it.  But I do not have the crochet knowledge to write the pattern.  Solution: read some crochet books this summer and figure out the language for crochet patterns.  It won't give me the skills I need to be a crochet designer, but I probably can learn enough to write a simple pattern for a flower that is accurate enough to send it to a tech editor who can make sure I don't have anything too crazy in there.

So, it'll delay this particular design, but that's ok.  It'll just be a long, dry summer for patterns here at Trappings and Trinkets.  I promise you though....I have one in the works that will knock your socks off when I release it this fall!