I Am Not THIS Crazy of a Cat Lady

My family occasionally likes to call me the "Crazy Cat Lady".  They mean it in the nicest way possible...I just happen to be someone who puts up with a lot of craziness from my pets that apparently most people wouldn't put up with.

We've had our current pair of cats for about 5 years now.  Sidenote: I don't like having single cats.  I think they would be lonely without each other, even though our boy cat mostly just menaces his sister, and she backs away growling with her ears flattened whenever he's around.  So clearly I base my opinion here on something other than reality.

Anyway, these two cats kind of fell into our lives unexpectedly.  I was not looking for pets.  I went to our church one day to reserve the chapel for my yearly student piano recital, and when I walked it, the church secretary had two little balls of fur in her lap.  These two kittens were not yet a week old.  Their eyes were still closed and each one easily fit into the palm of your hand.  I squealed and asked if I could hold them.

As it turned out, some of the church preschool children had heard these two kittens crying in the bushes in front of the church that morning.  The mama cat was a stray and (we would later learn), some well-intentioned people had taken her home with them a couple days before, not knowing that she had two babies that needed her in the bushes.  It was actually quite amazing that they survived at all - a couple days without any nourishment, in early spring weather.  The vet told me not to get too attached, because she knew that kittens taken away from their mothers this early didn't always thrive.

Whoops, I skipped ahead.  Anyway, at the time, my kids were 4 and 7.  I wasn't looking to take on a labor-intensive pet situation, but the church secretary was allergic to cats and she didn't know who was going to take these two kittens.  Our last pair of cats, which had been with me since I was 10 years old, had been gone a couple years by this time.  I always enjoy having cats around, and I wanted my kids to have the experience of having pets as well.  I felt like I was in a position of being able to nurse these kittens, even though it meant middle of the night bottle feedings of kitten formula (and convincing my husband to help me out with said feedings) for at least a month.  It meant keeping a heated bag of rice in their box so they stayed warm (their food won't digest properly if they get cold), and it meant using a washcloth to clean their little bottoms the way their mama would because that's the mechanism that gets them to go to the bathroom.   It meant teaching the kittens to use a litter box and teaching them to recognize cat food as something that goes in their mouth (that was much more difficult than I expected!)    I didn't understand the full scope at the time, which is probably good because it seems overwhelming now that I write it all out like that!

But my husband agreed and we took the kittens home, had that vet appointment where she told us not to get our hopes up and I inwardly rolled my eyes at her because I knew that any kittens that can survive alone in the bushes when they are just a few days old are tough little critters.

And I guess that's why I put up with a lot from these two.  They didn't have a cat mama to teach them the ropes, and I did the best I could.  So I forgave them when they pooped in the bathtub whenever we were out of the house "too long" (thank goodness that only lasted for about 6 months!)  I thought it was cute when they were so eager for my attention that they literally climbed up my pant leg to my waist.  (Cute when they were tiny, but we had to break that habit real fast when they got bigger!)  I still forgive my male cat when he stalks me in the morning, leaning in close to my face and poking my forehead with his paw before darting off the bed (because he has learned what my sleepy reaction to him doing this is!)

And so when my family sees silly cat-related stuff, they think of me.  My sister once bought me a Crazy Cat Lady action figure set.  It's still in pristine condition....not sure what I'm saving it for, but I'm convinced that it will come in handy some day! 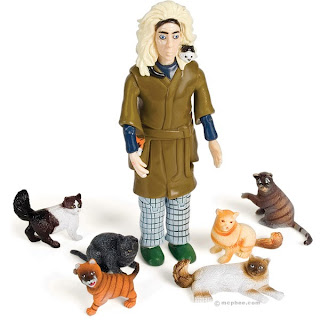 And recently, when my husband came across a picture of this mer-cat on the web, he announced "This should be your next knitting project!" 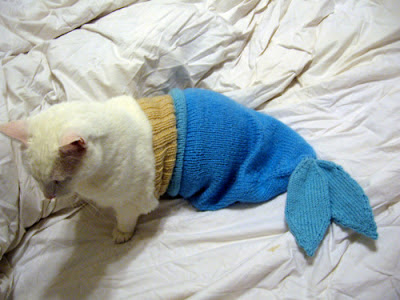 I know there are people out there who consider knitting a mermaid's tail and putting in on your cat some sort of animal torture, but I think that if I was so inclined, I could make the case that it's just payback for the months of poop in the bathtub and years of being poked in the forehead while dead asleep.  And I still think the cat would have the better end of the deal!