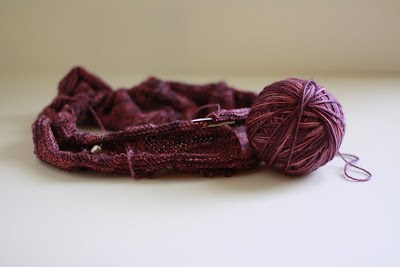 Things have been clipping right along here in the workshop.  I finished a long-term project last night.  It has actually been sitting around for 2 months waiting for me to put a neckline on it, but for a number of boring reasons, it took me until last night to get it finished.  Now, all I have to do is finish writing the pattern and get the test started.  I won't be able to take modeled pictures until late in the summer because I'm waiting for my little model to grow just a bit more!  (I originally made it for another child, but that didn't work out, so rather than frogging and modifying the size, I'm just going to wait for another child to grow.  That's not lazy, is it?)

Now that I'm done with that project, I've started on something else. This one (finally!) is a top for me.  I've held off from doing adult garments until now because I felt like I still had so much to learn.  So it was much more manageable to practice new techniques and perfect my grading skills on smaller child's garments than it was to take the risk with larger things.  But I have an idea that I really love and I think my skills are there, so I'm jumping into the world of women's garments.

I had two skeins of Madeline Tosh sock yarn in the hollyhock colorway that I've been petting for months now, so I knew exactly what I wanted to make it out of.  I ordered 3 more skeins from The Loopy Ewe yesterday so I know I'll have plenty.  I think I might be able to do my size using every last bit of 3 skeins, but I'd rather have the extra just in case.  And if I have enough extra, I'll make a kid version so my daughter can have one as well.

Stay tuned....this project might take a while, but I'll post updates as it progresses.  My hope is to have it testing in July & August so I can release it in September....but I think that's pretty optimistic.  But, never say never, right?
Posted by Nicole at 12:04 PM