Anyone who has every knitted something that needs to fit has been in the situation I found myself in this morning. 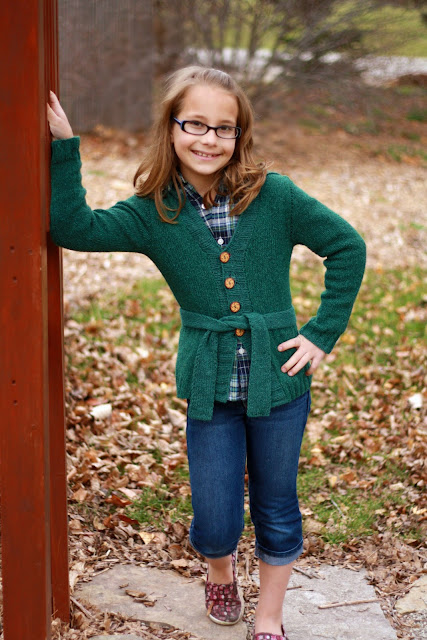 I finished all the knitting for my adult Hearth Sweater yesterday.   (Bigger version of the sweater pictured at right).  Husband and I had a dinner & coffee shop date last night where I worked on weaving in all the ends to the sweater, so by the time we came home, it was ready to block.

It was like Christmas morning when I woke up today and ran down to the basement to see if my sweater was dry.  Hooray!  It was ready to go!  I grabbed it from the blocking table and ran upstairs to put the finishing touches on - two buttons needed to be sewn to the back to hold the belt in place.

I laid it out, marked the button holes, and sewed them on.  I tried it on and - well - the buttons were a little too far toward the sides.  So I moved them in a half inch - still far enough apart that the belt wouldn't sag, but a little further from the sides.  Tried it on again and it was....um, it was ok.  The buttons still weren't as close together as I had intended.  I took out my ruler and found that they were 8 inches apart instead of the 6.25 or 6.5 I meant them to be.

I stood in front of the mirror for a solid three minutes looking at the buttons and telling myself that they were fine.  Maybe it wasn't what I had intended, but it didn't look bad at all.  I couldn't figure out what had happened with the blocking - I blocked the first 12" of the belt after my first night of working on it to see if it would stretch, and there was no difference at all!  When I finished my 58" belt, it stretched 8 more inches when I washed it!  I know swatches lie sometimes, but that was ridiculous!

So back to me standing in front of the mirror:  The buttons were fine.  They were functional, they were on the back of the sweater (not creeping over to the sides)...they just weren't as close together as I had meant for them to be.  And on top of that, my belt was really about 6 inches too long on each end.  It looked like a bathrobe belt rather than a chic sweater belt.  But who would even notice that, right?

I would.  I wanted to wear that sweater today.  I was really looking forward to it being finished.  But I knew that every time I wore it, the long belt would look weird to me, and I'd notice that the buttons weren't where they were supposed to be.  I'm not a perfectionist in real life (teaching junior high cured me of that!) but I do believe in doing things to the best of my ability.  And this finished project wasn't the best I could make it.

So I reluctantly took the sweater off and went about the business of fixing the belt.  It required me to open up the double-knit belt at both ends - on one end I just cut off 6 inches and bound off again.  On the other end, I had to putt out about 20" of work - back past the button hole on that side so I could redo the button hole row closer to the existing hole, then double-knitting the rest of the belt length on that side.  I worked on it for an hour or so this morning and have another 14" or so to go.  If I'm lucky, I'll get a few hours to finish it up tonight, but it'll definitely be done tomorrow.

And when I finally DO get to wear the sweater early this week, it'll feel great because I'll know it was made exactly right, perfectly fit to me, and I'll know it was done to the best of my ability.

In the meantime, I'm doing some work on the adult pattern this afternoon.  My hope is to have the test knit posted by the end of this week!
Posted by Nicole at 2:53 PM