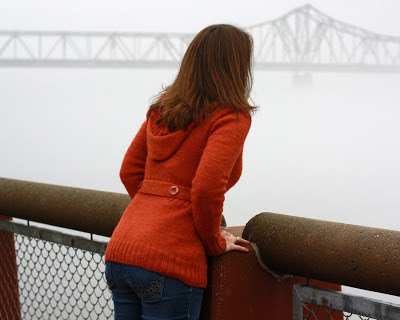 I woke up this morning to a very dreary day.  The temperature here is trying to move from highs in the 20s and 30s last week to a high in the low 60s by tomorrow.  And in Illinois in January, that doesn't happen without some stormy weather.

When I saw the warm forecast, I thought, "Yay!  That'll be a great time to reshoot the photos for the Hearth Sweater without having to freeze!"  And when I saw the overcast skies today, I thought I'd take my chances, drive to the location I wanted to use for the shoot, and see if I could get some pictures taken in between showers. 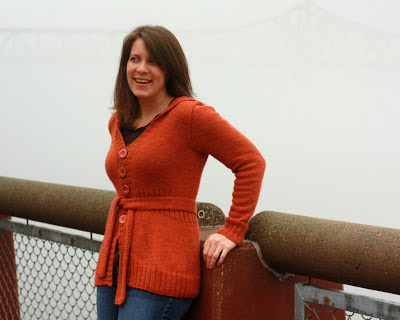 When I arrived at the riverfront, it was super-foggy.  But just right at the river.  If you moved 20 feet away from the river, there was no fog at all.  So I got nice, clear pictures with mother nature providing a thick gray backdrop. 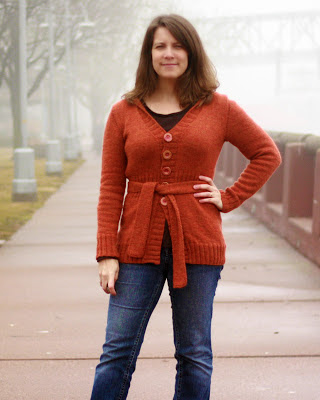 This shot was taken about 10 feet from the river.  You can see that it's still a little foggy, but when I moved another 10 feet inland.... 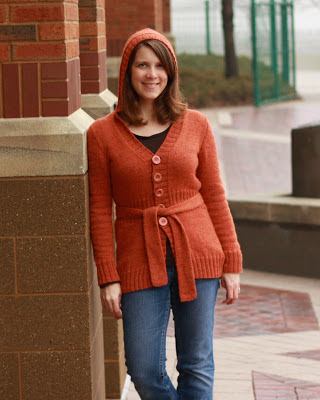 ...the air was nice and clear, with perfect diffuse light, even though I took these pictures right at high noon!

Completely off the topic of knitting, there seems to be no real news in Peoria, IL today.  While I was shooting pictures, a man approached me and introduced himself as being a photographer from the local paper.  He asked if I was on the riverfront taking pictures of the fog and wanted to know if he could take a picture of me taking a picture of the fog.

And so I kept on shooting.  The photos I took while he was watching me were just terrible....it's bad enough letting my husband take my pattern photos, but I was way too self-conscious with this newspaper photographer watching me.  Hopefully he'll use one of the shots he took of me playing with the settings on my camera, rather than the ones he took of me doing my modeling thing!

One of the "culture shock" moments I had moving to Central Illinois for college was watching the local news.  My hometown is about an hour south of Chicago, so I grew up watching the Chicago news.  Fires, murders, robberies, big cultural events...those are the kinds of stories you hear about on the Chicago news.

I remember watching the Central Illinois news in my college dorm room and being absolutely floored that the newscaster was talking about "corn and pork belly prices" and that news stories were things like, "They're doing construction on such and such road" or "The Mayor attended a breakfast at the Civic Center this morning."  Where were the stories about gun fights?  Where were the stories of political corruption and suspected arson?

It's almost 20 years later and I'm happy to be living in an area where the nightly news isn't a parade of horrors.  And even though I still laugh a little when the newspaper covers stories like, "Today it was REALLY FOGGY", I know I'm blessed to be able to raise my kids here.

So, if you're local, look for me in the Journal Star tomorrow....and don't laugh too hard if he uses one of my "this is super-awkward that you're watching me pose" photos!
Posted by Nicole at 2:53 PM