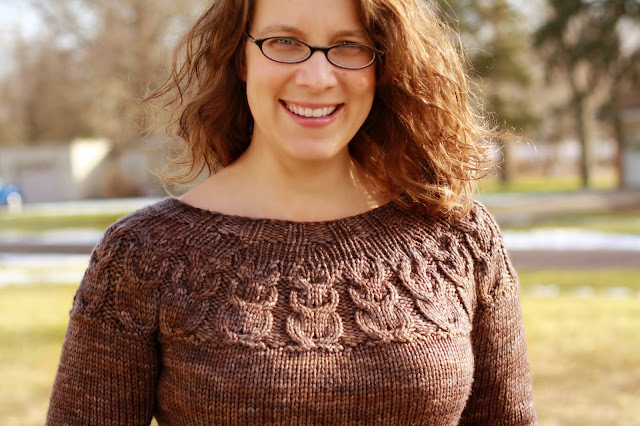 The famous Owl Sweater has been on my list of things to knit for about 2 years now.  I have always loved the look of it, but I don't often knit other people's designs for myself.  It's not that I don't want to knit All The Things...I just tend to be a work-aholic in the way that if I'm spending a good chunk of money on yarn and many hours to work on a project, it's probably one of my own design ideas.

So I've been saving this project for a special occasion.  That day came this fall when I found out that my LYS was doing an Owl Sweater knit-along.  I thought, here's my chance!  I'm going to do it!  And I set out on a search to find the perfect yarn.

I've been having some hive issues lately, so I've had to become extra-finicky about what fibers I wear.  I love, love, love the look and wool and the bright & varied colors it is available in, but I started to react really strongly when I wear many 100% wools and certain high-wool-content  blends.  But I knew that the People of Ravelry would help me find something that would work even for a sensitive girl like me.

I went to the "yarns" tab and typed in "Bulky".  Then I sorted the results by "highest rated".  There were almost 5 pages of results for bulky yarns that were rated 5 (out of 5) stars, so I went through and started reading the comments.  I was looking for one where more than a couple people mentioned how soft the fiber was and/or how nice to wear it felt.

A few pages in, Springvale Bulky caught my eye because I had just finished another sweater that used Three Irish Girls yarn.  The yarn page on Ravelry only had one (very complimentary) comment, but I decided to take a chance on it based on the fact that I was so happy with the Adorn Sock yarn I had just finished using. 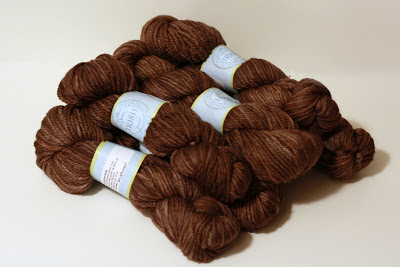 I knew I could order the yarn through the Three Irish Girls website, but I wanted to support my LYS, so I placed the order through them.

A few weeks went by, and because I follow Three Irish Girls on Facebook, I knew that she was relocating the yarn studio from a seedy part of town to a lovely new space far away from the bar brawls that she apparently had to witness outside her door occasionally.  A few more weeks went by and she made the move and wrote about getting set up in the new space.  By this point, I had missed the knit-along month (which was fine...I wasn't anticipating having any major troubles with the pattern that I'd need help getting through) so I decided this would be my "for fun" knit that I'd do over the Christmas holiday.  But alas, at the last knit night before Christmas break, the yarn still wasn't in, so I just kept working on the samples I was in the middle of.

Imagine my surprise when I got an e-mail on the Saturday before Christmas letting me know that my yarn had arrived!  She said that the yarn shop would be open until noon that day if I wanted to pick it up.  I checked the time.....11:37.  And the yarn shop is about 20-25 minutes from my house.  They were closed the next day, then Monday (Christmas Even) and Tuesday (Christmas).  I had plans to be out of town until Thursday or Friday, but a feverish kid changed our plans.  So I was in town the day after Christmas and I picked up my yarn as soon as I had the chance!

I would say that this sweater probably took me 15 hours total to knit.  I typically make things from very lightweight yarns, so working with bulky really made this project fly.  I had the body done in 2 days, then each sleeve took me 1 evening.  Once I joined the sleeves to the body and worked the owls, I think it was about 2 hours before the thing was completely done.  It really was a breeze.

I can't really say too much about the pattern, only because I followed it in the vaguest of ways.  I was knitting at a gauge slightly off from the pattern gauge, so I had to re-figure all the numbers.  (I tried it at pattern gauge, but I just thought the fabric I was getting was a little too airy.  I wanted a sweater that wasn't see-through at all.)  I got lucky and my re-figured numbers were really close to the ones she used for the size 38", so I was using those stitch counts as a touchstone to make sure I was on track. 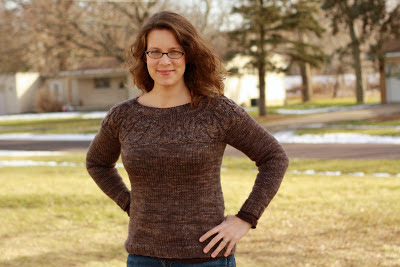 I extended the body (to 25" total) and the sleeves (19" and I should have probably gone for 20" or 21"...for some reason my normal sleeve length just looks a little too short with this bulky yarn.)  And I changed the proportions a little because I don't like my waists to be quite as clingy as Owls is meant to be.  I think I did a 37" hip, a 33.5" waist and a 36" chest.  Hip and chest are pretty snug-fitting and the waist has a few inches of positive ease.  I also relocated the increases to the sides instead of doing them as written (this was from a suggestion on a project page by Caruba that I found very helpful.  Be aware though that the pattern has been revised since Caruba made her sweater, so some of her suggestions are now included in the pattern.)

If the rest of the pattern instructions are anything like they were on the page with the yoke instructions (including the chart for the Owl cable), it was very easy to follow, very complete, and I had no trouble at all with it.  It's no surprise that this pattern has more than 6000 posted projects on Ravelry.  Kate Davies did a fantastic job with the design and the pattern writing, and I am feeling very pleased with my result.  I think this was an instance where I had exactly the right yarn paired with exactly the right pattern.

As far as how wearable the yarn is...so far I haven't had any trouble getting hives from this sweater (and I'm really hypersensitive right now).  I do wear a long-sleeved cotton t-shirt beneath it, but the sweater does directly touch my skin around the collar area and I haven't had any trouble with itchiness today or the one other time I've worn it so far.  I can't speak to how durable the yarn is, but it is knit to a pretty tight gauge, so that should help.  I'll have to wear it for a month or two and see how it holds up before I comment on that.

Now, all I need are my buttons to sew on a few owls for eyes.  I've got my eye on some from an Etsy seller that are natural wood - just a small branch sawed up into little discs with the bark still on with little holes drilled in the center.  I can't wait to add the finishing touch!