I am a BIG fan of testers.  I am fortunate to have worked with a number of testers who not only do beautiful work, but also understand that they are an important part of the pattern publishing process - questioning things that aren't written as clearly as they could be, asking me to double-check numbers that look suspicious (although, thank goodness, this happens less and less as I have gotten better at the math required when grading for different sizes), and asking questions that require me to think ahead about why I'm constructing something a certain way and whether there is a better way to do it, so I can answer these questions knowing exactly why I wrote something the way I did.

Some tests have the personality of a knit-along, with testers posting lots of "in-progress" pictures and chatting with one another in the testing thread.  I like it when this happens.  It's fun to get to know the testers a little bit through the things they post. 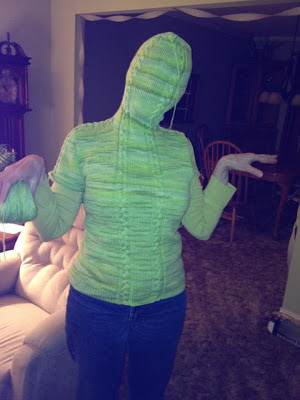 As this cardigan's name suggests, this test was a big "leap of faith" for quite a few testers.  I'm not sure of exact numbers, but my best guess is that for about 7 of the 10 testers, this was their first crack at steeking.  When one tester expressed in the thread (before volunteering) that she really liked the sweater and was thinking about participating, but that she had never steeked before and was pretty apprehensive about it, I posted a little pep talk letting her know that when I made the sample sweater for this pattern, it was the first time I had steeked, too.  I just approached it like, "People have been steeking their knitwear for hundreds of years.  They did it before they had all the resources I have available to me on the internet.  If they could figure out how to do this, then I can do it, too!"  I don't know if it was the pep talk or just her desire of the sweater that pushed her over the edge, but she got on board along with a number of other steeking newbies.  And boy, did we have fun with it!

If I didn't think too hard about it, I'd think that I kicked off the "Knitting Superhero / Rejected Blue Man Group Member" photos with this picture of my mom.  She was trying on the second sample sweater I made while the test was going on.  I snapped this photo of it on her while I was home for Thanksgiving and my mom, sister and I were sitting around being silly one night.  (And if you have a really good memory, you might recall me striking a pose in my own unsteeked Leap, back in the infancy of this pattern.) 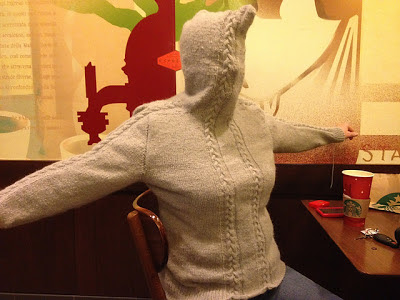 Lately, more of these pictures have been posted to our test thread.   And once I gave it a little thought, I decided that the testers weren't following my lead at all.  They needed to try the sweater on before they steeked it (because once you make that cut, you're not going back to fix anything!)  And it seems quite natural that you'd snap a progress picture at that point...it's the first time you've gotten to fully put the sweater on your body!   The "it really fits me" thrill still hasn't faded for me, so I assume others enjoy that feeling of being amazed that the thing they've spent so much time & energy working on actually came out the way they wanted.  Plus, in the apprehensive mind of a first-time steeker, she might be thinking, "Well, if this all goes awry, I might as well get a picture of all the work I've done before it all falls apart!"

By the way, check out Alibeee, hanging out in her gray Leap of Faith...was that photo taken at a Starbucks??  I bet she had a few gawkers during this little photo shoot. :) 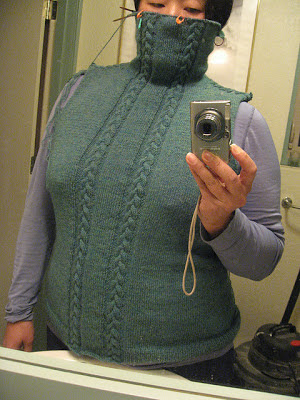 But guess what!  No one's sweater fell apart.  We used a variety of different fiber content, though I had suggested that they would want to keep the wool content pretty high for the easiest time with steeking, and every single cut came out just the way it should.  Not one tester had their sweater fall apart, or anything remotely close to that.

Yarn-dar, peeking out the top of her blue Leap, was traveling during part of the test, so her sweater has already been on vacation.  She was so dedicated and kind about posting a finished photo on time that she took it in a public restroom.  See - that's the type of awesome testers I get to work with!

If I knew where Yarn-dar lived, I would be tempted to go and steal her sweater.  She made it out of Knit Picks Palette yarn in the Tidepool Heather colorway.  It's one of those colors that catches my eye every single time I look at the Knit Picks site....then I think to myself, "Someday I will design the perfect sweater for that yarn!!" and I end up not buying it.  It's like when you buy one skein of the most perfect yarn ever when you're on vacation somewhere special, you bring it home, and it sits in your stash forever....because no pattern is perfect enough to use your most special skein of yarn to make it!  Seeing her sweater, I think I need to get over it and just buy the yarn for my next project!  (Whatever that might be??) 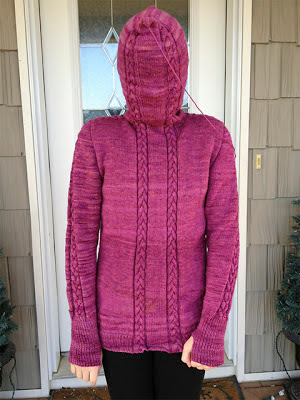 ShelbyWoo made this pink Leap for her daughter.  She said that when she tried it on her daughter at this stage and started taking pictures, her daughter asked why it wasn't open in the front.  She told her that it was finished just the way it was.  I'm not sure how long she had her daughter going with that line, but the thought of a sweater being finished like this makes me laugh.

In true teenager fashion, her daughter requested a change to put her own stamp on this design.  She wanted the sleeves long enough to cover the palm of her hand, with a thumb hole in each side so she could wear them like fingerless gloves.

I thought that was fantastic, and exactly like something I would have done if I was her daughter's age. 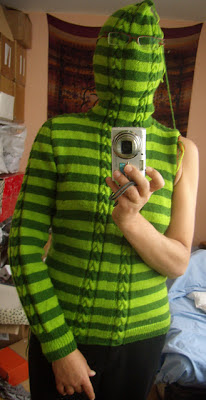 If this sweater was finished without the cut in front, I would look a lot like tatacharlotte wearing mine.  If you look closely, you'll see that she has her glasses on over the front of the hood.  After all, she wouldn't want to walk around without being able to see!

This was another one that I would totally want to steal, if this tester didn't live across the ocean from me.  I'm not even a green person, but I absolutely love the light & dark green stripes that she created with her Leap.  It was a great tragedy that she ran out of the dark green when she was two sleeve stripes away from finishing her sleeves, but she's taking care of the problem by unraveling the bottom row of the body and using that green yarn to finish the sleeve.  Even worse, she ran out because one of her dark green skeins was 10g light.  Rats!

So, all these wonderful testers (and more!) are working hard to wrap this test up by Sunday, and I anticipate publishing this pattern by next Friday at the very latest.  There isn't much editing that needs to happen to finish things up, but I am using the mac program "Pages" to do my layout for the first time.  (All my patterns up until now have been done using Microsoft Word).  The learning curve on a new computer program is pretty steep for a low-tech person like me, but I'm excited by the possibilities, and I look forward to being able to give knitters patterns that have a little bit fancier layout than I've been able to create in the past!