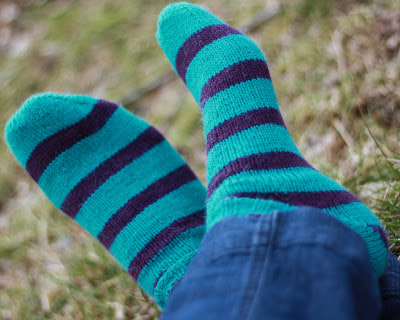 Here's what I've been up to this week:  my simple striped socks made out of Good For Ewe's "Sultry Steps" yarn.   I used the basic idea from my Blizzard Socks, though I omitted the ribbing in the foot area and worked these from the toe-up instead of the cuff-down.  But they're just a cast-on of 60 sts on #1 needles, used a short-row heel and knit up the leg until I was just about out of yarn.  (I had divided the yarn I had left from my Polyrhythmic Sweater in half before I began so I knew I wouldn't use too much yarn on my first sock.) I love the bright colors.  They'll be fun to wear in the dreary days of that can settle in during February and early March around here!

Last night I started swatching for a new project I am planning with another yarn from the Good For Ewe line, Claddagh.  It'll be a sleeveless sweater.  Something modern and cozy that you'd wear over a long-sleeved t-shirt when you need a stylish extra layer.  I know it probably seems early in the season to be saying this, but this project will likely have to wait until next fall to publish.  My pattern writing/sample knitting typically takes about 6 weeks, then it'll be another 6-8 weeks for the test knit on the adult-sized garment.  So even if I had all the yarn on hand today (which I don't), this design wouldn't be ready for publication until the beginning of April.  And by then, people are paying a lot more attention to warm weather designs than cozy winter knits.  So....this new project will be a long, long tease.....
Posted by Nicole at 11:58 AM